David finally got the new home server working, which means we get some pictures today!  Well, sort of.  Missionaries milking a cow?  What next?

Subject:  It's no use. The only way out is to chew your own foot off!

I just figured out how to get the new home server to work. As it turns out, I have to use internet explorer for it. Oh well. That's what I used before anyway. And the whole site seems to work faster and is, of course, just cooler. Well done. 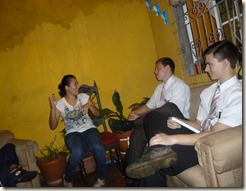 Also, I was reading through the general proposal emails that Dad and Lindsay sent around, but I haven't had a chance to look through the rest yet. I was planning on printing them off so I can read them during the week just for fun. For now, though, even though you all sound like desperate salespeople, I'm on board. Which means that Dad, being one of the more knowledgeable of all of us in these kinds of things will have to examine my bank account (do I even have money left?) and decide how much I can invest. And let me know. Basically I have no access to things like that, but I trust you to invest a sensible amount.

This week was a good one, but it was kind of bitter-sweet since we didn't spend a ton of time in our area. The mission itself still isn't doing very good. This month it looks like we'll be ending with only about 96 baptisms, although a bunch of those dates are for today. As of now we only have 89. That's a new record low. However, our zone has 16, which isn't bad for Chalchuapa. But we could have done a little bit better. 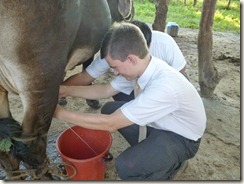 The really tough part, though, is that we had three dates for this last weekend: two in Panamericano, and one in Chalchuapa. I did the interview on Saturday for the lady in Chalchuapa, but she didn't pass. She isn't married, and her husband definitely still lives with her. I don't know what the Elders there were thinking. So now they have to get her married and baptized next month. The other two dates in Panamericano, Santos and Josue, passed their interviews. I did the interview for Santos, and he actually asked me to baptize him, so I showed up on Saturday for the baptism. However, he got really sick and couldn't do it. So that one fell until next week. And Josue had some kind of problem with the permission from his parents, so that one fell, too. So I spent all day Saturday in Chalchuapa for no reason. But I did get to eat a bunch of the refreshments that members had brought for the baptism. No complaint there.

Speaking of food, me and my comp decided something. We bought 120 pupusas on Friday (that's a lot of pupusas!) and threw them in the freezer so that we can just go grab some and heat them up when we're hungry. Best idea ever. 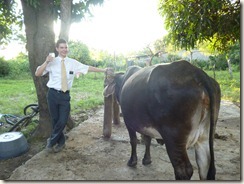 We also didn't work in our area at all on Tuesday, either, since my comp had to go to San Salvador so that he could be legal. So I worked in El Refugio with Elder Huaman, which is why I'm uploading pictures of us milking a cow. That was an interesting experience.
I just started typing in Spanish accidentally. That was weird.

Last Sunday Elder Adams and I were starving, so we decided to pass around a calendar for people to sign up to give us dinner. Of course the purpose was to find new investigators. But a pretty good number of people signed up. The only problem is that they didn't sign up for last week. They signed up for this week. So we have a dinner appointment almost every night this week where people have promised us new investigators or less actives. That's awesome.

We haven't really talked to Cindy much these days mostly because she's gone skateboarding all the time. It's gotten really hard to find her since the rain stopped. The Segovia family, which I might have mentioned before, hid last time we went to talk to them. We waited outside their house for over half an hour. Then we started shouting to them that we had seen them, so they sent out their 9 year old son as a messenger back and forth between us and them. How lame is that? So we dropped them.

We also have been talking to Griselda and Melvin. Griselda has come to church three times now, but she isn't progressing very well. She doesn't want to get married, and the last time we taught her she pulled out a bunch of anti-Mormon material that we had to combat basically. It was mostly her husband, actually, that was really set on disproving us. She seemed to accept what we were telling her. And it was a cool experience because we just stayed calm and followed the spirit. When I left I felt happy with it. At one point we just stopped and read the articles of faith, which are quite handy, actually. Who knew?

The really positive investigators that we have right now are Olga and her husband, who are basically set for a baptism the third of December, and the Cruz family, who hasn't been able to come to church yet because of work. But it looks like they might be able to come next week. We run up to their house every night to share a quick scripture since Alex, the husband, is quitting smoking. And they have been reading a bunch of the Book of Mormon, which is awesome. They're great.

Happy Halloween, by the way. It is exactly the same as any other day here. Sarah sent me a picture of her being a dead Ute, but I don't think she did the dead part as well. Maybe you should have gone for an axe in the head or something? And Julie was saying they're all going Speed Racer themed, which is awesome. I'm going as a missionary. Original, right?
Thanks for the emails, and for all of your support. It really helps out here. And I'm out of time, so I've got to send this off now.