David gets a new companion.  Or animal.  Or beast of some sort.  There’s some weird stuff going on in Sonzacate causing bad things to happen.  Still, the work in Buena Vista continues unabated!  (What a ride!)

Subject:  We've all got to die sometime, right? I guess I've just got to do it saving the world.

I have to explain something really fast. During the week, if I think of a really good movie quote I write it in my agenda. When it comes time to email, I just use the first one. I didn't mean to choose this one because of Grandpa, nor the twenty some-odd people that have died down here because of the rain. Nor the crazy mission stuff which shall be explained shortly. There, I covered myself.

So first, just so I can get this off, I have to say that this week has been nuts. Probably the craziest week of my mission. I have a brand new missionary companion, I'm having great success suddenly (probably because of him, not me), and it's been raining super hard all week. Here's the real kicker, though: I probably shouldn't give too many details about it, but I have to at least give an overview. I remember that Elder Oliverson was having a tough time in Sonzacate, and he told me some of the things that they suspected Elders were doing there. It was bad news. One North American Elder that I know pretty well (he was in my zone in the MTC) got involved, felt guilty, and confessed to President. One really awful process later, seven missionaries have been sent home, at least three of which (including the North American) have been excommunicated. Missionaries that I have known really well, and have even lived with (but none of my comps, so don't worry there). Another dozen or so missionaries are being investigated, most of which had direct involvement in some lower forms. And it doesn't stop there. A lot of church leaders in the Sonsonate/Sonzacate area have been wrapped up in this as well. We're talking bishops, branch presidents, high councilmen, etc. It's a huge deal right now, and I think the church is in a lot of trouble in that area. All the members do or will know, and we can all imagine how that will kill the work. President, as you can imagine, is pretty torn up about all this. We're going to have some multizones this week to talk about it. 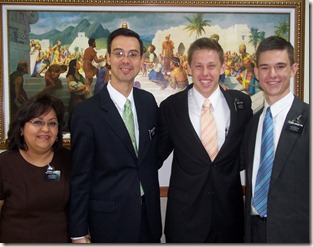 Anyway, on to happier things. On Tuesday, I got my new comp. His name is Elder Adams, and he's a beast. I love this guy. I am waiting for the office to send me the picture that they took of us, but if they don't that may have to wait until next week. I don't have a way of sending pictures right now. But I remember that that same day it started raining really hard. We were heading up this street that was basically a river, and there was no way to stay dry. I was contemplating going back to find another route, but he just looked at me and asked, "Where does that family live?" I pointed up the street, and he took off, wading through the water. He's a beast. And I swear, he's way better trained than I was from the MTC. And his Spanish is much better, since they've started sending the Elders to Guatemala.

Wednesday and Thursday we worked really well together, and we found some sweet families. They have some problems, but it looks like we'll be getting some baptisms together, at least. We've started to get a lot better at committing people to baptism on specific dates, too, so we have a few dead dates for November (they don't have church attendances, so it doesn't count as a live date). There wasn't anything super special, we're just working better together. And our planning and comp study is so much better than it was last change.

We did have this cool experience a couple days ago, though. The lady that washes our clothes has not been doing it lately since nothing dries in this rain. So we went over there to grab some of our clothes and dry it ourselves in front of the fan. There's a woman with a new baby that is her daughter-in-law, and she's always super nice. Her name is Olga. I had always just assumed that she was a member, but I hadn't seen her in church lately, so I invited her to conference, and I started asking her about stuff like that. As it turns out, she never got baptized. She loves the church, wants to get baptized, and was just waiting for her birth certificate to come from Nicaragua so that she can get married and then baptized. It was a long process (two years so far) but they finally have it. Her husband got baptized once, but never got confirmed, so he has to get baptized again. And yesterday we went to start teaching her, and right there committed her to be baptized on the 12 of November. Cool!

Alright, I got the picture attached. Good times.

I'm just about out of time, so I don't think that I have time to respond to all of your individual emails. Suffice it to say, though, that yes, Julie, missionaries act just like fat people trying to read mail. The football game was awesome. I got some great emails from Dad, Mom, Stacey, Julie, Sarah, and Elder Oliverson today, so that is fantastic. I loved them.

Thanks for all of the love and support! I know that things have been rough with Grandpa dying and all, but it has been amazing to be able to read Mom's account and just kind of sit back and see this as a part of life, instead of something sad or terrible. I really feel relieved, as well. We'll see him soon, anyway. Mom and Dad, you'll probably see him sooner. You're old.