A little (unstated) companion trouble, and the opportunity to train a new missionary!  Plus, encounters with a spider!  A big one!

Subject:  “Three days? How many sins could you have committed in three days? Come back when you have more time please!”

I saw on some kind of newspaper thing that they're planning on making a new Zorro. So I went home and listened to the (amazing) soundtrack. And now I wrote that quote. I just wanted us all to get a nice, warm, Zorro feeling.

And I also saw that Steve Jobs died. That's kind of horrible. I feel like that's going to be a pretty huge hit for Apple. And for the world. I loved the line that Dad sent me, though. Ha. Thanks Obama for the lack of Hope, Cash, and Jobs.

"Don't make me start it up again, because I will!"

There's a couple random quotes for you all.

So I want to start this week with a little bit of good news and a little bit of just news. The just news is that, for the last week, my comp and I have been pretty bad. I won't go into details, since I shouldn't, but ask me after the mission about it. Basically, though, he started doing some stuff that not only is against mission rules, but is completely against what President has directly told him, and it involves serious things. And I'm pretty upset about it because I can hardly control him, and the zone leaders are pretty upset at him because they can't, either, and we're all just kind of in this Mexican stand-off (Only we don't got no Mexicans!). That's the news. The good news is that I have changes this week. My comp is leaving, and I'm TRAINING! Who knew that one day I would train a new missionary? Well, statistically speaking it was bound to happen, but still. I'm stoked. And I'm kind of nervous because I don't even know what nationality he'll be. Probably a Latin. But he could also be a gringo... Gah! Oh well. I get to meet him tomorrow, during a meeting where President will decide our companionships.

Elder Duzett is also finishing training, right? That's kind of fun. And what's that about him teaching one of my families? I definitely don't know which one it would be. He's in Paraiso, and I don't follow my investigators well enough to know who moved where. But that's super awesome! I'll have to ask him about it if I get the chance. Get the family's name, though, just in case. 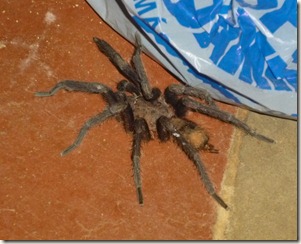 Oh my gosh, I almost forgot. Monday night I had the craziest time ever. I wish I could send the videos, but the pictures will have to do for now. I was sitting in my chair doing my reports, and I stood up and turned around, there was some kind of tarantula thingy right behind my chair. I flipped. That thing could kill me. I think. I called my comp over, but it was the first day of our having issues, so he was just like, "Deal with it." And then went to bed. Dang it. So I spent the next hour and a half trapping it under a pot, sliding it onto a piece of cardboard, flipping it over, dousing it with rubbing alcohol, and burning it. And I got a lot of videos of the process. But I'm uploading a few pictures instead, since the videos weigh too much (in Spanish that made sense). So I dominated a tarantula (horse-spider is what it's called in Spanish. At least here), without anyone's help. Take THAT! 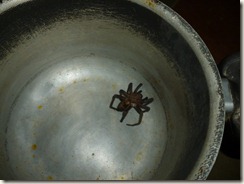 We were supposed to have interviews on Thursday, so we went and waited for almost two hours. And then President cancelled them. Lame.

I'm also uploading a few pictures of when we made pupusas with some investigators on Saturday. Good times. They're a fun family.

Sunday, despite our intense efforts this week to commit all of our investigators, nobody came to church! Gah! Just come to church! Why did God give us agency again? Oh yeah, I guess it's important. But it's also annoying.

We did find an inactive lady named Dora on Saturday that came to church with the BP's wife, so that was kind of cool. 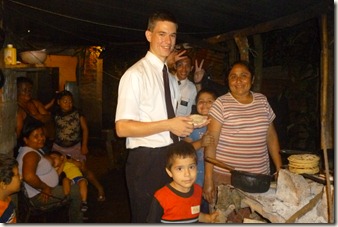 Oh. And on Sunday we had this ridiculous two hour meeting after church with some of the branch leaders and finally convinced them that they need to work with us. So we left Sunday afternoon with the EQP and the HPGL to visit some investigators. They enjoyed it, and now our investigators will have a little bit more support and more friends in the church, so maybe they'll show up.

Also, this week we left with a few different people, especially during the weekend, to find news. And it was completely fruitless. We did find a mountain of less-actives, though. Anyway, it was a little bit sad to me that we worked for so many hours to find new investigators and only came up with less actives. So we had zero new investigators this week, which is just about as awful as you can get as a missionary. Oh well. That means that we can only go up from there, right? 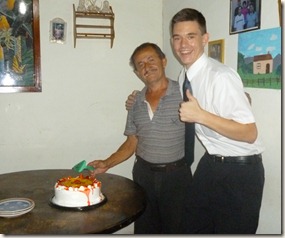 Our investigators are progressing a little bit. The most is probably the Acosta family (Francisco and Rosa, and their son and his wife Carlos and Mariela). They really enjoy us coming over and have told us that they've seen a big difference in their house lately. They don't fight as much. Cindy as well is progressing a bit. We decided to start pushing her more than ever, and she's starting to pray and read more, but she didn't come to church and she told us that, because of her boyfriend, the Law of Chastity is going to be a tough one. That's too bad. Oh well. Even if we fail there, maybe we're just planting the seeds, right?

So I hope that you're all doing great. It's rough that Grandpa is doing so horribly right now, but I know that it's just about his time. And I'm going to stay out here and focus on my work even more, just trusting that the Lord knows what he's doing over there.

Thanks for the updates, and for the package that I got this week! It's almost gone, by the way. Oh, and it had a problem in customs since it didn't have a customs label on it, which normally would seem like a bad thing, but they sent it through anyway. And, even better, I didn't have to pay the usual $2.50 for it. So disobeying customs laws saves you money. Go figure. That makes me a little worried for this country's national security.

I love you all, and hope that you have a great week!