In which the mission sets a new record.  But not a good one….

The good news?  We got a few pictures!

Wow. Wow. Did you all not just love conference? I was taking notes like crazy. My hand is still cramping from it. Awesome stuff.

So this week was a little bit lame. Mostly that was because of not having a lot of time on Monday to work (as normal), not having time on Wednesday because of an almost all day multi-zone (which was amazing as well), and not being able to work at all on Saturday, and only a little bit on Sunday (not that I'm complaining much). 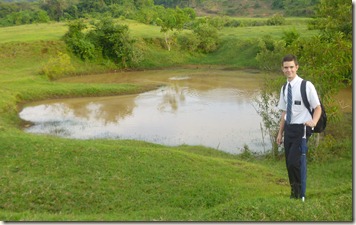 When we did get out to work, we did a lot of service projects with some recent converts and some investigators that we have. Alba, the recent convert, is making some plastic flowers to sell for the day of the dead here, and she's behind. So we went to help her with that a little bit, and while we were there, Rosa, who is completely inactive and her husband is an investigator, came over and mentioned that she, too, needed to make some plastic flowers. Hello, service week! We spent a few hours throughout the week helping both of them. With the few hours of work that we had to begin with, that meant that the numbers were a little bit low this week, but we did find eight investigators while we were working on those, and we built those relationships a little bit stronger. So I don't feel horrible. Just a little bit bad.

Cindy is a little bit disappointing to me now. I think we were focusing a little bit too much on fellow-shipping and less on teaching the gospel, and it hurt us. This week we wanted to undo that, so we watched the Restoration DVD and reviewed that a little bit, while at the same time inviting her to come to conference. It was a pretty good lesson, and I felt the spirit there, but I think that she was a little bit less interested in that than just kind of hanging out. We're going to keep going back this week to see what happens there, but it's just not looking fantastic right now. 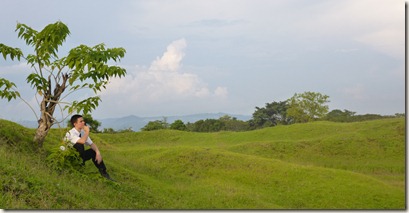 Another one that is a little bit frustrating still is Fransisco. He keeps telling us that he's going to come to church, and then he doesn't. We even go to get him, and it just doesn't work. I think that this is the fourth week straight that I've complained about that. But the worst part is that that's the same that happens to every single one of our investigators. We've even put some dates with people, but they just won't come to church! How lame is that, that people will commit to be baptized into a church that they've never visited?

We found a family this week of less actives. They are called the Rivas family. They're one of those families that the missionaries found a couple years ago, baptized the parents, and then they went inactive. Then more missionaries came, reactivated them, baptized the kids, and then they all went inactive. They straight-out told me that they stopped going to church because the missionaries that came later were boring. So we're going to try to reactivate them (since I am NOT boring), and try to make sure they stay that way. Which means that we've got to get them testimonies. And maybe they'll have to do some baptisms for the dead or something. 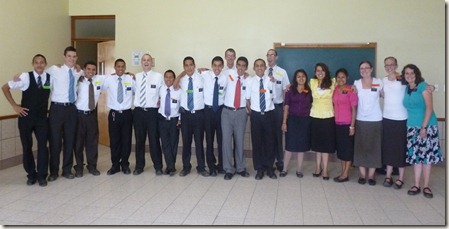 That's basically all I have to report from this week. Like I said, there wasn't much to report. Oh, but I will say this, too: our mission had a goal of baptizing 230 in one month. The closest that we had gotten was a couple months ago, when I was in the office, when we baptized 218. This month we were all excited to get it finally. How did we end up? 90 baptisms. Ouch. That's the lowest in one month that I've even heard of in this mission. President isn't happy.

In response to a few emails I got:

Julie, your email was hilarious. And thank you for your compliment about my handwriting, although yes, you should have noticed earlier. I don't write those letters, by the way, at the same time as my emails, so me having to respond to hand-written letters doesn't in any way make my emails shorter.

Also, I think I am mostly free of the Premature-movie-judging-Stacey-syndrome. Nasty disease, that one. Although, I definitely did not know who Will Arnett and Christina Applegate are, and your references to Blades of Glory and Anchorman didn't help. I only saw Anchorman once a long time ago, and I've yet to see Blades of Glory.

Your story of the CHT bus quote made me laugh really hard. I wish I was there to see the confused looks on the high school kids' faces, though. They wouldn't have understood. And yes, I will let you take me to Red Robin when I get back.

That was a lot of response. It was also a lot of email. So thanks for that.

Mom, you mentioned that you were fixing up the BMW and you replaced that light on the front that "somebody" had taped on. Yeah, that was me. I'm just saying.

But don't go taking that out of my mission fund or anything. I didn't run into anything. It just kind of fell out.

By the way, did any of you watch the world report between conferences? Yeah, they definitely talked about the San Salvador temple dedication. That's ours. And it was mentioned in conference. By the prophet. How sick is that?

Oh, and even more important than that: HAPPY BIRTHDAY! I didn't get you anything. Sorry. But you do share a birthday with two people in the Rivas family, so that's cool. I hope it's a good one for you. You'll have to let me know if I owe you any presents for these two years. I'll pick you up a capirucho or something on my way home.

Unless, of course, you come to pick me up! I'm still very much open to that. You'd just have to let me know when and such. Although, doesn't that kind of defeat the purpose of going if you aren't going to the Canary Islands first? Oh well, your call. And no, in June it won't have started raining here. Maybe a tiny bit. But this year it didn't really start until mid July.

Dad, your email was awesome as well, although I suppose that BYU should take part of the credit there. Wow. I was on the edge of my seat reading about it.

I, also, have no idea what a lumen is. But I think that more is better. Go for the new projector. Although, buy the old bulb, too, so you can gift that projector to me upon my return.
And I'm totally up to going to the Panama Canal. Is that still the USA's? I think we were supposed to give that up sometime.

I'm also stoked that Steven's team beat Hilhi. Those Trojans. We were bound to win. Good job, Steven. You did me proud.

And I didn't even know who Riley Nelson is, so I'm completely out of BYU football. Dang it.
Thanks for all the emails, though! I love you all!