Missionary work improving in the district in spite of cricket distractions…

BYU, you had me worried when you mixed up those poisons. But now that UCF is dead, all is forgiven.

I'm glad that they played better this time. It means that they are still on the road to being awesome when I get back.

This week was a little bit better. But not a whole lot. The good news is that I found a way to help my district. In district meeting I talked about each of their areas and where they need to improve. Then I had them make a list of people with whom they could do divisions. And then I set goals with them every day of the week for their lessons to find. They didn't always meet the goals, but it really boosted the numbers. They even did divisions once or twice, which basically doubles the numbers for that day. As you can imagine, it's a good thing. I'm really quite happy with it. They're doing much better. My own area, though, has seen a little bit less improvement. We did divisions twice, though, too. So that helped. 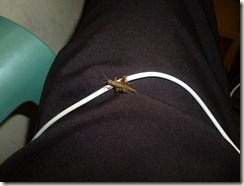 There's this cricket looking thing right next to the monitor, and it kind of has half of my interest. So sorry if I seem to have a lack of focus.

The problem continues to be getting people to church. This week we had zero investigators in church. That's the first time that that has happened since I got here. And for this country it's pretty bad. We are teaching a bunch of people, though, so we have the investigators, they just all keep bailing on us Sunday morning when we pass by to pick them up. This week it was everything from "I'm feeling a little sick" to "Today is Sunday? I thought it was Saturday...". Annoying. But we've started having another problem as well. Since we have a bunch of investigators that we're teaching, we haven't been finding anyone. That's not good, because if you don't find you eventually won't teach. We tried to fix it yesterday and spent over an hour looking for a reference in this three-block colonia, but we turned up with nothing. It was kind of lame.

Most of the investigators that we have are progressing pretty well, though. If you don't include coming to church. Cindy is probably the most positive, still. The last time that we went to visit her (after not being able to for three or four days) she had read the two chapters we had left her (Alma 36 and 3 Nephi 11), Alma 32, since we had been talking about it one time and she was curious, and had started from 1 Nephi and was half a chapter or so in. That's impressive. I know a lot of members who don't do that. She is still full of questions, too. I'm not going to lie, it's a little bit nerve-wracking to have an investigator like this. You'd think that it's super great, but it's kind of scary. It means that she already has a desire to at least find out more and look for a testimony (by the way, she told us that she had not prayed about the Book of Mormon yet because she's in the middle of some pretty frustrating stuff with some guy and just didn't feel like she could do it sincerely enough while being mad at him), and that we are here to help her with it. With normal investigators we kind of have to convince them to do it, which means that any success is attributed to us and any failure is attributed to their agency. But with investigators like her it's just the opposite. If she succeeds, it's because of what she has done and her desire to do so, and if she fails it's because we messed up somewhere. I don't know if that makes any sense, but it's kind of there in the back of my mind while we teach her sometimes.

Quick side note, though: the credit never really goes to us, of course. Which means that the failure never really goes to us, either. We just have to follow the spiri--oh my gosh, that cricket just jumped onto me. So I decided to take a picture of it and upload it here. It kind of freaked me out because I had no idea what hit me. But then it wasn't a big deal. Kind of funny, actually. Also, when I tried to flick it off of me it bounced off the wall and grabbed back onto my leg. See, it was funny.

Fransisco has been taught just about everything, but he won't come to church. Carlos and his wife are doing alright, and Rosa and her husband are as well. What really surprised me, though, was that last night we went back to an investigator named Griselda. Her husband, Melvin, was an investigator, but I think I already told you all what happened there. He basically fought with us and told us that he didn't want any more. He's still a super nice guy, by the way, so don't think he's not. But we went back to talk to the wife, and she had read the Book of Mormon! Not much, but still! That's awesome. We hadn't even left her anything to read. So she might progress, as well. And she told us that she was going to go to the Corn Festival, but it was raining super hard so she couldn't. Oh well. That's progress!

To finish up, I'd like you all to know that I finished my journal. Not my first journal, nor my second, my THIRD journal. That's every single day for over fifteen months. I bought five in the MTC, and I've finished the green, the red, and the blue. I'm now on the black, and by the time I finish my mission I'll be a good ways through the white one. Be impressed. That's huge for me. And I've definitely seen how great of a thing it is to have those journals. I was reading one or two days from my first one, and it was great to be able to remember those things that I probably wouldn't have remembered otherwise.

Thanks for the emails this week. Stacey mentioned this new I'm a Mormon thing that's coming out down there in Arizona, so I just wanted to let you know that it sounds like a great idea. In fact, I think I heard about that. And I think that I browsed the page and watched all of the profile videos. About fourteen months ago. I was in the MTC, as a matter of fact, when a guy came and announced it to all of us missionaries. He showed us a couple of the videos and told us how it would work. In the MTC I made a profile for it, but I couldn't upload pictures, which is required, so I couldn't finish. But every once in a while, in the office, we would go online and watch a couple of those. They're great.

However, I have two little thoughts. One is that we are supposed to stop referring to ourselves as Mormons, so I'm not sure how that works. The other is from a book that our branch president has (in English) called Here We Stand. It talks about how often times we, as church members, try to find common ground with other faiths to be more accepted. While it's good to be accepted, though, the author explained that as a salesman trying to sell you something by first convincing you that it's exactly the same as what you already have. Well if it's the same, why on earth would we buy it? He also talked about a man that he knew that was a catholic and decided to visit the church. All of the members fellowshipped him, but they were all just trying to convince him that they're basically the same. He left the church completely convinced of that, and said later that he had no reason to change if they're the same. I'm not saying that this new campaign is doing that at all, I just thought that was interesting. It was a good book, from what I read, by the way. I might have to read that later. So there you go. That's my spiritual thought this week. We don't have to find middle ground in preaching the gospel.

Also, I'm glad that Romney is looking good in the polls. I also have been a pretty big fan of him. The guy just makes sense. That's rare in politics.

Thanks again for all the support! I love you all!