Finally, the email arrived today.  And yes, David has news for us.  Among other things, he got a ticket while driving.  But I’ll let him tell all the “change” news…

Subject:  "I'm quite happy. Everyone wants to be me!"

Wow. I love this feeling of knowing something that none of you know, and all of you waiting for it. It's kind of cool. But yeah, something changed. And you don't know it. Unless you've been snooping around the home server...

So lets see. It's kind of really hard to remember all the way back to last Friday. The only really big things that I remember are things like my comp going to the dentist. Elder Huaman had a 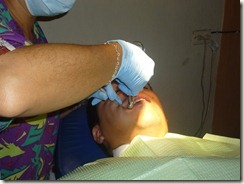 filling fall out, so we had to go get a new one put in, and while he was there the dentist decided that she should just fill in the rest of his minor cavities, which took several hours. Cool story, Hansel.

Most of the weekend was spent just going from investigator to member to less active so that Elder Huaman could say goodbye to everyone. Oh, I don't think I mentioned that. Or maybe I did. On Friday, before writing, we went to the office to finish up a couple quick things. President was there, who had been super super secret about changes. All we knew is that the office was probably going to change somehow. But normally Elder Gonzalez needs to know a week or so in advance who is going to Belize and things like that so that he can buy the tickets, and the assistants usually know changes Saturday night, but President Cordon was set on nobody knowing until Tuesday night. And changes happen Wednesday morning. The assistants finally convinced him to at least tell people on Sunday if they had changes without telling them where they're going so that they can get ready, but that took a lot of work. 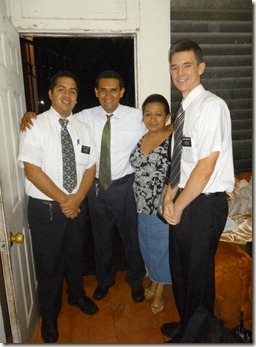 Anyway, we're in the office, and President calls Elder Huaman into his office. After a little while, Elder Huaman comes out super super happy to get five passports. By the way, President had been buying the tickets for Belize himself so that we wouldn't even know that. Anyway, one of those was for Elder Huaman. So President basically straight out told him he's going to Belize, which he's always wanted to do. Thus us going around so he can say goodbye to everyone. I was okay with it. The office is fun.

Sunday, we were teaching a lesson to a less active family, and the call came. Elder Huaman is staying in Trebol, Elder Arrington is leaving. What? President Cordon is nuts. And I don't mean that like crazy, I just mean it like super unpredictable. He TOLD Elder Huaman he was going to Belize, and then that. So the rest of the weekend we had to go back to everyone and tell them that, just kidding, Elder Huaman is staying. Please note that I still had no idea where I was going.

Also, Elder Gonzalez left the office as well. And as far as we are aware, President is getting ready to change Elder Huaman out mid-change, so he very well still could go to Belize. And just like that the old office ceases to exist.

My replacement, Elder Bailey, showed up a day late because one of the APs gave him bad information, so I had less than 24 hours to train him. Elder Oliverson was awesome, though, and left some voice recordings that walk you through absolutely everything in the job, so I only had to walk him through what I did to make it better.

Tuesday was my last day in the office. It was kind of sad. It was also the new missionary meeting, so since Elder Christner had forgotten to do a lot of the stuff he had needed to do and I was the only other one that knew how to do it, I spent a long time out of the office buying stuff and whatnot. But while I was out, on my very last day of driving, I got a ticket. How lame is that? I ran into a police trap where they were literally pulling over every car and writing tickets because everyone drives so horribly. I was talking on my cell phone, which I didn't even know was illegal here, and it was super stupider because Elder Christner had called me to tell me that Elder Huaman needed to ask me something, but that he didn't know what, so he had no reason to call me. My IQ dropped 50 points during that phone call. And I got pulled over for it. As crazy as it is, too, talking on your cell phone is a "very grave" offense, aka as bad as it gets (even worse than driving without a license or even driving without a motor)(I'm not even kidding, you get a ticket for driving without a motor in your car), so it came to a grand sum of $57. I don't know if it's that, the 4% annual late fee (yes, ANNUAL), me never driving again in this country (at least with that license) or the fact that all of the information connected to my license and the car I was driving is already wrong information (old addresses, phone numbers, etc.), or will become wrong when the office sells the Corolla and buys a Hilux in like 2 weeks, but I am very, very much considering not paying it. They've got nothing on me. Take that, horrible traffic law enforcement. I laminated my copy of the ticket, by the way. I'm proud of it, in a weird way. 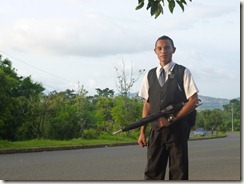 Okay, so back to the interesting stuff. I finally found out on Tuesday where I was going. And where I went, actually, since I'm there already. I'm now the District Leader of Buena Vista, Chalchuapa. It's a much less developed area than I've been in before, including Atiquizaya. There are no paved or cobblestone roads except the freeway that runs past it. The bugs (mostly spiders and mosquitos) are much much bigger and badder than before, and I have about a million bites to prove it. The house is much smaller and everything is just older. And I have never missed a microwave so much in my life.

My comp is Elder Funez, who is really great. He has a hearing problem, so he has an ear apparatus thing to help him hear, but he's totally cool about it. We're both really excited to be here and be comps, and we're working really great with the branch and together. The last missionary that was here did almost nothing, and all of the members and my comp know it. But now everyone is pumped. We just got like fifteen references last night from one recent convert family. It's great. 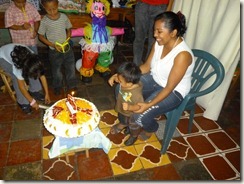 When I got to the area, though, there was one woman just about ready for baptism. She had been really against the church for a long time (all of her family are members), but when the temple was open she went through it and loved it, so she started meeting with the missionaries. I don't know which, but it could have been Elder Wardlow, who was also here just a little bit ago (right before he ended his mission about a month ago). Ever since then, she progressed really well and had a date for this weekend. So we just had to put together and pull off the wedding and baptism. There were some hitches we had to work out beforehand, but then the whole thing went really smoothly. And yesterday she got confirmed. The family is doing great. I uploaded some pictures of that. 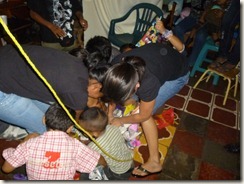 Also, I uploaded some pictures of a birthday party we went to for a few minutes. I was in charge of the piñata, and I have never seen anything so brutal in my life. These people, be they kids or adults, are carnivorous. As soon as the first candies started dropping from the piñata everyone jumped on it and started tearing it apart. I took some pictures that hopefully convey the massacre. In the end, we had to cremate him because there wasn't enough to bury. 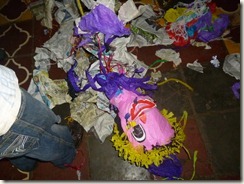 And that brings us just about up to now. Being District Leader isn't really that complicated, at least compared to working in the office, and I'm really enjoying the little bit of extra time I'm getting to write a little bit better in my journal or write letters (yes, I'm catching up on those now). I'm in charge of three areas: mine, Chalchuapa, and Panamericano (sisters work there). I mostly just ask and report numbers every night, and that's that. And I'll have to be in charge of district meeting.

We found some pretty sweet new investigators this week, by the way, but I'll have to talk about them next week. So you can all look forward to that. 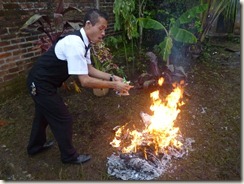 I bought a new umbrella. The raindrops here were passing through my small one, so I bought a sturdier one. It was like $5. For all of you that wanted to know.

Also, those shoes with the holes in them are my favorite ones, but I'm still rotating them every day. I never use the same ones twice. Those ones just wore out the fastest. And I'm way ahead of you on that front. The same day I took the pictures I sent them to a "poor Salvadoran shoe repairer" who fixed them up and had them ready for me to pick up the next day. $10 for a practically new set of shoes is awesome. 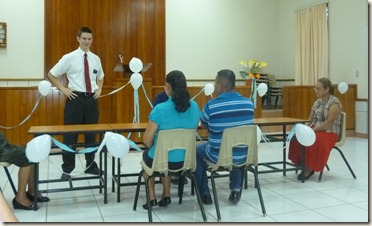 And if you're getting a package together, I wouldn't mind some more of those Pilot G-2 pens that are the best ever. I swear, half the Elders in this mission have been asking me where to buy those. And I'm down to my last three or four.

Thanks for all of the updates on the family, the screen, and football. Smaller screen? I'm not sure how I feel about that. But the game sounded intense, and the family sounds awesome. Michaels job sounds really long and tedious. I don't think I would be able to do it. But if he can, I guess, go for it. Steven's game is a little sad, but at least he's first string offense. They get all the chicks there. And that's about that. The move went well, which is good, and Stacey surprised Julie. I lo 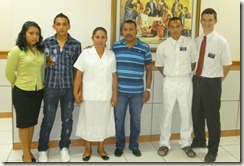 ve surprising people like that. We're good at that in our family.

Alright, I'll see you all next June. And write to you next Monday. Which is and will remain my PDay.

PS: Unless I go back to the Modelo zone again. Then it'll go back to Friday.
PPS: Monday being P-Day makes it really convenient to write me on Sunday...