Or wherever he is.  Turns out that there is a town in El Salvador called Buena Vista, but David’s not there.  He’s actually somewhere between his first city, Atiquizaya and the new mission office in Santa Ana.  I think Chalchuapa is actually the major town there, and David’s in kind of a suburb.  I’m the map, I’m the map!

Subject:  “Is this corn hand-shucked?”

I love that movie.

This week was great. And it sounds like it was great there at home, aside from two horrible football losses. But Steven at least is getting playing time, and BYU is getting experience for when I get back and can watch them dominate. So all is well in Zion, right? 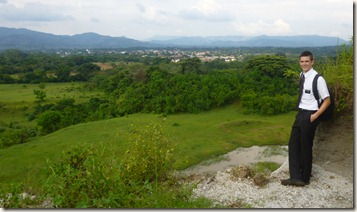 Wrong. That was a trick question. Go study the scriptures, any of you who answered yes.
Most of the news from home was just about people visiting and going home, so I have no response to that. Sorry. But it sounds like fun, and I just realized how great it is that we can travel and visit each other like that. Most people here can't. However, most people here never move away from the house they were born in, so it's not that bad. However, everyone here, and I mean everyone, has family in the states. Usually in Los Angeles (which everyone here thinks is a state), New York, or Utah, of all places. And most of them are there illegally, and don't care at all. And then they just tell me how stupid our border control is. Their logic: "If we all fit there, let us go!" That wasn't supposed to be political, just a funny thing I noticed.

Being a district leader is the best. The control and information and such that I had in the office was awesome, but I needed a break, and being district leader is that break. I am in charge of two other areas, and most of my job is just collect and report numbers every night. I also am in charge of district meetings every week, and other general things that my missionaries need. 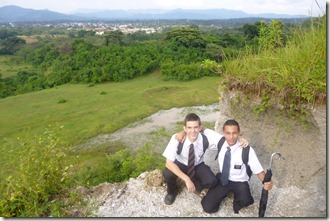 But more than anything I've been able to focus on my area and just work. And it's great. And really tiring.

By the way, the office was tiring. Juinior comp was tiring. District leader is tiring. I think we all see the pattern here.

In the MTC I was taught many a thing, one of which was the importance of goals. Everyone here in the mission that I've ever met plans their days out and then sets their goals of how many lessons they want to teach and such. But some always fall through, so nobody ever meets their goals. They told me in the MTC that would happen, and that we should put the goals first and then make the appointments so that we can focus on the numbers a little bit more, but none of my comps before have ever wanted to do it. With Elder Funez, we started. And it's awesome. We met almost all of our goals for the week. I think we made 7 out of 11, which is about 7 more than I've ever met in my mission. And some of those that we didn't make are things we don't have a ton of control over, like investigators at church, or overall church attendence. But we're working on those still. 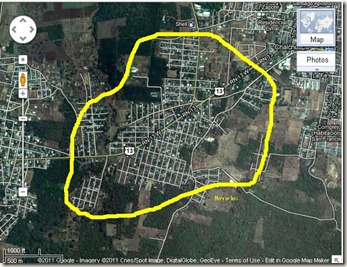 Mostly we just found a hoo-la of investigators this week. I think hoo-la was my way of saying a whole lot, but it just came out in my mind like that, so I typed it. Most of the news that we found were references from the members, especially the woman we just baptized, Alba. She gave us four that could get baptized in the next few weeks. The first, Fransisco, is a 50-ish year old guy who has read parts of the Book of Mormon and is pretty interested in the church. After our second visit with him we set a baptismal date for the 25, but since he didn't come to church this week we have to push it back a week. So not until October. By the way, the Area Presidency changed the attendence requirements. Now investigators have to come to church three times instead of twice. Thus the late date. Two more really positive investigators are two kids, Kevin and Jose. They are 13 and 10, I think, and have come to church on their own for two or three weeks already. The dad is an inactive member who drinks a lot, and the mom doesn't want us to teach them, but other than that they'd be in the font by now. So we're working on it. Then there's another Fransisco who has met with the missionaries a lot and was really close to baptism, but his mom said no so he decided to stop listening to them. He's like 25, though, so we'll see what's up with that. Then we got a couple more references for some other members, like Melvin and his not wife who have met with the missionaries a few times and 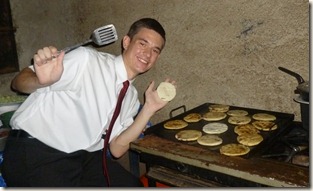 been reading in the Book of Mormon but didn't really go anywhere. Or Cindy, who has been reading the Book of Mormon already. Also, an 18-19-20-ish year old kid showed up to church yesterday with one of the members. He liked church and the class that we gave for principles of the gospel, and afterward came up to us and asked us to go visit him. We didn't want to be rude and say no, so we have an appointment with him tomorrow.

So there you go. Those are my woes with the new area. We just have too many references and new investigators. Actually, as great as it is to have all of those, I'm a little worried. We now have a lot to juggle, and how we do will determine whether or not the members trust us with more of their friends or not. And this week we have a huge corn-related missionary activity in the stake, so references will be a big deal there, too. From what I understand, last year over 500 investigators showed up. 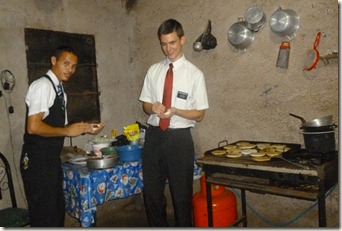 I'm running out of time since the rest of the zone is finishing up writing, so I'll wrap this up. I've attatched a couple screenshots that might be interesting to you all. One is a map more or less of my area, and the other is from when I just took a screen-shot of the google search I did for Buena Vista. What was the top result? Fun stuff. [see web search below]

Also, the pictures I uploaded are of me and my comp making some pups, and some pictures we took on a ridge up by the old Fransisco's house. We had to climb this huge hill to get to his house, and then found out that we had passed it at the bottom. But we got some good pictures. And that is why they call it Buena Vista. Because it's a good view.

I hope that you are all doing great still. Home is a fun place. And El Salvador is a fun place. You should all come visit sometime. After you can speak Spanish, of course. It'll be way better after you know Spanish. 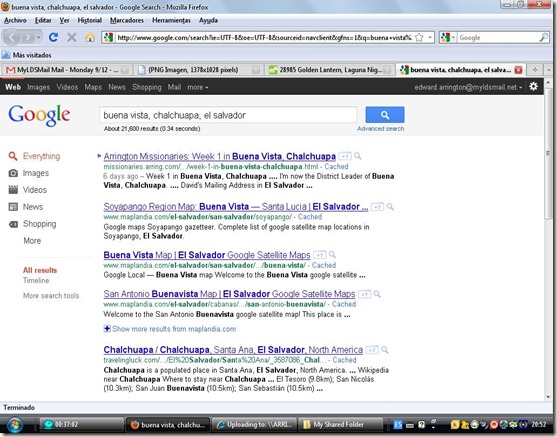