This week David gets news of the BYU/Utah game.  Sometimes you don’t quite win the game.  Same is true of missionary work.  Sometimes it’s hard.  Really hard.

NOOOO!!! I was so stoked to hear that BYU had another sweet win over Utah, but alas, my hopes and dreams were shattered. Thanks a lot, Utah. But it sounded like an awesome game. I wish I had seen it!

Okay, I have some logistical things to mention first. I have, over the last week, pulled out forty dollars from the checking account I have, and I want to explain it. One of my goals for my mission was to go the entire two years without pulling money out of that account until I wanted to buy something expensive, like a hammock. But last week I had 94 cents to buy food this week, pay for transportation, sending letters, and whatever else I needed to buy. Not good. So I pulled out twenty bucks, but found out that my account had received a reimbursement for one of our bills. So I had fifteen dollars. Then we went to get food, and I was talking to this guy in the line, and he was super nice and stuff. We talked for a while because the lady in front of us took forever, and when I had rang up my stuff, he just paid for my food. I was like, wha?? He just said don’t worry about it, and left. 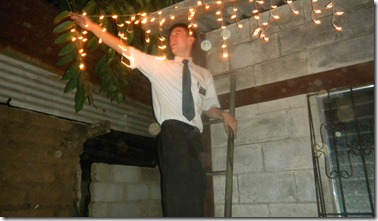 Sweet blessings. So I still have yet to use that twenty dollars I pulled out. But then today we were all expecting to get this month’s allowance, so to speak, but we didn’t. And I only have twenty cents now. So I had to go pull out another twenty, because we couldn’t go home first. So There you go. I’m trying super hard to manage my money, but this time it just didn’t work.

Also, Steven looks really tall in the picture that Dad sent me. Is that because he’s standing in front of super-short mom, or has he grown a bit?

I am uploading more pictures, and I’ll try out that new login. This week’s theme, I think, is "Random Animals that Shouldn’t be There". I just saw a lot of random animals this week, so I took some pictures. And these animals were in random places.

For example, the sheep are just in the middle of the road. The goats are in front of somebody’s house in a completely non-rural area. The crab just shouldn’t be there. They don’t exist here. The gecko is normal, actually, but it’s eating a spider, so that’s cool.

And I didn’t get a picture of it, but there’s some people who live close by that always just have a monkey tied up outside. I don’t know why. I guess, why wouldn’t you have a monkey outside?

This  week was a hard week. I’m not going to lie, the mission is really hard. Really hard. And this last week we just had no success. 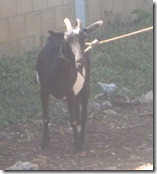 Nobody was home, we lost investigators, our church attendance dropped by almost thirty (in a ward of only a hundred or so), and things were just rough. There was a point where we literally just sat on the curb and cried. Yeah, I’m a baby. But that’s a really sad feeling, when you’re working as hard as you can and feel like you’re failing your calling. And we just didn’t know what to do to fix it.

There was a few highlights, though. First of all, the family that I randomly contacted last week when Elder Wardlow was kind of down are sweet. We’ve taught them a few times, and the husband especially is really interested. They’ve read parts of the Book of Mormon and have been praying, and the husband and his son, Jonathan, came to church yesterday. That’s an incredible feeling.

I really, really hope they keep progressing. I already love the family. Also, we finally found out that this one lady we were teaching hasn’t been wanting to get baptized because she doesn’t have a testimony. Well that would’ve been nice to know sooner, but now we know what we need to work on.

Last night we had Thanksgiving dinner, and there’s some pictures of it. The bishop of the other ward here sponsored it, and it was actually really good. We all got stuffed, which wasn’t hard since our stomachs have shrunk a ton, but it was super fun. And good. In the last picture I uploaded I’m on the left 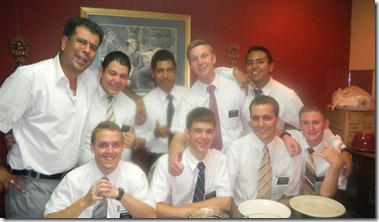 in the back, then Elder Sutton that has one less change than me. He’s Elder Winter’s new comp in Santa Ana. They came back for this because some girl that Elder Winters had been teaching wanted him to baptize her yesterday. Sweet. Then it’s Elder Hardy, who I live with, and has the same amount of time as me. Then Elder Marroquin, from Sucre. Next row is Elder Gonzales, who is comps with Elder Hardy. Then Elder Campos, comps with Elder Marroquin, and Elder Winters. Laying across their laps is the Bishop, who we all call El Tigre. He’s super funny. The Bishop’s Mom is on the right, and Elder Wardlow is front and center. 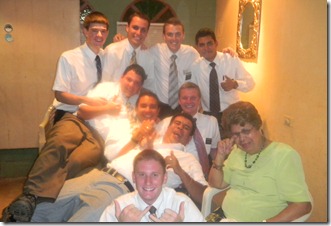 Also, some other good news is that Will, Henry’s brother, is getting out of prison today! He’s sweet, and we’ve missed him ever since he got picked up by the blood red van. I want to go visit him soon to say hi. Henry apparently will take a little more time, but we still pray for him. Last I heard, Will’s wife gave them both a Book of Mormon, and they’ve been reading it. Will’s already a member of course, but it’s still great. I really want to be here when Henry gets out so he can finally get baptized!

I feel like I’m really getting used to living here. The other day I pulled out my shoes to put them on, and there was a spider and a spider web in one of them. So I pulled them out and put the shoe on. It was no big deal. And then later Elder Wardlow and I were just sitting on the couch and this spider about the size of my thumb started crawling across the room. So we watched it. And that was it. Things just feel normal now. And I’ve gotten pretty good at killing mosquitoes, by the way. There’s plenty of opportunities to practice.

Alright, time to wrap this up. I’ll throw in another little cultural thing really fast, just so you can all get a little better idea of what it’s like. The houses here are all built together. There’s no room in between, so it all kind of looks like one continuous building. When people want to start a store or something, they just do it in their own house. So, consequently, there are a ton of places where you can just walk up to someone’s door and it’s a little shop inside. You stand at the door and tell the person what you want, and they give it to you. Cool beans. And it’s sweet, because they’re everywhere, and they sell bags of chips and stuff for ten cents. And chocolate-covered bananas. And ice cold bags of water. Oh, that’s something else weird here. Everything is in bags. Salsa, milk, butter, water, everything. If you go to buy a soda, they give you the bottle unless it’s a glass bottle. Those are worth a lot, so they just pour the soda in a bag with a straw for you to drink out of. It’s kind of quirky, but fun.

Thanks again for all the updates. It sounds like the trip to the everglades was sweet, and the trip to Arizona was relaxing. The football games were a little lame, but it was still good to hear about. I’ll try to work super hard so I can have some sweet stuff to report next week. Keep doing interesting stuff and telling me about it, by the way.

I love you all!
Elder David Arrington