Same old sense of humor, and still working hard.  David appears to be having some challenging times finding investigators, but also some successes as well.  Oh, and so much for the warm showers….

This week’s subject:  “What are the odds that trapdoor would lead me out here?”

Wow. I feel tired. I have no idea why, but I feel like the last week I’ve just had no energy. It’s a little bit lame.

Hey, before I forget, I had some news to tell you all. I get to call home in nineteen days. I’m sure you weren’t counting, either...

And really fast, I must express a little surprise. I hadn’t heard at all that Sarah is engaged. She sent me a letter in the MTC that said she almost was, but that they weren’t going to for a while because of some problem. That’s lame. As the king’s brother, I should’ve been first in line! So I’m a little funned out from that. Do me a favor and have a bunch of people text her saying that she should’ve told me. A lot of people. 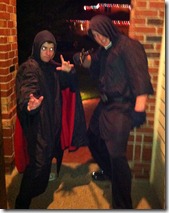 I was thinking a little about Adam and James coming over in ninja jedi sith thing costumes, and I have to admit, it makes sense. Why wouldn’t they? Seems pretty basic logic to me. And I love that that whole group just kind of snuck into the movie at home. That kind of makes me baggy. I miss stuff like that.

So, what’s with the chimp and the bug? Can we get back to me? First, we had a few major frustrations this week. We’ve had a pretty rough time finding new investigators lately, so we’re running out of them. Being a missionary apparently means you lose a lot of people. But we were teaching this one lady named Delmis. She had met with the missionaries for years and years, but told us that she never got baptized because she got offended and stopped coming to church. So we were working with her for five, six, seven weeks trying to get her to come back so she could be baptized. Then, on Thursday, we went over and she had completely changed. She said she knew she had to come back to church, and that she had left the old stuff behind her. She even told us that a few days before we found her she had had a dream with us in it, where we came and 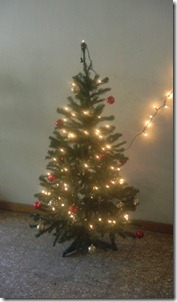 started leading us down a straight and narrow path. Cool, right? We thought so too. Until we found out she was baptized in 2004. Gah! And to top it off, she didn’t come to church yesterday. Brilliant.

We were also teaching this man named Ruban, who has been out of work for a few months because his arm got stuck in a tiling machine and broke in six places. It’s apparently rather painful. But he and his wife were sweet. He especially really wanted to learn and know if what we were telling him was true. Then, last week, we went over to talk to him and he had a friend over. The friend just kept trying to Bible bash us, but with stupid things. Like "If Joseph Smith was really a prophet, how does he fit into the parable of the great dinner?" Well, since that has absolutely nothing to do with prophets of any kind, it’s hard to answer that. But the next time we went over, this week, Ruban’s whole attitude had changed. He told us he wouldn’t pray about the Book of Mormon because only the Bible can be the word of God. And he threw out some scriptures for us, like the one in Revelations. Clearly he talked to this friend too much. But super frustrating. We’re planning a lesson right now that’s just focused on answering all these questions.

We were supposed to have some correlations with our ward mission leader and orient all the ward missionaries so they can start into the sweet ward mission plan we have. Nobody showed up. Nobody. That’s about all there is to say about that.

On Thursday we had a meeting in San Salvador. That was pretty sweet, actually. Good times. We learned a lot, and it was fun to see a lot of these missionaries there. I’m starting to get to know a lot more of them. I didn’t see Elder Duzzett, though. It was only with half the mission. Apparently he’s far away. And I hear just after he got here he baptized a family of five. Figures. 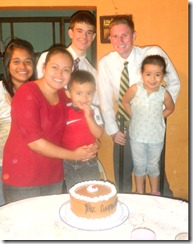 The good, though, was that we found a new investigator this week. One. But I think he may get baptized pretty soon. This month, if we can manage it. He already had a Book of Mormon, and had kind of studied it a bit, even though he can’t read too well. And he’s in super humble circumstances. And actually half crazy. But he really has a desire to follow Christ, and has a lot of faith. We challenged him to baptism in the first lesson, and he not only accepted, he stopped the lesson so that he could pray to find out if it was right. That’s cool. And then he came to church yesterday, and he loved it. I hope he makes it. He’s a really just nice guy that’s been through too much.

So that’s my week. Sorry if it sounded sad. I didn’t write it in a sad way, that’s just what happened. I’m actually in a pretty good mood. I love being out here and working for the Lord. There’s some pretty sweet times out here. There’s a lot of not so sweet ones, but still a lot of sweet ones.

I don’t even think I have time to respond to everything you guys did this week. It sounded super busy. I realized at some point this week that everyone is getting ready for Christmas there, and that you probably already had the tree. It was kind of weird, because here the only thing that reminds me that Christmas is coming up is that people throw stupidly loud fireworks at 3am that make it impossible to sleep. 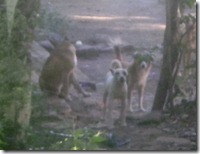 Hey, cool story. The showerhead I bought broke a while back, so we kept having to fix it and stuff. It was kind of ghetto, but worked. But last week it caught on fire and melted. There go our hot showers. But I’m getting used to the cold again.

As for pictures this week, I uploaded a few of our little tree. It’s a little sad, but we’re

missionaries, so we’re almost never home anyway. I also took a bunch of scenic pictures, and a few of a couple white trees that Elder Wardlow and I spent some time to throw rocks at one day since we were frustrated. And there’s a picture of some random dogs. And a lot of these random metal sculpture things.

People make those a lot, and there’s a good six or seven giant metal sculptures of Christ on the cross, and they’re more creepy than anything else. I’ll get pictures of those next time.

Alright, I hope you all keep doing great. Christmas sounds like a blast, and I’m kind of baggy now, but it’s great that you’re all enjoying it. Thanks for fasting for us, too. I’ll be more than happy to get those blessings, but hopefully I can send some back your way, too. I love you all!

Follow up: And I forgot to mention that some of the pictures are of a birthday party we  had for Bishop Retana’s wife, which was fun. And Bishop Retana is the old bishop who is now our ward mission leader. And I sent a picture of my scripture markers because they’re running out, so you could send me more of this same kind (maybe a couple) for Christmas. Just if you want to, and you haven’t sent me anything yet.