Week 17 in Atiquizaya – Can we hit the goals?

Great positive spin from David this week.  It sounds like they’re pretty focused on reaching their mission goals and that David and his companion will be contributing.  Can’t wait to hear more!  Oh, and we just gotta see that movie….

Subject this week was the same as last week.  Clever, but are we not paying attention?

Subject:  What are the odds that trapdoor would lead me out here?

So I’m slightly shorter on time now than I should be, but I’ll try and get something good out. The internet was having some issues, so I couldn’t get the pictures to upload, but now I got them. 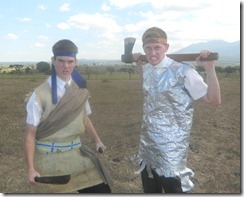 We went and finished the filming for this movie, and the last scene was a big war thing. A lot of the pictures are of the location, but there’s a few in there of me and my comp looking pretty beastly. And the other Elder standing in front of the landscape is Elder Hardy.

We lost a few investigators this week, which was kind of sad, but we also found a few. The mission has really been pushing to make the 2000 baptism goal and 11000 attendance goal, and we’re really close on both. We’re really pushing to get a couple investigators baptized this month. They already have the attendances, we just need t 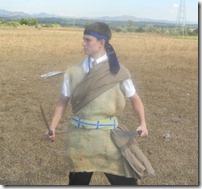 o do it. One of them we actually found on Sunday. His name is Luis, and he’s 17 I think. He’s been going to church for the last 6 months, goes to all the youth activities, and even plays soccer with us in the mornings sometimes. We just never knew he was n’t a member until yesterday. But we’ve got a date set, and I think it’ll work.

As far as Elder Duzzett goes, their success is great. I’m a bit jealous, because I kind of want to see a little bit of that success. But it’ll come, I suppose. And if not, at least I’m helping a few people. There are some great missionaries out here who are a 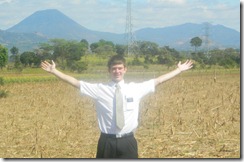 lmost done and only have a dozen or so baptisms. There’s also some with over 90. It’s weird, though, because a lot of the disobedient missionaries get a lot of baptisms. Like, a lot. They’re retention, though, is terrible. I know one Elder that used to be in my area. He’s kind of disobedient. He baptized some twenty or so in his time here, which was only six months, I think, but not one of them is still active. Okay, maybe one.

As far as the phone call goes, I think what everyone here does is just borrow cell phones. People here don’t have monthly cell phone plans, they do pre-pay kind of things, so apparently a lot of people have old cell phones without any more money on them. So we buy calling cards and borrow the phones and 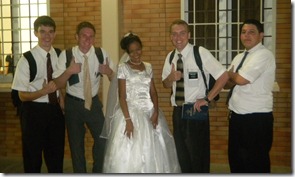 call. I think someone told me, too, that calls from the states to here are really expensive, but from here to the states is like 6 cents a minute. That’s not bad at all. So I think that’s what we’ll end up doing. I’m still not sure when we’re going to call. I’ll let you know next week so Dad can have the recording equipment set up.

It sounds like your days have been pretty crazy. Sarah tells me that Haley Bennett is now engaged, which is a bit ridiculous. Congradulate her for me. Here we had a wedding as well, as you’ll see in the pictures. The bride was an 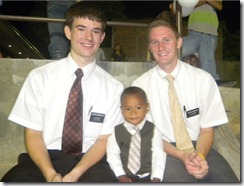 RM that we know pretty well named Chomi. It was all pretty great, and there was a lot of sweet food there. And the little kid’s name is Brandon. He’s the son of Will, one of the guys who is still in prison. The kid looked like a stud, so I took some pics. Sweet.

Alright, I’m running out of time. I hope you all keep doing amazing, and keep sending me pictures and stuff. By the way, I know it’s super expensive to send packages, so you don’t have to send the highlighter things now. But thanks in advance for the Christmas package. I’ll try not to open it until the 25. By the way, they celebrate the 24 here. Weird, huh?