David’s email this week is quite a bit shorter, primarily due to our call with him this week.  Yep, David got to call home for Christmas.  In fact, he was allowed to Skype, so we were able to do a video call with him.  It was great to do!

As you can see from the picture, we put him up on the big screen, which was probably a little overkill, but hey, why not? 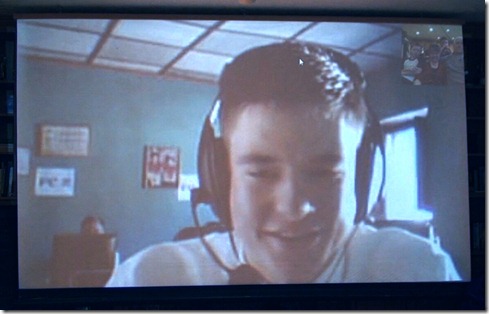 Julie said she thought he looked like a helicopter pilot.  LOL.

Here’s one that’s not full screen.  In the pic above, we can see ourselves in the upper right corner.  In the one below, we’re just below David.  Ya gotta love Skype…. 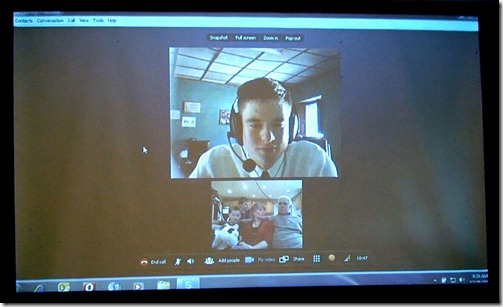 This next one’s pretty blurry for some reason, but it shows what it looked like when we had all six endpoints on.  There’s a window for David, of course, plus one for Julie, Emily, Stacey, Lindsay, and us, of course.  This was pretty crazy because it pretty much brought the network to its knees.  We ended up dropping people off and taking turns doing three at a time (where David and us were two of the three). 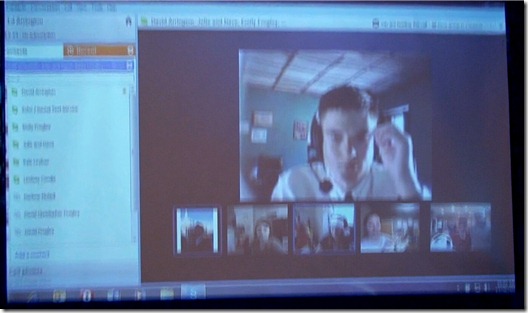 Anyway, we loved talking with David.  But enough about us.  Here’s his letter from this week:

I can’t really think of much to tell you all that wasn’t said on the 25th. By the way, it was super awesome being able to talk to all of you with video. Sweet.

Really fast, I have to tell Stacey something. That soundtrack is kind of like you said it is, but the music kind of makes you think, I guess. It’s not some huge orchestral thing like we’re used to, but it just has a thoughtful nature about it. That’s all I can think of to explain the way I think of it.

So on Saturday, after the call, we had an hour to get this baptism together. The only problem is that we had no baptismal clothes, the baptism form thingy was in Turin (far away), nobody knew about the service, the font wasn’t filled, there was no agenda thing, nobody to give 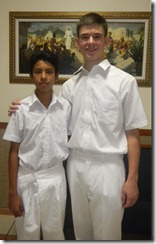 talks, and we didn’t have permission from the parents to baptize him. And we didn’t know where he lived so we could go ask them. Kind of stressful. We managed to pull it all together, though, and actually had a really good service. I did the actual ordinance, and everything went super smooth. I’ll upload some pictures of it all. It was cool, though, because we were  wandering around town in somebody else’s area (he doesn’t live in ours) just asking random people on the street if they knew a Luis Ernesto. Nobody did. At all. Then, with something like ten minutes left, we went down some random street and went to some random house and decided to knock there and ask. It turned out to be his house. So we got the permission. Cool story, Hansel.

The only other thing we did all week was eat a lot of food. 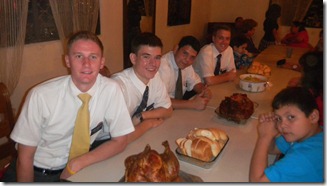 We had three different dinner  appointments on the 24th, and one on the 25th, but the one on the 25th was with this richer family that is known for putting together a massive Christmas dinner for the Elders. I think I have pictures of that, as well. It was super good, and we were all super stuffed.

So it was good to hear that everyone is doing well. I kind of got a little bit homesick seeing the house, but I think that is a little bit normal. And it was awesome being able to see all the nieces and nephews, especially Darci for the first time. I am kind of running out of things to say. 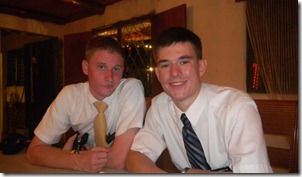 Really, I think this will have to do for this week. It wasn’t even really a week. It was two days. We had church. That was cool. Sorry. I promise, I’ll get a super cool email ready for next week. Until then, everyone should keep doing what they’re doing. (You’ve all seen real soldiers before, just...do what they do!)

I love you all, and Merry Christmas! And Happy New Years, too! 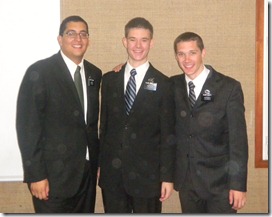 Ok, back to dad for a little post script.  In the pictures David sent this week there were two that he didn’t mention that I thought were worth publishing here.  First, here’s a picture of David with Sam Duzett, who David pretty much grew up with here in the Evergreen 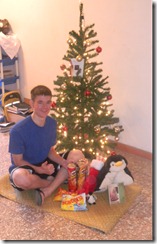 ward.  They’re serving in the same mission.  Sam is on the right.  I don’t know who is on the left. Seeing them in suit coats is a pretty rare thing as well, I’m told.

Second, each year after our family opens Christmas gifts, we get out the kids blankets (each one his or her own color) and set out all the Christmas spoils in front of the tree to take a picture.  David did that with the stuff we sent, which I think is pretty fun.  Our family will get a kick out of it at least.