Week 20 in Atiquizaya – in which David and his companion become Mission Heroes….

Movie quotes.  How does a guy who doesn’t watch movies remember so many movie quotes?  Perhaps its the “creative juice”?  We cracked up reading this one.

Subject: “Brothers and sisters! We CAN save Bosworth!”

“I should have known! A critter viper slag monster mutant!”

So this week was kind of back and forth good and bad. We ended the year this week, of course, which meant that it was our last chance to meet our goal of 2000 baptisms. I don’t know if Elder Duzett told you how that went, (he’s in Acajutla, by the way, where Elder Wardlow was right before coming here. They get bikes. And it is super hot, temperature-wise), but we were pretty close with only one Sunday left, so there was a lot of pressure on the whole mission to baptize. Elder Wardlow and I got ours, so we felt good. But we found out last Monday after writing that we had exactly 1999 confirmations for 2010. For 180 missionaries. For the whole year. We were short ONE. And no more Sundays to confirm. Ouch. 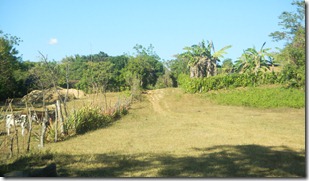 So, we worked pretty hard and found a few new investigators, but Tuesday night we visited this family that gave us some drinks. Elder Wardlow’s was called orchata, which is pretty good sometimes, but I’m not a huge fan, and they gave me some fruit punch type stuff. It tasted good, but it didn’t do very well in my system, so I spent the night throwing it up again. I got too sick to work on Wednesday or Thursday, but by Friday I was fine. The only really rough thing was that I didn’t eat anything at all (stupid, I know) for those two days, so not only was I really weak, my stomach had shrunk. So I hardly ate anything Friday, and Saturday we started our fast. Oh my gosh. Worst fast of my life. And yet, I survived.

Our schedule for sacrament meeting changed, so we start at 10 now instead of 8, and when we got there the room was already pretty full. Before, only about 20-30 people would get to church before the  sacrament, and the other 70-80 would trickle in for the rest of the meeting. This time, we ended up with over a hundred just for the sacrament. They didn’t have enough bread for them, so we used crackers. Also, my baptism from the 25th, Luis, blessed the sacrament. Sweet. Overall our attendance ended up being 128, which is a record for us. Good week. 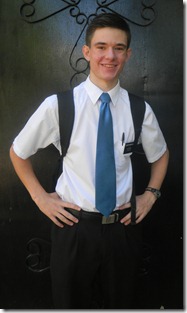 Okay, I’ve kept you in suspense long enough. Tuesday we go t a call from some Elders in Santa Ana saying that they needed our help. They had baptized a guy a month or so ago and he never got confirmed. Apparently he had moved into our area and they hadn’t been able to get a hold of him. They told us generally where they thought he lived, and we went and looked all morning until we finally found him, and we taught him about the gift of the Holy Ghost and why he needs it in his life. He’s a really sweet, humble guy that was really receptive and actually really worried when he found out he hadn’t technically finished his baptism. But we got it all set up so that the Santa Ana Elders could come down and rebaptize him and confirm him that same day. Thus our mission ended up with exactly 2000 confirmations for this year. Mission accomplished. “And then they made me their chief.”

“Gee, it’d really be nice to have some GRENADES right now, don’t you think?”

Well that’s about it for this week. We went up to a member that lives about an hour or so up into the mountains, so I put a couple more pictures up from that. And there are pictures of us four Elders in front of our house and chapel. 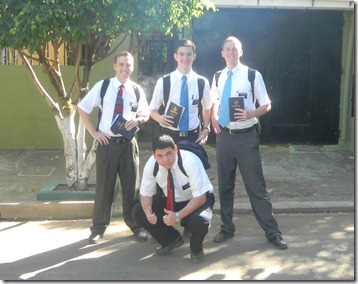 That’s Arrington, Wardlow, Hardy, and Gonzalez, by the way. Not in that order.

It sounds like everyone is still doing sweet, and I’m super excited for you all. Especially with how much free time you all have suddenly. I miss that. And Michael, I hear you tore it up at your board of review. “I know you would Simmons. Good man.” That’s all I have to say about that. And this: “We already tested it.” “We threw rocks threw it!” “And they came out alright, didn’t they?” “Yeah, but they were really hot, and covered in black stuff!” “So that’s what you’re telling me? You’re afraid of a little black stuff?” That is all. I don’t know where that fit into what I was saying, but do something with it.

“How did you get those?” “Where was she keeping them?”

I’m just full of quotes today. I don’t know why. Oh, and Michael, get those applications in. ASAP. College is too fun to miss the deadline. (“It’s violent! It’s educational. But mostly violent!”) 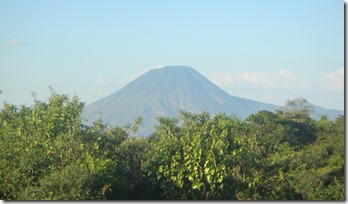 Alright, I’m running out of creative juice, so it’s about time to wrap it all up. I suppose you’re all doing well, so that’s good. I am, too, so don’t worry too much about me. I think I might start seeing a couple baptisms, too. Depending on how my investigators feel about their eternal salvation. But there you go.

I love you all, and really do appreciate everything you do for me. Oh! And I just remembered that if, along with the highlighters you were going to send me, you sent me some pens (Pilot G2s, they write way better than anything here. Much better ink) I’d be grateful. And really, don’t worry about what you put in packages. Even the Pringles are really good, because I normally wouldn’t buy them. Hey, maybe some Gatorade or Powerade powder mix stuff would be nice. And in case I forget, you could also send a Rubik’s Cube. We have one, but it’s really crappy compared to the ones in the states. REALLY terrible. And, maybe for my birthday, it might be nice to get a portable DVD player so I can show DVDs to my investigators. But if you go that route, get it really cheap. Dad, I know you want to get a nice one, but no. Bad idea to have an expensive one here. Just rambling, now.