Week 23 in Atiquizaya–A trip to San Lorenzo, on the edge of Guatemala

First I should point out that this letter follows the somewhat premature birth of Julie and Dave’s baby, so there’s a great deal of concern in the family.  As of this post, Baby James is stable, but still in intensive care.  We held a family fast for him last Sunday, which, of course, did not include David because we only reach him once a week.  But apparently everyone shared their feelings about the situation in their letters to him.

On the bright side, we got some great pictures and even a video!

Subject: “Jeepers? Mister?” “I was going for innocence!”

Wow. That was some intense email.

I guess the first thing is James. That’s some really unexpected news. So Julie, congratulations first of all. And Dave, too. I’m super excited to have a new nephew, as I’m sure you’re both excited to have a new son. I know that the circumstances are a little less than ideal, but I’m sure everything will be fine. It’s rough to see him like this, but pretty soon you’ll be taking him home and yelling at him for chewing on the remote control, or some other nonsense. That’s about all I think I should say about that, since I’m sure that’s all you’re hearing about now.

It was also a little bit sad to hear that Kyle’s team lost, but it happens. There’s always next year. And soccer. And it sounds like BYU is doing awesome, but I wouldn’t have expected any less.

Lindsay, I have to admit that your baby naming problem is a big one. Let me just rule out right now the name Renesme. I will not accept the child as my niece if you call her that. 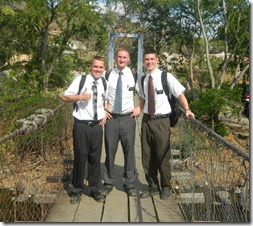 On my end, it was a pretty eventful week. First, on Monday we went as a District to San Lorenzo, which is a second area that the Atiquizaya missionaries are in charge of. There’s just a little branch up there right now, but it’s growing. They might even get a church building soon. It’s a really beautiful area, though. I took a ton of pictures, but the computer I’m on isn’t wanting me to upload them, so we’ll see what happens. You might see a picture of me on a bridge, though. That’s a bridge to Guatamala, and I’m literally within inches of being there. We actually had to get special permission from some military guys that were guarding it to take that picture, since we aren’t legally allowed to go there. Also, I’m trying to upload a video I took from the top of this mountain hill thing. It was super beautiful up there. 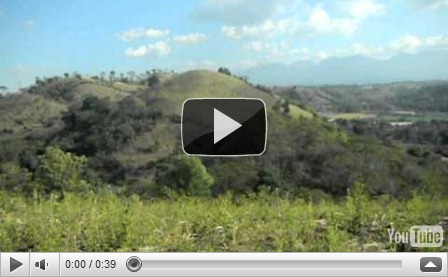 David in San Lorenzo on a hill

We had a baptism on Saturday for a kid named Herson Cruz. His family was innactive and we reactivated them, and then worked with the dad so that he could be worthy to baptize his son. We are super close to them, and it was an incredible experience to see the fruits of that. 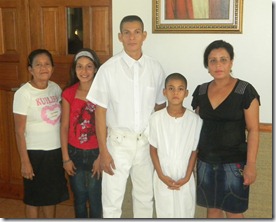 They’re now really active and all baptized. Also, the service was really nice because we had a combined one with Atiquizaya. They baptized one, and we baptized Herson and this little girl who is still eight, so she’s not our baptism. And she just couldn’t wait another year for it. How selfish.

On Sunday we had an interview for Alex Fuentes, who was getting ready for a baptism. He forgot everything, though, and didn’t pass. We have to go review it all with him, but now he’s kind of down, so I don’t know how good or bad that situation is. Hopefully we can still do it this week, though.

We are also teaching the family of Raquel, who is an inactive member. We had taught them before, me and Elder Reyes, but they didn’t really want anything. Now, though, Elder Wardlow and I are really tight with them, and they came to church on Sunday, and they’ve read their assignments, and they were asking us if it would be okay to start just reading the Book of Mormon from the beginning. Um, yeah! They’re really positive, and it’s refreshing to have investigators like that again. And this time it’s a whole family. Awesome. I don’t want to get changed out of this area just so I can help them.

Speaking of changes, they’re coming up next week. We were at a special multi-zone this week, though, greeting the president, and President Lopez just said out of nowhere to Elder Wardlow, “Pack your bags, you’re leaving.” Wow. That is oddly direct, and completely out of nowhere. But he had talked to him about going to Belize before, so we’re thinking he is. So I might be here again next week. Crazy times in the mission.

I also talked to Elder Duzzett, and he’s doing really well. He’s in a super hot area, but he gets bikes and he’s starting to baptize there. He’s a really good missionary, too. I can tell.

Alright, I’m running out of time and I’ve still got two emails to write. I’ll talk to you all later, and thank you to Lindsay, Julie, Mom, Dad, Stacey, Dave, the office Elders, President Lopez, and Sarah for emailing me this week!

PS: I haven’t been gone THAT long, Lindsay. Of course I still know what IAA means. I’m surprised you didn’t know that.