Well, there you go.  David’s been pretty sick with the Dengue/Malaria thing.  I have to admire his tenacity, though.  He’s never really been a complainer when he’s been sick, and this appears to be the case here.  He still went out to work a couple times.  Even in his letter, Dengue is the second item that he mentions.  Harry Potter is first….

So first, I have a question: Did Harry Potter 7 come out there? I’m pretty sure it’s out here, and nobody has said anything about it there, but I saw a little TV mini trailer thing about it and it looked good. I’m jealous.

Remember how I always say that there’s not much to report with the work here or anything? This week it is probably more true than at any other point in my mission.

So last Monday I was feeling sick. I mentioned I think that I felt achy or something. When I got home, I rested, but I had a fever of over 102 and my head was killing me. The next day I had sweat like a monkey and the fever had dropped to normal, but in an hour or two it was back up to 102 and I was all achy and nasty. It was pretty awful. The next day, the same thing happened, but they decided that they wanted me to go get an exam done to figure out if there was a bigger problem. They weighed me, measured me, got a urine sample, blood tests, the whole works, and just so you all know it was free because it was government healthcare. Normally I’m against that, but I guess because I’m American, or an Elder, I got rushed to the front of every line and had a personal nurse-guy walk me through everything. He also happened to be a member, so that was sweet.

So the tests came back later that day that I had Dengue, which I guess is the El Salvador equivalent of Malaria. I got my blood sucked by a mosquito that had it, so I got it. There’s not really a cure for it, but it makes you super sick and you have to wait it out for a week or so. Also, because of this thing my blood platelet count had dropped to 138,000, which is below normal and a little dangerous. So I was told I couldn’t work, and had to come in in two days, Friday, to get another test done. I would have gone Thursday, but we had to go to San Salvador so I could sign a paper and get fingerprinted and such (second time, now) so I could be here legally. Also, I forgot to mention that in addition to Dengue I apparently have a minor urinary infection. That sounds fun.

Friday the tests came back worse. My blood platelets had dropped to 106,000, and if they dropped below 100,000 I’d have to be hospitalized. That’s not fun. They told me to rest again, which I did, but I managed to sneak out one night to teach a lesson because Elder Wardlow couldn’t find someone for divisions.

By the way, the entire time this was happening our phone didn’t work, because the bill was super high and not our fault so the office said they’d pay it for us, which they didn’t do and they shut our phone off. That makes it hard to call people to do divisions with you.
Saturday I had to go to another lab since the public one was closed, and they charged me $6. My platelet count came back as 404,000, which doesn’t make any sense at all, so the mission nurse had me try a different lab. They only charged me $3, and they came back as 150,000. So there you go. If you want to be healthier, you really do just have to pay your doctors more. 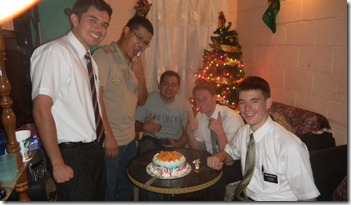 Since 150,000 was the low parameter of the healthy range, I was told I could work on Sunday if I felt up to it. I didn’t, but I did anyway. Absolutely nobody was there. We walked around our entire area countless times, and got nobody. Finally we stopped in for an 8:00 appointment with Jorge, this guy that is on the point of baptism. He said he wants to be baptized, but doesn’t want to set a date to pressure him. He’ll just tell us when he’s ready. That’s lame, but it was his birthday, so we ate cake. I sent pictures of it, by the way.

So there you go. I didn’t work for six days this week. And I may head over to get another exam done today because I still don’t feel good. But hey, I’m completely used to getting blood drawn, now. I used to hate that. Now it’s almost fun. But it’s painful, instead. I don’t think I should mix up those sensations.

One day, though, this lady in the Atiquizaya ward invited us over and fed us a ton, so that was sweet. And while we ate she put on the church’s version of Beauty and the Beast, which was really not very well made, but it was fun. I think I liked it because it’s the first full-length movie I’ve seen in a month. (We watched Johnny Lingo as a zone a month or so ago).

And, actually, I guess I saw almost all of National Treasure 2 on a bus to San Salvador, so that might count, too. 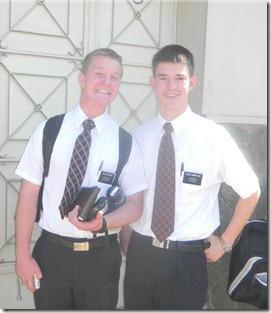 As for the customs, not much is different from what I’ve been telling you all. Or not telling you all. One thing that’s kind of weird, though, is that they have different hand signs to show you how tall something is. Or how big something is. For example, if you say that a person is yay tall, like the cat on the picture below, nobody has any idea what you mean. Instead, your hand has to be vertical with the fingers curled in, making some sort of bear claw looking thing. THAT’s how tall they are. But only people. Horizontal hand, like we do in the states, is for plants and other post-like things. Sideways hand, like you’re about to shake someone’s hand, is for how tall animals are. The picture of the hand holding the apple, minus the apple, is how you show how big fruit is. The upside down version is how big a chicken or bird is. Like I said, it’s a little much, but it’s funny.

So there’s my El Salvadoran culture tidbit for the day. I hope you all enjoyed it. And to try to answer one or two questions I remember, yeah, the other Elders are great. We get along really well, and I’ve gotten to know a lot from my zone and other zones. By the way, look up the blog of Elder Heaps, who is in this mission. Emily sent it to me or something, back before I came out. He’s a sweet guy, as it turns out, and he was in the zone next to us for a few changes. On his blog, though, there’s a picture of him and another elder with a really fat little kid and a sombrero or something. That other elder is Elder Wardlow. Crazy. 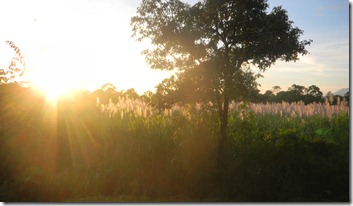 And yes, stupid things continue in the house. Elder Winters is gone, now, so things are more quiet with Elder Hardy, who came in the same time I did. However, before Elder Winters left he got our door jammed to the bathroom and Elder Wardlow had to climb out a really tiny window up next to the ceiling. That was super funny.

What other pictures did I send? Some of Jorge’s birthday party, and some scenic ones. Also, some from last week that I don’t think actually went up. 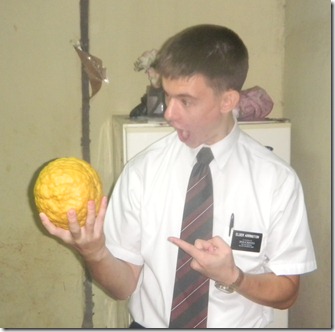 That giant yellow thing is a lemon. Crazy, the fruit here.

Thanks again for all of your love and support. I still love reading your emails, and although I’m a little disappointed that I don’t get to see my niece for a week, that’ll do, Stacey. That’ll do.

I look forward to whatever else you all feel like emailing me about.

And I love you all!

PS: My comp believes that in the Millennium, we won’t have money. There won’t be any business or competition, either. If somebody needs something, people will just go out and make it for them. Where does this guy get off? You can all tear up this topic, too. It’s a little more easy than the Satan one.

PPS: I love my comp, so don’t think I’m bashing him. But really, where does he get off?

PPPS: I got an email today saying that the president wants us to send more colorful and fun-fonted emails. Um, okay.