Week 14 in Atiquizaya – All better now!

So, we’re past the Dengue—um and it’s not Malaria—it’s apparently just similar.  Think Santa Claus.

Great missionary experiences this week including a David and Goliath movie, a wonderful finding and teaching experience, and the realization that we’re really spoiled.

Subject:  Oh, right. Of course it’s always about YOU, isn’t it?

I’d be a cotton-headed-ninny-muggins if I didn’t say something about little Darci first, so here it goes. Hi, Darci. Nice to meet you. You don’t know me, and can at this point probably care less about me than chewing on your hand, so I’ll just get to know you in nineteen months. Actually, eighteen and a half. Wow the time moves fast.

Stacey and Kyle, congratulations! I’m super excited about  my new niece, and that last picture really does remind me of Tarzan. Weird. Definitely fits in your family. Not that you look like Tarzan, but you get the idea.

So let me reassure you all of something. First, I never had Malaria. I had Dengue. I said it was kind of similar to Malaria. So I guess, in a way, I’m LIKE Santa Claus. We’re both giving, we’re both jolly, and we both work really hard, one day a year. Apparently Kyle knows what Dengue is, so ask him about it. Basically all that happened was that I got super sick for a few days. But I’m better now, and have been out working for a couple days. But not very many days, because just as I was getting over it, my comp got the same thing. That’s lame.

Let me say something else kind of lame really fast. Some of the Elders here don’t act like Elders, and it’s very, very frustrating. Me and a bunch of other people are all working hard trying to serve the Lord, and some people are just here goofing around, being super disobedient, not caring about what they represent. 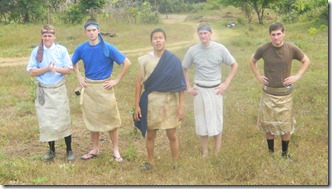 I honestly don’t trust some of these guys. A few of them have stolen things from me, including significant amounts of money and some of my belongings, which I’ve had to fight to get back. I still don’t even have them all, but I will. So that’s super sad that some people are like that out here. Also super sad: my cheap watch broke. And the watch that I couldn’t get the back on is still broken. And the other watch is one of the things that was stolen, so I don’t have a watch right now. How lame is that? And how lame is it that I can’t trust people who have been called and set apart to represent Jesus Christ? Okay, enough sad stuff. 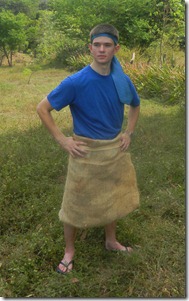 I attached some pictures of a few things, and I feel like I should explain them. First, the president wanted us to go make some videos as a zone so we can watch them at Christmas. Our zone (while I was gone) decided to make one about David and Goliath. I got a role as one of David’s brothers. So I’m in like two scenes, but that’s cool. So there’s pictures of me in costume and such. You might all get a kick out of that. But when we went to film, we were trying to go up to the top of this big hill, but there was a river that ended in a waterfall that stopped us. It was an incredible waterfall. I don’t think you can tell how far of a drop it was because of the angle, but I tried getting a video, too. But the ZLs got us out of there pretty fast, because water is controlled by the devil, and evidently being where you can see it isn’t good. That’s a little harsh, but seriously that’s why we couldn’t stay there.

So that was cool. I also had a cool experience I wanted to share. I’ve actually had a couple similar to this, but this is the first time I’ve remembered to share it. So first of all, we had interchanges with Turin, so I went and worked there for a day. When I got back the 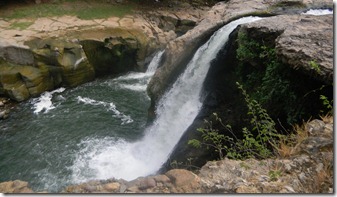 next morning, Elder Wardlow and I went out to work. He hadn’t really planned the day very well, so we had a gap in the evening. We decided we should go contacting, so we did. He was also feeling a little sick still, so he was just kind of following me. When we got to the end of this one street, he got kind of complainy, which is okay because he was sick, but he said that he just didn’t feel guided at all, and that we weren’t doing anything. He sat on the curb to think, and I just kind of stood there. And then I remembered a talk by Elder Bednar where he told us that a lot of times we sit and wait to be under the influence of the spirit, but really if we’re sitting and waiting we’re not under the influence of the spirit. So I just told Elder Wardlow to get up, and I just kind of started walking. I had no idea where, or what I was doing, or anything. But I was praying while I was doing it. We ended up passing this little mini cul-de-sac (It’s a French word meaning the bottom of something, but I don’t remember what) [that’d be “bottom of the bag”--editor] that we had never visited before. Technically, I’m not even sure if it’s in our area. Or anybody’s area. But I just kind of walked up to the first house I saw, and we contacted it. As it turns out, a lady lived there named Delmi, with her 8 year old son. We started talking to her, and she invited us in. Just then, her husband, Antonio, got home. We ended up teaching them both, and they were totally into the lesson. They said they’ve been going to a few churches, but none of them really felt right, so they haven’t joined one. They could easily accept the gospel, and we’re going to fight for them, because they were totally great. Isn’t the spirit fun?

Once again, thanks for all your support. The letters this week were fun, and I’m super excited for the BYU game this week. I can’t wait to hear about it! And to hear about how Darci is doing! And how the family in general is doing! I love knowing what you’re all up to. Steven, I’m glad you’re done being sick. Sick is stupid. And Michael, work is sweet, isn’t it? To all of the girls: Have your babies already! I’m really in an I-have-new-nieces-and-nephews mood right now, so get on that. Emily, your lack of pregnancy is a valid excuse, I suppose, but the rest of you... Mom, I don’t know how you do something so repetitive like those negatives. However you do it, you’re amazing. Dad, the concert sounded sweet, and I’m jealous. I want to go to another one of their concerts when I get back. And good luck on your home teaching. That’s important stuff, you know. Have fun in Arizona, I guess.

By the way, you’re all super spoiled. We’re super rich in the USA, and we forget that sometimes. I don’t think I’ve seen a house here other than ours that is bigger than our family room. Maybe with the kitchen attached. They’re like boxes. And you know how missionaries don’t want to leave their country? I don’t think I’ll have that problem. I’ll be ready to go back to spoiled. Just so you know.

Thanks again, and I love you all. Especially you, Darci!