Week 9 and already time for a new companion.  And some baptisms!  And more pictures!

Subject:  "And what? Taken all the REALLY big rocks? The scoundrel!"

As Dad mentioned in his email, "days go by slowly, but the months go by quickly." How true that is.

But it sounds like you are all filling that time with awesome things. Hearing about how busy you all are, I start to wonder just what the heck I did with my time before the mission. Time is short, so make the best of it. I'm starting to understand what old people mean when they say they want to make their kids understand how important time is. It's one of those things, where we always "know" that it's important, but you only realize just HOW important it really is after you lose it. 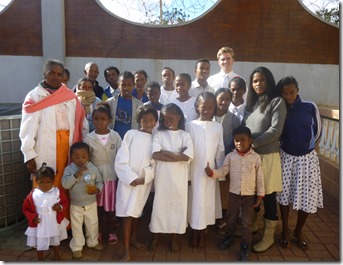 Speaking of which, Elder Razafimandimby and I have had a pretty awesome time here in Sabotsy Namehana. Solo never fails to astound us with awesomeness. For example, he told us that he wants to start learning from us every day. Literally, EVERY day. That's a bit much, but we compromised. We now teach him two or three times each week, and invited him to a class each Saturday morning, where the other elders teach Preach My Gospel. And he's way excited about it.

When we started teaching Solo he had asked us for a Bible in English, so that he could start preaching in English. I gave him a Malagasy Book of Mormon, secretly planning to give one in English later. That way, if he wants to learn English he will HAVE to study the Book of Mormon. However, when he met us last Tuesday he updated what he wants. He then and there asked us for a Triple (the "big Book of Mormon") in both Malagasy and English. It would seem that the Holy Ghost has helped straighten out his priorities.
So along with focusing himself on the Book of Mormon and learning from the missionaries Solo is still teaching his preacher friend, his wife, and now his son. We're planning to invite them to learn from us actual missionaries too, but apparently they think we're scary. The only reason the preacher friend won't accept us is that we use the Book of Mormon. Apparently it's a scary book that only cults use. Them darn Mormons. But things are going very well. 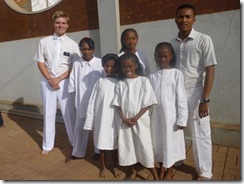 Including the baptism that we just had. Five girls, all of which had been shut down from baptism before because their parents are not diligent. Nevertheless, they have proven their personal diligence, and have therefore been found ready for baptism. So that's good. One of them even asked for me to baptize them, and to give the gift of the Holy Ghost. Cuz you know, I know how to say all that in Malagasy. Not. But I managed to get the job done, mostly with the help of the branch president whispering what to say.

We had a zone conference this week, and they showed this AMAZING talk by Brad Wilcox, about turning strengths into weaknesses. Seriously, one of the best talks I've ever heard. He explains that the Atonement will bring us back to the presence of God, whether we like it or not. The difference between somebody that is "saved" versus one that is not is that a "saved" person will want to stay there. People who are wicked and sinners will not want to be with God, because of all the shame and guilt that it would bring up to them. Thus, the work that we do in the gospel is not to come back with God, but to change us so that we will WANT to stay there with him. I highly recommend it to all of you. Watch it, read it, print it out and mark up the text. Study it. http://speeches.byu.edu/?act=viewitem&id=1966&view=2 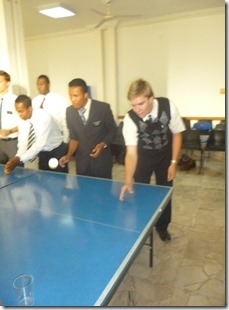 We also had something of a game night with our zone after the conference. The had a bunch of little games, including juggling three balloons at once so they won't hit the ground (which I won. I guess all that practice as a little kid paid off) and bouncing a ping pong ball into a cup (also one that I won. Pure luck). It was a blast, and even our mission president tried a couple of the games. Fantastic.

Transfer news came out yesterday, and Elder Razafimandimby is leaving me. Since before I left my last area, I figured that this transfer could end up with me training. I'm decent at the language, and everything just seemed like it would work out really well like that. Transfer news came out... and I'm not training. The downside is that I don't have a trainee. On the bright side, I will be getting another Malagasy companion, whose name escapes me. It's something like Elder Andriamanganoro. So that means that there will be me and my new Malagasy companion in the house, along with the Malagasy elder that works in Analamihitsy and his new companion. Who is actually a new missionary. This poor guy is going to have a rough time communicated with people in the house, considering that two of them are Malagasy and the other guy (me) has enough trouble communicating in English.

Moral of this story: if you assume you will be training when transfers come out, you'll be given a Malagasy companion. Which I am totally down for. Malagasies rock.

After Elder Andrianjarasoa heard that he will be training he got so excited that he dove on his bed. The fruit of this labor was similar to what happened in "the RM" when the "Tonganese" guy falls through the bunk bed. As this elder dove onto the bed, the mattress sunk down to the ground. It turns out there was just a little piece that had to be put back in place, so we fixed it pretty quickly. But it was really funny. 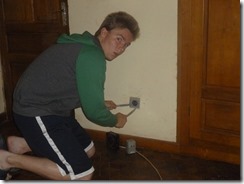 And that pretty much finishes up my week. Baptisms, transfers, zone conferences and parties. I also had a guy call me something way racist yesterday. Kind of the Malagasy equivalent of the “n-word". Fortunately I've been working on not getting mad at people for that, so me and my companion just walked away.

Having read all the emails that have been sent so far, I thank you all for the updates. I love hearing about life back at home as only a missionary can. Keep it up.

I just remembered that I never described this weeks pictures. 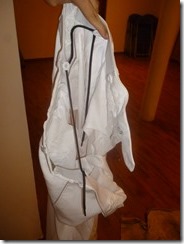 I finally found out that sticking butter knives into a power outlet really does make your hair stick up all Einstein-like. Actually that's just how it looked one morning. But it was pretty funny.

There's also a picture of me at the ping-pong ball challenge, and a couple pictures from the baptism. One little problem that we faced was that I had forgotten my belt, and my pants were falling like a blonde person's IQ. So after some consideration, I unlaced my shoe and used the lace to tie together the buttons on the inside of my pants (the ones meant for suspenders). It turned out to work pretty well, so I took a picture.

I'll probably stop by the cyber again later today to send off a picture of the wooden plaques of the temple that we had ordered, so you can see if you like it or not.

PS: Mom, I said I would take money out last week, but will probably happen this today instead.