In which Michael begins to witness a miracle.  I recall teaching a preacher or two on my mission, but never saw this kind of change.

We also got a bunch of pictures from the Crocodile Farm visit.

Wow. This week I've seen a bit about how people can change, for better and for worse.

First of all, some of you may remember how a lot of last week's email was rambling about the preacher that we taught. Well we taught him again, and there's been a 100 percent change. At first he was borderline hostile, pretty much ignoring anything we said, scriptures we referenced, and things like that. This time he was like a lamb to the 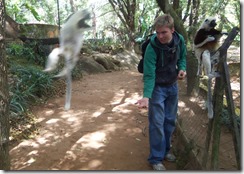 slaughter. Or to the... watering hole? Something like that. He came to us having read in the Joseph Smith pamphlet, the First pamphlet, and the Book of Mormon, and was full of questions. Best of all he was willing to listen and pay attention to the answers that we gave, which was fantastic. He seemed excited to learn, rather than just looking to Bible bash. Which is good for him, because I was about ready to bash his head with the Bible after that last lesson. But he seems to be much more receptive now and asked if we can start meeting twice each week. I don't want to sound overly optimistic, but we were way happy about that. After walking out of there Elder Razafimandimby mention how he's started feeling the Holy Ghost as he reads the scriptures. Interesting.

My overall thoughts about that lesson: it was effective because the student was ready and to listen to and learn from his Sensei. That is me. 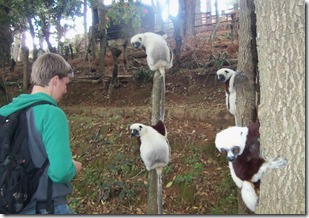 On the far end of the spectrum, we also taught a "less-active" member that has gone about as apostate as you can go. To keep his story short, he joined the church a long time ago, was diligent for about two years until he lost his job but found a new one translating the Bible for the Apocalypsy church. He ended up joining them at some point, and is now a preacher in that church. There's something going on with preachers right now for some reason.

Anyway, we're supposed to seek out the less-active people and help them, so we grabbed a member and lady that is not yet a member, but is way diligent (she has problems getting married) and set off to help this guy that has fallen away. 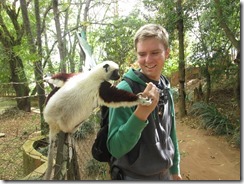 After starting us off with a decently "un-apostate" prayer, he broke into a barrage of questions, talking so fast and asking so many that neither I or my companion could answer them. Mainly his questions were about the book of Revelation (or Apocalypsy, as it's called in Malagasy. Hence the name of the church), which I really don't know about. He said "there are four animals that will be before God's throne; do you know what they are? No you don't, because you guys don't know the truth." Literally not even braking to let us TRY to answer. I would have no idea what to say about that, but it's the thought that counts. Besides, I don't really consider that to be as important as... the Plan of Salvation... repentance... things like that. He also informed us that he does not believe the Plan of Salvation to be from God, 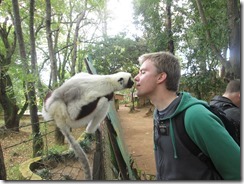 literally FORBADE us from calling Joseph Smith a prophet, and claimed that because we pray on Sunday, our church must be wrong. Well, good sir, the important thing is not the day of the week, but what you do. And in Acts it says that the apostles had the sacrament on the FIRST DAY OF THE WEEK, so you can shut your little apostasy filled face.

This was all Bible bashing with him though, so I showed him Galatians 5:22-23 that says the fruits of the Spirit are peace, happiness, and things like that. I then told him that I feel none of those things when we argue as we had, and we ended the "lesson".

Overall thoughts about that lesson: this guy was far more hostile than the other preacher guy that I talked about last week, and has less than zero desire to come back to the church or even listen to what we say. I don't think we're ever going back there again. 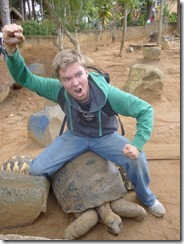 Which just really sucks, because this guy knew better. He was a member of the true church, but now when judgment day comes he'll have to tell God that he turned away from everything that he had been given, for a job.

But enough about that. Let's talk about me. Work and things have been going pretty good here, and seem to be getting better. My companion is starting to drop investigators that are just not progressing, although they've still been taught for at least the last five months. Not a very effective use of missionary time. But with ward members we are seeking out less-actives, and still trying to find a lot of new investigators. It's good.

Life with Elder Razafimandimby is awesome. Partly because he is deathly afraid of the dark, which presents me and the other elders that we live with a delightful opportunity every night after work. But he's a way good sport about it, just laughing it all off. 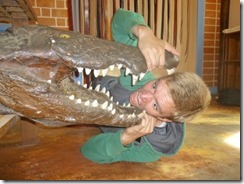 They have a Crocodile Farm reasonably close to where we live, and I just got back from a trip out there. Best. Decision. Ever. The crocodiles were less than exciting, until the Malagasy elders started poking them with sticks through the fence. But they also had lots of other animals and things, including a giant turtle on which I rode into battle. There are very few fences in the park, and fewer guards, so we had plenty of chances to do things like that. Was it smart? Probably not. Did we get caught? No. Worth it? All the way.

They also had a few lemurs jumping around in the trees that apparently love crackers. We lured a few down and had a crazy awesome time with them. These were apparently not as friendly as the ones in actual "lemur" parks, but they were still way fun. Just watching them jump around from tree to tree was cool enough, but they loved eating crackers right out of our hands. 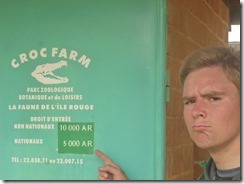 Five dollar entrance fee for the Croc Farm (or two dollars for Malagasies), poke crocodiles, feed lemurs, and get the coolest profile pictures ever. I'll take that any day.

We took tons of pictures, but my camera died, so most of them are on other peoples cameras. And I don't have a card reader right now, so we might have to wait a week for those.

Thank you everyone for writing. I love hearing about your lives and all the important things that you're all up to, as well as votes about puppet names. You only go through this life once, so why not have some fun with it (within the rules that God has given us)?

Thank you all again,