Apparently soccer is the sport of kings.  I guess I’ll wait before telling him that it’s actually football—American football.

He also explains that investigators can be brain dead, but they can also be great!

Subject:  "I was in the hall. I know it because I was there."

Soccer. The sport of kings. We just got back from a game. The field was all dirt and partly flooding with rain water, but hey, Madagascar is awesome. 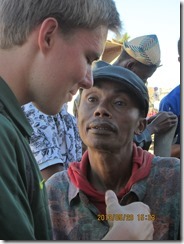 Life has been great here on the mission. And difficult sometimes. Some people are just so dumb! We started teaching this preacher from another church (since that can only end well), and he is honestly one of the most frustrating people I have ever taught. Having started the lesson about the Restoration, we explained the work of a prophet and why it is so important. Because if we have no prophets, then life is looking pretty bleak. Prophets guide us and tell us God's will for the CHURCH as a whole. This guy, a preacher, who studies the Bible in both Malagasy and French, teaches a congregation of people that follow him, said that we do not need prophets. But that's a common thought, so we jumped to Plan 2.

We showed him the verse in Amos 3:7 about God working through prophets and he said he agreed with that. God works through prophets. But, as this preacher explained, that was back THEN. We don't need prophets anymore, because people can receive revelation for themselves now. He claimed that after Christ came the Holy Ghost became a free gift to everybody that falls on them after being baptized in water (he also ignored the authority that is needed for baptism, which was pretty annoying). 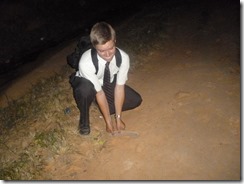 To make a long story short ("too late!") he continued to deny the importance of prophets. That got me started thinking about what the Bible really has to say about prophets, and follow me on this thought: the Bible was never meant to be THE BIBLE. Especially the last books of the New Testament, starting after the Testimony of John. All those letters to the Corinthians, the Galatians, and so on, were words of correction from THE LIVING PROPHETS at that time. Yes the books are "scripture". But they are letters of CORRECTION to a falling people, not books from which to divine the foundation of a religion. In an address about the importance of the Book of Mormon over the Bible, Mark L. McConkie said, in effect, "the books in the Bible are meant to CORRECT the people in Christ's church as it then stood. The Book of Mormon was meant to INSTITUTE that same religion among a people that did not have 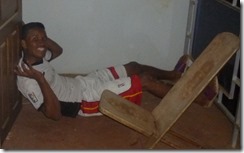 We're going to teach that preacher again later this week, so we'll see where things go with that. It might be a drop talk very soon. 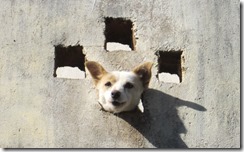 Anyway, things are going pretty well other than that. A few diligent investigators, a few new ones, and a whole lot of less active members. Mom mentioned that less active members should mean we just have to rekindle that fire they had when they were baptized. And hopefully, Elder Razafimandimby and I will be able to do that.

We also have done a lot of tracting, which has yielded (along with investigators) a lot of stories. We found what we call "ny alika rindrina" meaning "the wall dog". He just poked his head through a hole, but it looked really funny. We've also had to cross a lot of rice patties, which means lots of opportunities to fall in some water. Or jump over it. Elder 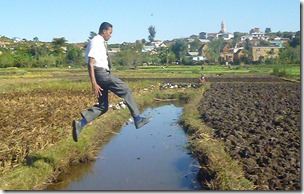 Razafimandimby is kind of a nut, and asked me to take a picture of him jumping gap, probably about seven feet wide.

One of my favorite things was this old lady that we tracted into. She was standing about thirty feet from the gate when we knocked, and we just had a hilarious time trying to communicate. We would ask her something and she response would be about something else entirely. We asked her how she was doing and she said that they had already eaten. So that's... related. In any way whatsoever. Elder Razafimandimby was just cracking up behind the

fence for all of this.

For those of you who have been wondering about "Malagasy and Elder Arrington", it's been improving. My accent is pretty good, but my downfall is that dang vocabulary. I study and study, but things just do not stick in my head. Sometimes I feel like a sponge trying to absorb words, but my brain-sponge is getting squeezed out at the same time; nothing sticks. But I'm getting better, and my Malagasy companion is a great help.

He's also been asking me to help him learn English, so we're both getting better. For those of you who may learn a language in the 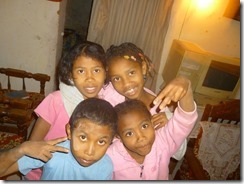 future (Steven), be willing to drop English phrases and replace them with those of native speakers of your language. There are way too many people here that speak English, directly translated into Malagasy. Which is completely un-understandable.

To wrap this up, I just want to thank you all for your support, your love, and your emails. You gotta love hearing from family, especially when they are on the other side of the world. Speaking of which, does anybody actually know exactly how far Madagascar is from the Shack?