Ok, so this Malagasy companion of Michael’s cracks me up.  They play the best missionary games….

Subject:  "So he walked. And sometimes, drove." 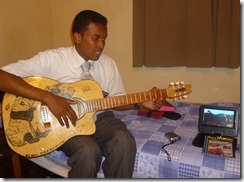 First of all, our last P-day was awesome. Not only did we email and such, head down to Analakely and not have to feel rushed to get back, but I bought some deodorant that smells like chocolate. Add that to the strawberry soap that I use, and I walk out of the house each day smelling like a fondue buffet. Life doesn't get much better than that.

We ended last week's P-day with a party with some members. We had committed to bring some brownies, and did so. The problem: something went very wrong when we cooked them. Maybe there was too much sugar, maybe not enough salt or something. We may never know. The bottom line here is that those brownies hardened like concrete inside the pan. We had to use a screwdriver, five 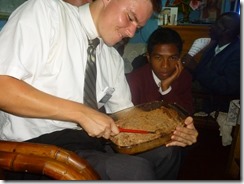 people rotating shifts, and 45 minutes to chisel them out. But it was totally worth it.

I'm afraid my companion and I still aren't teaching quite as much as we would like to, but we're making some progress. Rather than sitting and waiting for the next people to show up, we've started doing a bit of tracting. Which has led us to some fun stories.

For one, we started playing a game. At each house, I'll pick a word for my companion, and he picks one for me. Then I'll have to use the word that he gave me in our door approach, in a way that the person doesn't find it odd. 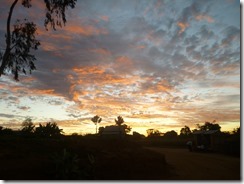 So at this one door, I tell Elder Razafimandimby that he has to use the word "hala", which means spider. We go and start talking to the lady, and she just shuts us down, saying that she never has time to learn, her husband gets home really late (at six o'clock. As if that counts as late.), and she's already way religious, blah blah blah. So my companion turns to her and says "halahelo izahay raha tsy hianatra ianao." Which translates to "we will be sad if you don't learn". Notice the total lack of the word spider, and yet he slid in "hala". Halahelo has no relation to hala, but he says it counts. And we had a pretty good laugh about it.

Also from our tracting, we found this way cool guy. As he ca 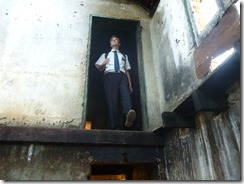 me to answer the door, he greeted us while HOLDING his Bible. As if he had just been reading from it. He lets us in right away, and takes us into his house. Sitting down in his chair, he opens up his Bible and tells us that he's ready to learn, and explains that he had just been studying the book of Job in both Malagasy and French. So we've got a pretty smart, bilingual, diligent studier of the Bible. And as we continue talking he told us that he's actually a preacher for the Protestant church here. But we can work on that.

Anyway, he seemed way cool and we set up another time to meet him. More to come about that. And as a fun side note, he's actually the preacher for another one of the investigators that we teach. Small world. 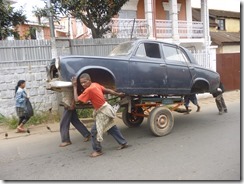 Another fun story. We were walking out to work one day and saw a Malagasy "Flintstones car". As you can see in the picture, they stuck the top of a car to a handcart and are pulling it like the pioneers crossing the paved plains. Even my Malagasy companion thought it was pretty funny.

On the not so funny side of things, we found a way cool investigator. The downside? It takes a 15 minute bus ride and an HOUR walk to get there. Seriously, a straight hour. I've gotten pretty used to walking, but I'm still sore from that. We got to see some way cool scenery, I learned a bit about some Malagasy culture and buildings, and then we kept walking. But it was all totally worth it. We got to a member's house who was going to show us to the investigator (who comes to church every week), and just look at how cool they are. I think I added a picture of their house, which is covered in church pictures. Adam and Eve, Christ in Gethsemane, baptisms, temples, and tons of others. And to top off how awesome they are, pretty much all those 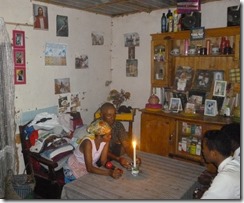 books on the shelf thingy are religious books. Scriptures, Teachings by the Prophets, Preach My Gospel, and all kinds of other stuff. They walk an hour and take a bus just to attend church, and then do it all again to get home. Just way cool members.

Anyway, I know this may not be the most organized email in the world, but enjoy it for now. Apparently next week is Mother's Day, which means I'll be making a sort of phone call. Thing. Talk to dad for the details on that.

Thanks to all of you that managed to squeeze off an email this week. It seems like everyone's lives are just getting busier and busier. But keep up the good work.

PS: if any of you haven't read "I Need Thee Every Hour" by David... Vadimlkghisk... or something like that, I would highly recommend it. You should be able to get it at Deseret Book. It's a fantastic book that talks about how we can apply the Atonement in our everyday lives, through the hard times and the good times. Enjoy!