Yep, a new area, and a new companion.  And some new pictures!

Subject:  "All I ever wanted was an honest week's pay for an honest day's work."

Well, I've officially moved to my second area in Madagascar. Sabotsy Namehana is actually about a half hour bus ride from where we live (in Analamahitsy), so I'll still get to ride lots of busses. Oh goodie. It's been an interesting week, what with all the moving houses, meeting new people, going to another branch (this branch is actually smaller than my old one), and having a Malagasy companion. 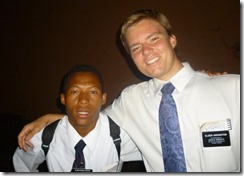 It's awesome having a Malagasy comp. One of the biggest things that I think I've already complained about is how much I don't understand of Malagasy native speakers. What better way to fix that than to stick me with one for a few months? I've already learned a ton from him, and one other huge thing that I'm working on is really SPEAKING like a native. Both in accent and phrases that I use. You can speak English to them that's directly translated to Malagasy, but it makes no sense sometimes. You have to really learn HOW they say things, which I get to do a lot more now. It's way cool. 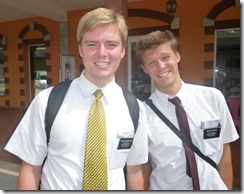 As far as the teaching goes, I actually haven't gotten to teach much. We have to travel a lot between our appointments, and most of them have just be a little spiritual thought so far. I'm sure that once I get to know the people better and their issues, I'll be able to do a little more.

We spent an hour or so teaching a guy how to read. We sat there while he sounded out things that my companion wrote (they didn't want me to write it because apparently white people have "weird handwriting". In America we call that "correct handwriting".) and I was thinking "I can actually read this guy's native language better than he can. That's weird." But then I realized that any word he sees, he already knows. Once he gets the hang of sounding out the words his understanding of what he reads will be WAY higher than mine. How about that. 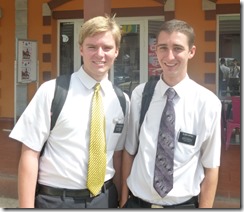 I got a talk by Jon Bytheway that I've been listening to, where he mentions a phrase that he told himself all the time on his mission in the Philippines. "Every person I see is my superior in AT LEAST one way". And think about how true that is. Even though you may speak better than someone, have nicer clothes than someone, or be from America, everyone in the world is better at you than something. So don't try to make comparisons, putting yourself above others. Realize that they are just as good as you, in different ways. The way God made them.

I man not have mentioned this before, but the house that I just moved into has two other elders living in it. One American, and another Malagasy. Interestingly enough, Elder Landon's (the other American, not my trainer) birthday is the day before mine. It may also be worthy to note that Malagasies have a tradition of throwing eggs at people on their birthday. To make a long story short, Elder Landon got egged. Seeing this, I prepared myself for battle. Everything was fine in the morning, when I thought they would get me, but they ended up striking right when we got home. And thus, I had egg in my hair for the first time on my mission. We got some pictures, and it was awesome. 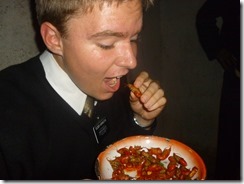 We also got pictures of me at a less active member's house, where they gave us something that they consider to be food. Little crawdads. Or foza orana, as they call them here (it means "rain prostitute". I have NO idea why). It was odd trying to tell myself to eat one, but after the first little bugger got in my mouth I realized that they actually taste like bacon. Really good bacon. I had no trouble scarfing down the rest.

And that's pretty much ben my life for the last week. Way fun.

Thank you all for the birthday wishes, the letters, the package, and the updates. Keep them coming.

PS: Mom, it looks like the only thing missing from the package that you sent was two packs of fruit snacks. But I got everything else, and the shirt is treating my quite nicely. Thanks for everything.