More pictures this week.  In fact the first one is good enough to make it a blog header.  I’ll get on that right away…

Subject:  "Your security ain't worth spit. Everybody's got a gun!" 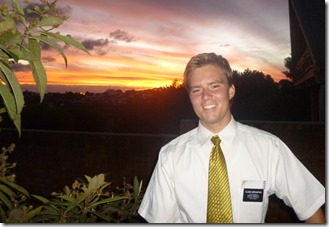 So my epic companion (Elder Eppich) and I are sitting in the cyber right now, and some fantastic child of God decided to start playing "You Raise Me Up" by Josh Groban. So we're enjoying that quite thoroughly.

In other news, our area seems to be taking another spin upwards. As you may recall, after the dramatic exit of Elder Landon, we kind of took a swan dive in total lessons and pretty much all of our stats. Granted, that's not really an accurate judge of success, but it's sad to be spending teaching time just having to wander around and street contact. On the bright side though, we're starting to get some really cool sounding investigators, so that's pretty exciting. Of course, to teach them, we have to stop teaching other people. But as Dad mentioned, we might as well spend our time teaching people that will progress.

s for baptisms, Mario and Santatra, Aina, and Prinsia are all looking ready. The only big problem here is the baptism interviews. Normally we would have them be interviewed on the Sunday before the baptism, but I, in my uncanny ridiculousness, chose the week right after they show general conference. So we missionaries will be at the mission office, while all the investigators and other people are at the church. So we have to figure out some way to make that work out. We have a plan for three of them, but Prinsia lives kind of in the middle of nowhere. But we'll figure it out.

We finally made our goal for investigators coming to church. The goal has been 10 for the last couple weeks, and we kept getting around 4-6. But this last week we finally had not 10, but 11! So we're pretty stoked about that. And two of those people were from a bigger family, and said the rest of the people should come this next week. So that's pretty awesome. I'm just getting the area warmed up again, just in time to drop it in Elder Eppich's capable hands and get transferred. We really don't know if I'm getting transferred this time, but there's a pretty good chance. We'll just have to wait and see. 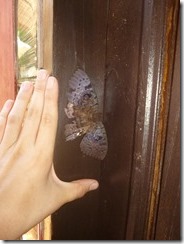 So we have this guy that we teach named Parfait. I don't know if I've already told you guys about him, but he used to be a guardian at this big, empty lot. We started teaching him, he came to church, and his brother (who owns the empty lot) kicked Parfait out. So for coming to church with us, this guy is out of a job. And since the guardians here sometimes live on the land that they guard, he has no place to live either. So he and his wife have just be bouncing around from one place to another, trying to find work and somewhere to sleep for the night. The worst part of all this is when he asked us for help.

No crying or anything, just asking if we could do anything. We called our branch president, who set up an interview for Sunday. Parfait came, they met, and President announced that we are going to help him. Through prayer. Since Parfait isn't a member of the church, President isn't allowed to give him any financial help. So we pray. I wasn't there when Parfait was told that we couldn't give him money, and I haven't talked to him since that, but he seems like a way cool guy. Hopefully he'll progress through these hard times and stay focused on the things that are most important. 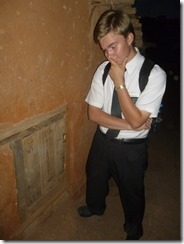 Another random thought, I never thought I would be this good at typing on a French keyboard. I'm now about as good on the French one as I used to be on the English. But now I can't type on the English ones, so I'm not really sure how good that is. It's kind of like my Malagasy. I'm losing English skills, but the Malagasy still hasn't quite kicked its metaphorical behind in gear. I've been told that I speak pretty well, and I understand grammar things pretty well. My biggest weakness is my listening and understanding. David, did you have problems like that? Being good at one thing while the other part couldn't keep up? Any advice? I really want to be good at the language, partly so I can teach well, and partly so I can brag about it. But also so I can teach well.

I finally have some pictures for you, so enjoy what you can. You may see me standing by a door from Alice in Wonderland, far too small to be normal. That's actually a window, but the house was built really weird, so it looks like a door. We also managed to catch one of the little gecko dudes that keeps crawling on our ceilings and walls, thanks to Elder Rasoloniaina's willingness to touch "icky things". After a while I manned up and held it too though. My manness is still intact. Anyway, we took a picture of me almost eating that, because hey, what else are you supposed to do with geckos? 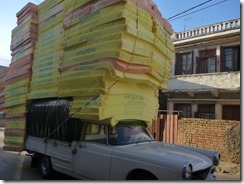 And no, he did not offer to save me 15% or more on car insurance.

They also have these cars that shoot around here loaded up with foam. I've been trying to get a picture for a while, and snapped this sucker while they car sped off to liberate some poor people without styrofoam. Here in Madagascar, we believe that having foam is a right for all people, regardless of their situation or other stuff.

And in the mission office, they have a board with all the birthdays coming up in the month. As you may well be aware, this is the month of April. As some of you are probably aware, my name should be right where my finger is pointing. 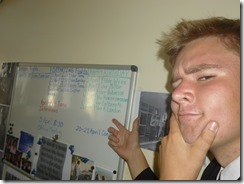 And yet it is not. I guess the mission office people don't like little old Elder Arrington. Actually, we went back in the office today (for a fire drill, which we were not happy about) and they had my name on there. That's nice of them. And I hear that birthday kids get cookies here, so I'm pretty excited for that.

We get some pretty awesome sunsets here, so here's a little snapshot of Mada for you. Trust me though, it's way better in person.

And so are the people. I've talked a couple times about how the people here can be kind of annoying at times, what with all their not understand what we teach them, not knowing how to drive, calling us vazahas, etc. But it's really not that bad. I still have some days where I just want to throw that little Malagasy kid in a rice patty, but generally things are pretty good. One thing I've learned is that if you go talk to the people that call you vazaha, they'll usually stop doing it. I talked to this one lady about that, and told her to call us "friends" instead. And every time we walk past there, she comes out and yells "Manao ahoana namana!" (hello friends!). And hearing that just brightens my day. Good times.

A little spiritual thought for all of you. The gospel. It isn't just a helper for when we make mistakes. True, it improves our lives. But think of how much more it can do for us if we follow it through the good times too. Imagine a straight line, going horizontal. That represents our lives. Sometimes we go above, and sometimes we go below. If we drop below, we know we can turn to the gospel to help us come back up to that line. What many people don't realize is that the gospel will also continue to take us ABOVE that line, if we let it. Just a thought.

Work hard everyone, stay diligent, and always focus on the gospel. Through the good times and the bad.