It looks like Michael has some baptisms coming up, or at least scheduled in the next couple weeks.  One is not the preacher, but the preacher does seem to be making more progress.  Who knows?

I’ve posted more pictures from the Crocodile farm and a few others as well.

Subject:  "You're on the wrong side of the road! Bunch of amateurs." 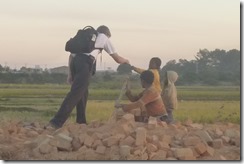 A great week, with lots to catch up on. Yesterday one of our members (the wife of the previous branch president) said the closing prayer at sacrament meeting and ended it by saying "in YOUR name Jesus, amen". So apparently even our long time members think it's okay to pray to Jesus. Elder Razafimandimby and I had a good, awkward laugh about that.

There are five people here with baptism dates on June 22nd. One of them is a daughter of a way diligent lady (Joely) who has a marriage problem. The daughter's name is Laingo. So we go to teach them one day, and end up in a little trivia battle about the Bible. Joely started asking a few questions about where Moses died and things like that, just for fun. So I tried to stump her by asking, "how many prophets will die in Jerusalem before the Second Coming?". Let me emphasize the "how many". Laingo, sure of the answer as a ten year old can be, turns and proudly says "Joseph Smith!" Good job Laingo.

Probably my favorite investigator as of today is Solo, the preacher that we've started teaching. As you all may remember, we had some problems at first with teaching him, but every time we go there he seems to get cooler and cooler. Last Thursday, for instance, Solo told us about an argument that he got in with one of his other preacher friends after revealing that he was learning from the missionaries. 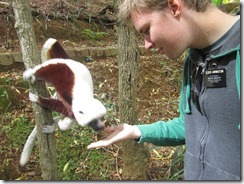 This other preacher guy lectured Solo on how he is a preacher, and shouldn't be learning from missionaries. Solo wouldn't back down, and started defending what we had taught him, especially about the gospel of Jesus Christ. He claimed that everything we say is backed up by scripture, and it all makes sense to him. That was fantastic to hear. One of the biggest things that set of the other preacher is that we believe in a baptism by the Spirit. People think that the Spirit just falls on you after baptism, but the gospel of Jesus Christ (as defined in the scriptures) includes a baptism. Solo didn't really want to argue with his friend, so he backed off. 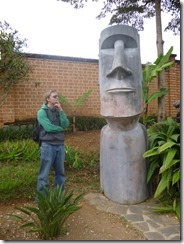 After having all of this explained to us, we went through the Bible with Solo and showed him all kinds of exciting things about the baptism of the Spirit: Acts 1:5 and Acts 8 especially, which separate the baptism of John the Baptist (by water) from the baptism of the Spirit. I especially love Acts 8 which specifically says that the gift of the Holy Ghost comes through the laying on of hands. Booyah. He asked if we can even feel the Holy Ghost before baptism and we explained that we can. Teaching people is so much better when they have an actual DESIRE to learn. You can take 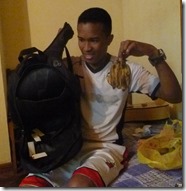 a horse to water, but you can't force people to feel the Spirit. They have to want it.

Of course, not everything has been going so great. To find some of the cool people that we've been finding we have had to drop a lot of old investigators, who were just not progressing. It's sad, but they had lost the drive to learn. For us that has meant a lot less lessons, but better ones. In missionary work, I'll take quality any day. Quantity can come after you have a base of awesome members.

The language and everything are still getting along pretty well. One thing I've noticed about people here is that whether a missionary speaks well or not, they usually understand really well. They just have no idea how to apply what they know. They get comfortable and stop improving. Don't let that happen to any of you. One of the biggest things that helps me is just repeating back exactly what Malagasies say. I've heard it all the time, but nobody speaks the language as well as a native. Whether you un 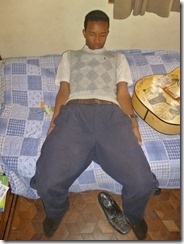 derstand everything or not, just repeat them. It makes you sound WAY better.

I don't imagine too may of you learning a language soon, but I figured I'd just get that out there.

Side note, I added twenty something pictures to the server today, including many from the Croc Farm. One is the sign they have that says non-Malagasies pay twice as much to enter (in French. Which makes no sense to me). I wrestled with a crocodile, rode a turtle, and fed lemurs by hand and by mouth. It was an awesome day. I think I threw in a picture of Elder Razafimandimby sleeping too. We had just come home from church, he ate rice and scrambled eggs (or as he calls it, "food"), and fell asleep right after. Church, eat, sleep. Life is good. Fortunately he wasn't too hard to wake up when we left to work. 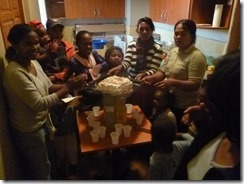 Elder Razafimandimby is an awesome companion. He works hard and has a fantastic sense of humor, even when something terrible happens to him. Like finding bananas in his backpack that he had bought a week ago, having already gone very bad. He knows how to just laugh it off. Elders Landon, Eppich, and Razafimandimby. They are awesome missionaries, and I've loved them all.

Keep up everything you people are up to. Raising kids, making businesses more effective than ever, and walking forty miles. Sounds fun. I want to get something made with the phrase 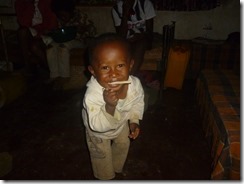 Speaking of which, Elder Landon (the one I live with now, not my trainer) got a wooden plaque made, designed after a picture of a temple. It looks way nice and I'm thinking about getting one made. Mom and Dad, could you send a picture of the Portland, Oregon temple? 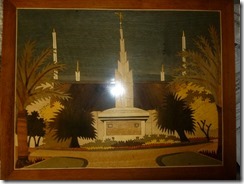 Anyway, that's about all I have for today. Keep being the best family (and friends) a missionary could ask for.