Has Michael been in Sabotsy Namehana for two months already?  Time is flying, even as Michal says.  And then there’s the parable of the toothpaste tube…

Subject:  "Perhaps I'm not as stupid as I am ugly, Commander."

With how time is flying now, you'd think somebody had thrown a clock. Ha. Get it? 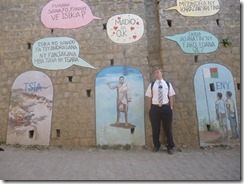 Two more fantastic lessons with Solo (Captain Awesome that is also a preacher) have led to some good news and some bad news. Bad news: his wife. He's been avoiding having us over while she is there because she's way die-hard in her church and would probably throw us into a furnace. We'll have to meet her at some point, so I'll let you all know the details about that when it happens.

The good news however is that Solo has been asking for a Triple. He heard about this "big Book of Mormon" that some library had and asked how much it would cost: 40,000 Ariary, if I remember right. So about 20 dollars. I think we just about stopped the poor guy's heart when we told him we could get him one for 1,100 Ariary (55 cents). He basically threw the money at us and asked how soon we could get it to him. 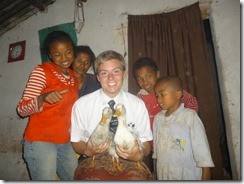 Dad mentioned in his email that he had also taught a couple preachers during his mission that just didn't seem to get it. I was wondering about what makes Solo different, and all I can really think of is that he was willing to try. Anybody that has gone on a mission has had investigators that just don't read from the Book of Mormon, yet that is exactly what Solo had been willing to do. Before he read from it, he was borderline hostile. After maybe a week of owning the book and reading from it his entire view has changed. Rather than arguing, he's asking questions and really trying to learn. My companion and I walked out of one of our lessons and one of us said that we might as well just leave Solo, since he's pretty much teaching himself now. He had just studied the Plan of Salvation and knew it better than most of our members. 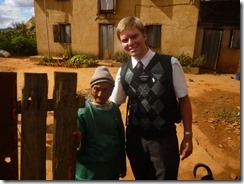 So what makes a golden investigator? Willingness to try. Even if Solo doesn't know the church or the Book of Mormon is true yet, he is willing to test it to find out. His mind is open, and God is going to take care of the rest.

Last night I had a little apostrophe ("I think you mean an epiphany") about how God pushes us. Follow me on this. It's like each of us is a tube of toothpaste, with God squeezing us out onto this massive toothbrush of life. The biggest thing that I really got from that is that God is going to push us until HE thinks we're through, not until we stop giving. 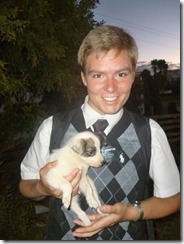 Sometimes we'll have a little bubble, so God pushes a little harder until toothpaste comes out instead of just air. And even when it seems like we're at the end and can't do anymore, God keeps squeezing, because He knows that there is that little glob in there, and He's going to get it, no matter how hard He has to push.

Basically God pushes us to literally give everything that we have; nothing more, nothing less. Getting squished like that might not be comfortable, but it's what we need. Instead of trying to hold back, just devote yourself to Him, and let the guy who knows EVERYTHING take the wheel.

For those of you who are wondering, yes, I just finished a toothpaste tube last night, after getting everything I could out of it. 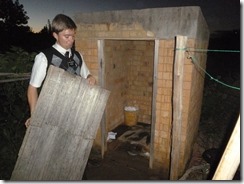 From today, we have five baptisms this Saturday (all children investigators from before I came here) and then transfer news on Sunday, and there is a good chance I'll be losing Elder Razafimandimby. Which is sad because he is awesome. As for the baptisms, they are all really smart and everything, but I would rather hunt down twenty people like Solo than dunk a hundred 10 year olds. Everybody in the mission knows that older people are the foundation of a solid church here in Madagascar and those who are now children can join the church later in life, when it is more stable. Unfortunately, baptizing kids is a lot easier for some missionaries. Hence, Elder Razafimandimby and I are tracting and finding families that will hopefully be diligent. 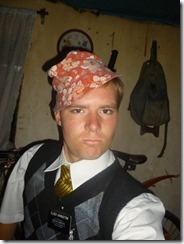 And there's always the less-active members that we have to hunt down. They range anywhere from strictly lazy (and thus not coming to church) to 100 percent apostate, like the guy from a couple weeks ago. Again, they just lost the desire to improve and know that the church is true. Those of you who are reading this, obey my advice: DON'T GO INACTIVE. It's just not worth it. You might as well just be a tube of toothpaste, completely full and ready to be awesome, but holding back as hard as you can. As the scriptures say "God will have a humble people". You can either give in now, or God is going to start squeezing hard. Whether in this life or the next, you WILL be humbled. So you can regret your life when you look back on it, or proudly tell God that you were there when he needed you, ready to give the very last of your paste. 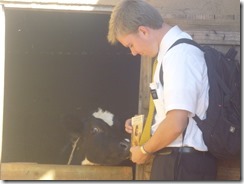 Thanks to all of you who have been writing and letting me know about life back in the mainland. It sounds like Lindsay's business is doing even better than her competition. Might I add in that sabotage is always an effective weapon, if you're just trying to beat the other guy. But seriously, good job. And thanks for the email Lindsay. Have fun on your campouts.

Grandma and Grandpa Arrington, thank you for your email too. I guess you never know what happens to people when you leave them, but they say that no effort in missionary work is wasted. You'll be blessed for your work.

As for the rest of you, keep up the good work. Business things, baseball games, school, and high adventures. It doesn't get any better than that. Make the best of it, and stay focused on the important things in life (the gospel).