And now, things change.  More baptisms, but transfer time has finally come!  Oh, not for Michael, but this week he gets a new companion!  And he’s got great investigators!  And more baptisms!

Subject:  "This tattoo will protect me from harm!"

Transfers and baptisms! I know what it's like just reading these things at home and just thinking "that's nice", but we have been crazy busy. And I think it's messing up my brain. First off, I was telling someone about the Book of Mormon, trying to explain that it's just a different book than the Bible, about people in a different place (people have a really hard time understanding that it's not just a different translation of the Bible). So I grabbed the first two things I could find to illustrate: two glass bowls that were sitting on the table. I explained that one represents Jerusalem (where the Bible took place) and the other represents the Book of Mormon, which is the story of "the people in Madagascar". Whoops. I corrected that pretty quick while Elder Landon laughed. And then I realized that the glass bowls that I was using as "salt and pepper shakers" for the scriptures were actually ashtrays. Is it sacrilegious to use ashtrays and stand-ins for the scriptures? 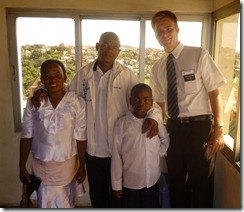 Second, later that day we were walking home and I decided that I wanted to buy some potatoes and make some fries later that night. A good idea right? So we stop by the tsena (imagine a farmer's market kind of thing), I find some potatoes, walk up to the person selling the potatoes, point at the potatoes, and ask "how much for these eggs?" So that was pretty awkward. But funny.So I just switched computers with Elder Rasoloniainam because this one only seems to have an English keyboard on it, and he only knows the French one. Which leaves me trying to figure out the English one again. This is really hard.

In other news, we had another baptism! Monja, Tinahy, and Sambalihy are now the newest members of the Ambohimanarina Branch. And they're super cool. Tinahy told us that she had been super nervous that she would forget everything right before the baptism interview (and rightfully so. She's not exactly the sharpest tool in the shed, but she believes the church is true), so she prayed for help remembering. And Elder Randall, who interviewed her, said she did great. We were pretty happy about that. She needed help, and turned to God. Way to be kid. Samba was super funny to watch get baptized. After Elder Landon finished the prayer, Samba DOVE back into the water. Just a super excited little kid. 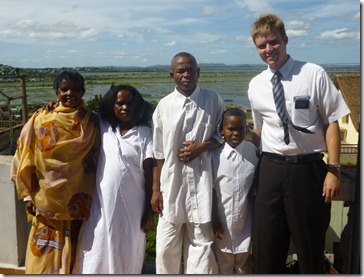 We have also started teaching this super cool couple named Mario and Santatra. We taught them once, and gave them a First pamphlet for them to read. When we came back, they pulled out the pamphlet, which had been marked up like crazy, and asked about the Melchizedek Priesthood. They told us that they understood the general idea of priesthood and the Aaronic, but they weren't sure why there was a higher priesthood. Fantastic question. We explained it, and they got it. Even cooler, when we started talking about the Restoration, Elder Landon asked Santatra what she remembered about it. And she told him the story of Joseph Smith, EXACTLY as it happened. In 1820, there were a bunch of churches. Joseph Smith wanted to find the truth, so he read in the Bible and learned that he should pray. He prayed, and God AND Jesus Christ appeared to him and told him that none of the churches were true, and because of the Apostasy the truth was lost. But Joseph Smith was called to be a new prophet, to restore the true church and God's authority, the priesthood, back to the earth. She had it all. In Elder Landon's words, it takes some people YEARS to understand that. She (and her husband) got it in a week, because they actually READ the dang pamphlet. After that, we invited them to come to church. Just a nice thought, maybe they'll come eventually. Saturday night they called us to ask what time church starts. Which nobody does. On Sunday, we were standing outside the church, greeting people, and I turned to Elder Landon and said "wouldn't it be weird if Mario and Santatra actually came today?" and right when we laughed about that, who do you think walked up the stairs to our church and said hello to us? The coolest investigators ever. Mario and Santatra. They said that Mario's parents are members, and now these two want to investigate the church because they've seen the blessings that the parents have gotten. And, most importantly, they are willing to put in the work to receive those same blessings. Get ready to hear about them getting baptized. Another couple we started teaching a while ago is starting to look super cool too. They are the ones that thought all the churches are true. But recently, they seem to have been changing. They're far more open to what we teach, and they've started reading the Book of Mormon. Interesting connection. Even more interesting, they passed the First pamphlet that we had given them off to their neighbor, who also wants to learn, and has been sitting in on the lessons. And now that lady has passed the pamphlet off to another neighbor, who also wants to learn. I don't know if it's the people or the pamphlet that's working this magic, but it's fantastic. These people have really been prepared by God.

Sadly, it appears that this little group of neighbors is doing more missionary work than our members, but hey, we're not complaining.

Another rather interesting note, Elder Landon is officially getting transferred. Goodbye to my trainer. When we got the transfer news, I learned that my new companion's name is Elder Eppich. It sounds like we could have a pretty "epic" time. Haha. Humorous.

Generally things are looking way up back here. We still have plenty of disappointments, particularly with investigators, but as Harvey Dent said it, "the night is darkest just before the dawn. But I promise, the dawn is coming". And so it is. Thanks Harvey. I believe in Harvey Dent. 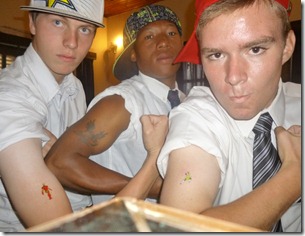 And it sounds like things are going great with all of you. Moving houses, having babies, Dad getting into this work at the Hillsboro Arts and Cultural thing, and Adam being back from his mission. Someone give that kid a high five from me.

Same thing goes for Steven. I salute you on your choice of wearing jeans. The pants of kings.

Everyone keep up the good work, don't forget your missionary out here in the field, and keep doing God's work. The church is true.

PS: This weeks pictures include baptism shots of Monja, Tinahy, and Samba, and the other girl in there is named Sr. Tsabao Marie. We call her Jambon Marie. There's also a picture of me with Elders Rasoloniaina and Randall. Elder Rasoloniaina has a real tattoo, and you can get these press-on tattoos from a certain kind of gum here. I have Mulan. And there's a picture of Fr. Remy's family. They're all members, and super cool people. We like them. Enjoy!