What a week. Rain, rain, and a good deal of rain.

I don't know if I've already mentioned this, but it rained here. For the last four days we've been having some pretty awesome floods. Fortunately we have rain jackets (thank you Mom) though we usually try to hide under some shelter if we can and wait it out. That's one of the really weird things about the rain here. It rains like four inches of water in half an hour. Just pouring like crazy. But it's pretty fun. You can always dry off when you get home.

The work here... what to say. We've finally gotten a some baptisms, and just yesterday another family, passed their interviews, so they are officially ready for this Saturday. Congratulations to Monja, Tinahy, and Sambalihy! So on the baptism and success front, we're doing pretty well. It seems that there is a lot of opposition though. Just as things are looking up, with baptisms and diligent recent converts and investigators, the negatives are flying off the charts. One family that we had taught a couple of times, who seemed really interested, slammed the door on us the other day, saying that they didn't want to learn any more. Out of NOWHERE. That got us pretty sad. Add to that all the time we have to waste just wandering around and searching for something to do, and you've got a couple of fairly unhappy missionaries. Especially when your back-up plan for your back-up plan fall through.

But by far, the most frustrating thing that we've done out here is teaching this one new family that we just found. We've taught them twice, and this last time they told us that they believe all religions are true. ALL OF THEM. I don't want to sound negative, but that is just a retarded idea. In the Bible, Christ says that there is ONE Lord, ONE faith, and ONE baptism. (Ephesians) How many? ONE. But they explained that that just means that any religion is okay, and you can't go wrong. As long as you want to follow God, any religion will get the job done. So Elder Landon brought out an example for them. The Apocolipsy church said that the world would end in 2012. And yet we're still alive. So is their church true? The investigators answered no, but people just need to receive a personal answer about whether or not something is true, and that answer comes through God. Which is true. So I asked them if they believe God has a body, to which they said they do. So, if they received that answer from God, than any church that teaches otherwise (i.e. God does NOT have a body) must be false. They just sat there and tried to figure out what that means. Well, it means that NOT ALL churches are true. We ended the lesson after that, giving them a pamphlet on the Restoration to read as homework. Hopefully they'll read and pray about it. It seemed that they were starting to understand our point, and right now we're just trying to figure out how to continue to teach them with patience. We have to take it slowly and just help them see the truth. "That's what we do. Save souls." - Madagascar Missionaries Inc. 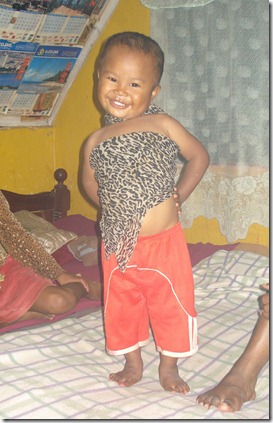 But generally, I think things are looking up. We have some recent converts and people to be baptized soon, and it they're all solid in the faith. There should be none going inactive. We've been working hard, and it's paying off.

Side note, we were teaching the family that was baptized last week, and there was this little kid there. And he randomly ripped his shirt off. And continued by wrapping himself up in some toga looking thing, and decided he's a superstar. Elder Landon got a picture of him, which you should be able to see here.

As for the family, it sounds like everyone is doing well, based on the reports I got from Mom and Dad. Although a good deal of you got pretty sick from the sound of it, which is never fun.

Lindsay, I imagine moving houses wasn't fun. It never is. Moving around heavy boxes and things. Not to mention you got that baby in your stomach which is like a permanent box that you never get to put down. An extra weight. But it should all be worth it in the end.

Steven, good choice on skipping baseball. Obviously playing it would have been awesome, but people seem to lose sight of the importance of choosing good friends. Elder Randall has just been telling us about a member they had just baptized in their ward, who has started drinking again. Why? That's what her friends did, so she just joined them. Always choose your friends wisely. But also try to find some way to keep playing baseball. America's pastime. *Salute*

Also, everyone, if you have not read the November general conference version of the Ensign (or Liahona), READ IT. I just got if from the mission office, and it is AWESOME. Crazy good stuff in there. I had never been one for reading magazines, but it's fantastic.

Generally, keep up the good work everyone!