Great email again this week.  And some fun pictures!

So apparently there is a mall that just got built near us, and we're going to meet up with some other elders and check it out. Should be fun. Mada-mall. What will they think of next. The work here this last week has been going quick good. Quite good indeed. You all may remember that we have a baptism coming up this Saturday, and just yesterday, everybody passed their interviews for it. In weather man/airplane pilot terms, it's looking like clear skies ahead. Hery is doing awesome, and Noel and Lily and their kids, Tsiry and Lova, are all great, know the gospel, and are just plain ready.

A couple fun stories happened becuase of the interviews, mainly because we had to go on splits to get them done. I ended up going to a different ward with Elder Rasoloniaina, while Elders Landon and Randall went to my branch to do the interviews. However, since nobody had told the ward that I was attending about the splits, they thought I was Elder Rasoloniaina's new companion. So I'm sitting there in Sacrament meeting, and the testimonies are about to start, when the bishop stands up and says "and now we're going to hear a testimony from the new missionary". Wait, what? So I got up there and rocked that podium like a star. Good times. 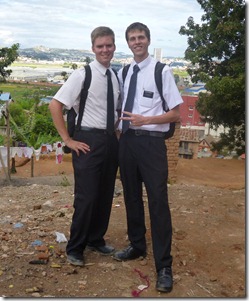 After church, since Elder Randall, as the district leader here, has to go on splits with everyone anyway, Elder Randall and I teamed up to take on Ambohimanarina. Which was awesome, but kind of rough. For one, he decided that he just wanted to listen to me teach, so he only helped teach in one of the lessons. But it was really rough just listening to him speaking Malagasy. He has a hard time with the language, but insists that he doesn't need to work on it because he is, in his own words, "good enough". No offense kid, but I've been here 10 months less than you, and I'm probably better at the language. I don't want to sound all prideful or anything, but it's true. But I avoided correcting him at all today, and took his advice with the grace of a gazelle frolicking through a meadow on a clear and sunny day. Frolicking.

Rain. It's rained here pretty hard for the last couple of days, and through some of the nights. I bring this up  because I woke up a couple nights ago to find it raining on my head. Apparently the rain had squeezed through the rough and decided to leak, right on my bed. So, being a tired, Madagascar missionary, I moved my bed and went back to sleep. I could fix it in the morning. I still haven't fixed it. But it stopped leaking, so I'll count the problem as solved anyway. 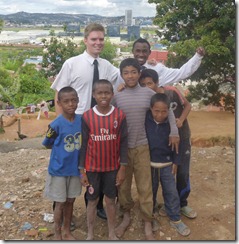 And that's pretty much a week in Madagascar. I loved getting all of your emails today. Mom, you asked about the Plan of Salvation. Try reading around Alma 32-34. I think that's the area. There's a lot of good stuff in there. And of course Preach My Gospel. It's kind of ridiculous how helpful that book is. I would recommend using it when you teach, and challenging your... people that you teach to read it as well. I've found that when I follow Preach My Gospel when I teach, people seem to understand it better, not to mention it structures the lesson. I also just read a talk today by Robert D. Hales from General Conference in 2010, I think from October, where he talks about the importance of our agency. That might be another small help.

Thank you all of those that have offered explanations for "whitely-clad guy" in Lehi's dream. I suppose anything other than reading from the dream itself is just speculation, but it was interesting to here some of your ideas. Especially Dad's. He talked about how the Man in White could be just anyone who works to help others find their way to the Tree of Life. In essence, any diligent member. An interesting thought. 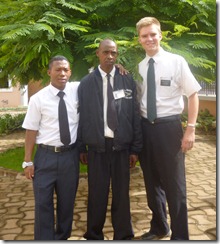 Picture update: since I went on splits, I decided to get a picture with Elder Randall. He's the really tall guy. Also, I figured a picture with Leonce couldn't hurt, so we gathered up a bunch of random kids that happened to be near there and snapped a snap shot. And the church in Ambohibao has a guard (the church I attended, not my usual place), so I got a picture with him. He's pretty cool. Notice his jacket says something about the Marines. That should help illustrate how awesome Madagascar is.

And that pretty much wraps up this week. I'll try to be a little more organized next week, and to keep the pictures coming. Everyone, know that we are working hard out here as missionaries, and I hope you all are doing the same. There's a quote I read a few days ago that goes something like "after all that has been said, the most important thing for us to do is missionary work." I think that's in Preach My Gospel somewhere. Suffice it to say, missionary work is really important.

Thank you all for your support,