Wow, week 16 in the same place and still going strong!  And good thing, too.  This was baptism week.  Quite a few, actually.  What a great experience for Michael!  And look at the pictures—he’s clearly the tall one in town.

Subject:  “If I stare at the lock really hard, it will burst into flame and melt.”

Baptism. Booyah. So we officially have five new members of the Ambohimanarina Branch. Noel and Lily, their kids Tsiry and Lova, and the ever awesome Hery. 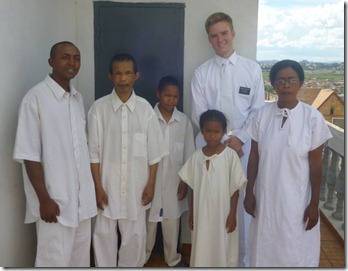 A few details for y'all: First off, the "font" broke again before the meeting even started,  so we had to plug up a hole in the bottom  with a rag that somebody had found, which meant one of the people there had to strip down and plug it. Which worked out just fine.

Second, there was some kind of party going on on the roof across the street so there's these songs blasting at us while we're trying to baptize people and give them an awesome spiritual experience. So much for that. But they all still enjoyed it.

Third, apparently the two kids asked that I baptize them, so Tsiry and Lova are officially my first baptizees. Awkwardly enough, I didn't quite get Tsiry under the water on the first attempt, so the second time I just shoved him down. Hard. But it got the job done. 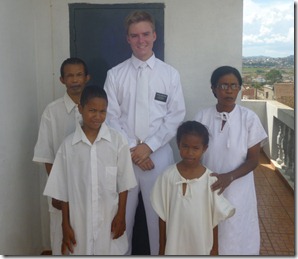 And fourth, after Elder Landon baptized Noel (the old guy), Noel jumped out of the water and said "Amen!" It was pretty funny.

All in all, the baptism was good, although it could have been held a little more sacred to the members. But it got done.

And yesterday, Hery, who just got baptized, referred us to his mom as a person that we could start teaching. The first referral we've been given in probably a week. We started teaching her, who is a pretty solid Catholic, and six other women joined, ready to learn. So we'll see where that goes. 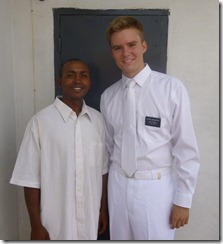 Generally the work here has been improving. I don't want to jinx it or anything, but we have some really cool investigators and we're working hard to help them progress. Most amazingly, they are working too.

Other than that, this week has been pretty uneventful. Just teaching and preaching. And working and sweating. A lot. So it's all good. We had a zone meeting this last week, where the zone leader pulled out the progress records that everyone in the zone had made, and laughed at them. People just leaving spaces blank, writing information that doesn't help, and stuff like that. Then he pulled out one and said, "this one was actually really good". Who made that one? Oh yes. Elder Landon and I. I had pretty much just assumed that everybody filled out records completely, but apparently that's a real problem here. So I'm really glad my trainer has been teaching me well.

Including the language. I've been getting a couple messages from those among you who think that my Malagasy must be getting better, since my English is getting worse. I, in my righteous indignation, went back to see if my English really is suffering. And it is. Big time. And it's the same thing in my journal too. So that's pretty sad. On the bright side though, my Malagasy IS getting better, so I'm pretty happy about that. It's a fair trade-off. 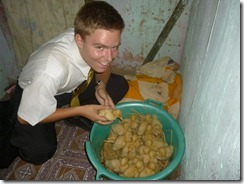 Unfortunately, that's pretty much all I can think of to write right now. We've basically just been working a lot, studying hard, and seeing some progress. It's interesting how much WORK is involved in this missionary WORK. Who'd of thought it?

For pictures this week, we of course have all the baptism pictures you could ask for, as well as me holding a couple of baby ducks. One of the less active members that we teach (who is actually starting to become active again) had a bunch of ducks just sitting in some bucket in her house. Which was pretty cool.

It sounds like everyone is still doing pretty well back at home. Steven is going to battle against the sons of unrighteousness, all the sisters are preparing for/raising their new 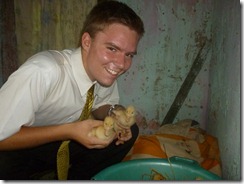 babies, and dad is fixing the washing machine. Good man.

David, let it be known that I say this: Happy Birthday! I admit I didn't get you anything, but it's the thought that counts, right?

Everyone, just keep working and studying them scriptures. There's some REALLY awesome stuff in there, if you put in the effort to find it. That seems to be a really common theme in the gospel. You have to put in the effort, and THEN you'll get the blessings for it. Effort = blessings. Hence people like the pioneers having so many miracles (at least 17 miracles, if I recall correctly. Good movie).

Thank you all for your support!