Opinions on the Lehi’s Dream question below are welcome.  We’ll see what kind of information we get!

Subject:  “Some king of the rock.”

So... first off. In Lehi's dream, Lehi just chills in darkness for a while, and sees a guy dressed up in white. Does anybody know who the whitely-clad guy is? There's cross references to Joseph Smith-History (Moroni appearing to Joseph Smith) and a vision that Daniel has when he sees the Lord. Not really a big doctrinal "need to know" kind of thing, but it would be good to know. An investigator asked that yesterday, and it kind of caught us off guard.

Anyway, it's been a pretty good week. Elder Landon and I are getting along a bit better, and things have been going smoothly. Of course we still have people not coming to church or following up on their commitments, but hey, they're getting closer.

There's one guy in particular that seems rather promising, named Indrina. He sells sandals on a path that we walk by all the time, and we finally worked up the guts to talk to him. And he accepted to meet back with us later. We've taught him twice so far, and we learned that he chews tobacco and drinks, plus who knows what else. But he has a really sincere desire to improve himself and his life. He says he keeps trying to quit chewing tobacco, but never makes it very long. So we're going to strengthen him with the message of the restored gospel. Booyah.

Another kind of funny person Elder Landon and I tracted into is named Daniela. He started off by telling us that he used to be FJKM (Malagasy Protestants) but after studying the Bible, he decided that the FJKM is wrong. And I'm sitting there like, oh boy, do we have a story for you. You see, in 1820 there was a young boy named Joseph Smith... and then Daniela kicks back in by saying he already found the truth. Apparently some guy here in Madagascar that's telling people that he had some vision and Jesus gave him the authority to restore and lead the church. He's now the "prophet" of this random church. Weird. It could be very interesting teaching Daniela.

I'm not really sure what else to talk about... all the people with baptism dates are going pretty well... other lessons have been going pretty well... here's something. Elder Rasoloniaina has been really quiet and kind of a jerk for the last while, so we had a house inventory. To skip over too many details, things are better now. We figured out that the problem was us. Kind of. Since Elder Rasoloniaina doesn't speak English, every time that we speak English (pretty much all the time) he thinks we're gossiping about him. So we've started speaking more Malagasy around the house, and trying to involve him more. It's worked out pretty well. So that's good. Also, I don't know if I mentioned this before, but they play a lot of dominoes here in Madagascar, and I've been learning from the best. It's one of those games that is super simple, but you can also strategize, so it's not all luck. And Malagasies are REALLY good at it. It's ridiculous. 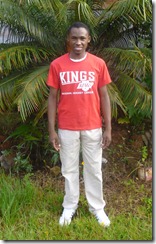 Speaking of ridiculous, I can't seem to find a reason to take pictures any more. Just more fantastic views of rice patties, teaching the same old people, and... pretty much nothing else. I keep trying to do something exciting to photograph, but... nothing. I'll try harder next week. But, here's a picture of Leonce near our house. This kid helps us out all the time, and apparently wanted a picture. So we took that one and he printed it off. You may also notice, in the next picture, my companion playing with a Barbie. We got bored waiting in someone's house for them to show up, so... there you go.

I've been trying really hard to think of something significant to write about, but I can't really think of anything. Time is flying by here. I can't believe I've been on the mission for FIVE MONTHS. It's crazy. Doesn't feel like it at all. 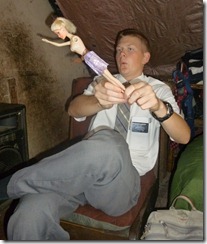 It sounds like everyone back home is staying busy though. Dad and David at this business thing, Steven doing science things and eating pizza, and Mom travelling all over the place. Mom, I got a kick out of when you said, "I feel very disconnected from things at home when I am gone." I was just sitting here like, yeah... tell me about it.

Siblings of mine, from the shortest Emily to the tallest David, from the abs of Steven to the... brothers-in-law...: stay busy. I don't mean you should do stuff just to do stuff, but always focus on useful work. An idle mind is the devil's workshop, while Christ chose his apostles while they were working. Interesting pattern. Focus on the gospel, stay busy, and watch the blessings rain down.

And I now bid thee all adieu, until we meet again. Or next week's email.