Just how many is a bagillion stairs?

Subject:  "Some of you may die, but that is a sacrifice I am willing to make."

I'm never really sure what to say in these emails, so we'll see how this works.

First off, it was a rather... interesting week. Painful in some ways, successful in others. On the upside, we were still able to teach a bunch of people. Not as many as we normally do, but we did pretty well, all things considered. Sunday was especially rough.

First off, we went to church. We have a goal to get 15 investigators to attend, and with how many people we teach, that should be pretty easy. Yesterday, there were 6 people there. Six. We were pretty sad about that. Just come to church and your whole life will get better! It will just take some more work. But the REALLY depressing part didn't come until after church.

We headed out to teach, and got a call from the first guy we were planning to teach, saying that he couldn't learn today (yesterday). One down. But no problem, we still found some people to teach. We showed up to our next lesson (after walking down a bagillion stairs, mind you) only to find that they were not at home. Okay, so we went to our next lesson (back up the stairs). They were there, and we found out that the reason THEY didn't attend church today was that they have no lock on their door, and they can't leave the house, just in case there are thieves roaming about and causing havoc. Understandable. Next up was back down a million stairs (on the other side of the hill). They were gone too, so we went back up those stairs, and back down the other side, only to find that the second person we had wanted to teach today still wasn't there. After waiting for them for a little bit, we headed back out, going up again, and back down the other side again. The people were finally there, and we shared a little thought with them, then headed back up the Stairs of the Thousand Burning Quads. And since the parents for our last scheduled lesson of the day weren't there, we got to teach their kids. That whole family is preparing for baptism on February 9th, but the wife keeps not being able to attend church (Lily, if you remember her story). Anyway, the parents were gone, but we got to explain a bit about repentance with the kids, just to make sure they were ready to. They were sharp as a tack. Or an open safety pin. 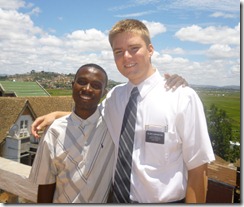 All in all, we had to climb up and down a whole bunch of stairs, making me feel rather like Po on his way to see who the Dragon Warrior will be, but we still ended up teaching six lessons. We had a couple other days that were pretty rough too this last week, but somehow we still manage to find something to do.

There is a man named Boto that we had been teaching for a while, but he had to go to Mahajunga a while ago for some work. He was awesome, learned really well, and is just a great guy. Understood the doctrine, actually asked questions if he was unclear on something, recognized when he had received an answer to prayer, and things like that. Just an awesome guy. He had said he would be gone for three weeks, but he's been caught up in a lot of work and things have come up, so he hasn't been able to return yet. Elder Landon (who is now pretty definitely leaving in the next transfer, since he's already been here for five and a half months) was getting really anxious that he might not be able to see Boto's baptism before he gets sent to his next area. Boto has officially promised that the latest he'll be back is the beginning of February, which would put him able to be interviewed and baptized right AFTER Elder Landon leaves to his next 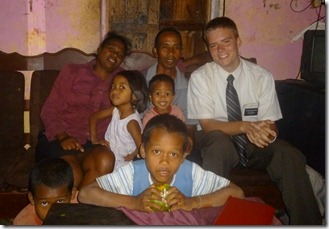 area. BUT there came some news about transfers. They'll be postponed until the next group of Elders comes in from the MTC, at the end of February. Meaning that Elder Landon will most likely get to see the baptism. Which he's pretty stoked about.

It also means that he will have been in this area for 7 months. Which is a long time. And it means that he will have been with me for four months, and in his own words, four months is a long time to be with one companion. True that. Suffice it to say, we've had some interesting conversations, just trying to sort out our differences and such. It's taken some work, but we're making progress. Very slowly.

I know this is probably not the best email ever, and I'll try to do better next time. Same with pictures. I found an email in my "Drafts" box that I apparently hadn't sent before, so I got that off. The extremely black guy standing next to me is Boto. I forgot what the other pictures were, but they should be pretty good. And now here's one with Sr Tsabon Marie (or as we call her, Jambon Marie). She's super diligent, and helps us out all the time. Super cool.

That's pretty much all for now, so everyone keep up the good work.

Thank you all,
- Elder Arrington