Ah, the life of a country-club missionary!  Nothing like a round of golf, with a caddy, no less, after a hard week of teaching.  And can you get teaching hours on a golf course?

Good letter this week—longer than most!

Subject:  Fly away Stanley, be free!”

I have to admit, I keep having this thought that I could shoot out a quick email to you all and try to just get some questions to write about. But then I remember that you won't be up for like 7 hours. Sad. 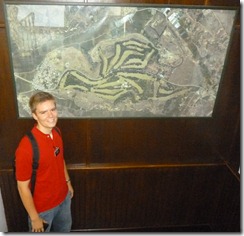 On a much brighter note, our area is starting to look a lot better. Lily, if you remember her, came to church today. It turns out she had pretty much just told her boss that on Sunday, Lily be goin' to church. Which is awesome. She and her family are looking pretty ready for their baptism on Feb 9th. The only real problem here appears to be their sense of humor. When we taught Lily last (yesterday) she pulled out a pair of broken glasses. We asked her how they were broken, and she told us that one of her kids (a daughter named Lova, also planned to be baptized on the 9th) had snapped them on accident. So I start going into the lesson that we prepared, on repentance, and throw in that it's a perfect lesson for Lova, since she broke the glasses. Haha, right? Wrong. Awkward silence. It was pretty weird. Elder Landon told me afterward that he wanted to burst out laughing, but couldn't. Politeness. But Karma came back to bite him in the face when he tried to say that we need to repent always, and it came out as, "we have to sin always" instead. Mwaha.

Boto, also scheduled to be baptized on the 9th, has been in Mahajunga for what feels like a millenium. Elder Landon has been trying to call him to find out when he'll be back, and when the phone finally worked he turned to me and said I'm going to talk to him. Which I've never done before. And along with the whole "language" thing going on there, the phones here suck. But after a while, I found out that Boto was coming back on the 30th. Of February. And I repeated it back to him like 55 times just to be sure. Elder Landon heard and, almost crying, took the phone to clarify. Apparently Boto is coming back on the 30th of JANUARY. Which is awesome, but it made me feel pretty dumb. No worries though. Boto is awesome, and we're really looking forward to his baptism. 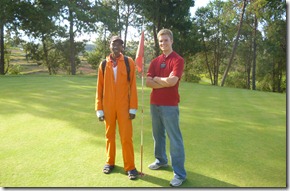 Next up is Hery. The final person to be baptized on the 9th. He's been having some trouble remembering the doctrine and things, but we're reviewing everything with him and he gets it way better now. He's already stopped smoking, and is starting to look way ready. Awesome stuff.

We've also been having a lot of trouble here with our teaching. Just... we really don't know what to do. This last week we just dropped a couple of days and went out tracting, hoping to find a couple new investigators. Which worked fantastically, and the people that we've found are super cool. Way interested, asking questions, and excited to learn. Not common traits around these here parts. Also, this one guy we went up and talked to while he was just smoking on the street, and after a while we asked his named. He gave it as the Malagasy Mr. Bean. Looking closer, you could totally see it. It turns out that he's been in a few Mr. Bean type movies here in Madagascar. So that was pretty cool. All in all, we hadn't had many new investigators recently, but now we know why. Things are looking much better.

Except for some of my language abilities. There are two meanings for the word "mandika" in Malagasy. One is to break, like a commandment or a law, and the other is to translate words. It's pretty much decided by the following word. Context clues. Anyway, we were sitting there teaching about Adam and Eve, and I told the investigators that while it's true that Adam and Eve "translated words" when they ate the fruit, blah blah blah. And I could not get it straight for the rest of the time. It was rough. But pretty funny.

We found out that there is a golf course around here, and last week, we totally went out golfing. LOADS of fun. For one, we each got a caddy. Always a plus. For two, those caddies were pretty dang good. My guy kept correcting my swing, always knew just what was wrong with it, and on the last whole we had them play with us. I don't want to be too specific about how badly they beat us, but suffice it to say the got about half of our score on that hole. We only got to play 14 holes total because Elder Randall was feeling really sick, but it was way fun. And I won, so haha suckers, I was the luckiest one today. Way fun. Less than 40 dollars for balls, clubs to rent, a caddy, and fond memories of golfing in Madagascar. Totally worth it. And we're thinking about doing it again sometime. We also got a bunch of pictures from that, so that's what you'll be seeing today. And some pictures of some cows on the course. Just chillin' there, doing their thing. 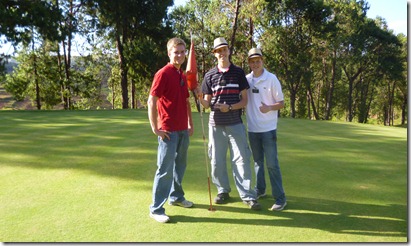 Mom, I couldn't help laughing when I read your email about how Sunday is a day of rest, after church. First off, that's just funny. Second, it doesn't really count for missionaries. I always feel like we're supposed to just rest on Sundays, but missionaries still just go out and teach like any other day. Go figure. But it's always good work.

Dad, it sounds like this 50 miler should be fun. Speaking as one who walks what feels like 50 miles each day, I advice bringing a lot of water. You can never have too much, but you can have too little. The same with trail mix. Plus, trail mix is just dang tasty.

Speaking of tasty, what's all this about Hostess going out of business? Is that even possible? Will the weight of the average American suddenly drop? (I guess McDonald's is still there, but it's going to have to really start working now) Most imortantly, where the heck am I going to find a Zinger when I get home? I don't know man. It's a messed up world out there. Signs of the Apocolypse.

Lindsay, keep up the good work in the business. Know that I'm praying for you. It sounds like things are starting to turn up a little bit, so find a way to endure. That's one thing I've been learning a lot about the gospel. It's not just about making it through life (enduring), but enduring well. Have a good attitude, and just try to enjoy the journey. And blessings will rain down for it. Also, you asked about weddings here in Madagascar. I don't know if there's really a party, but some of them will go rent a bunch of cars with their families and drive down the streets, way slowly, honking their horns. Hey look, we're married. That's about how fancy they get around here.

David, it appears that you've been in some tragic, likely near fatal, accident, because my inbox is rather devoid of things from you. Considering the full body cast that you are now sitting in, as that would be the only logical reason for missing an email, I'll let you off for this week. Same goes for you too, Stacey. Get well soon.

Julie, I always love hearing about what a little beast this James of yours is becoming. Just remember the whole "enduring well" thing from Elder Arrington. It sounds like you've found some good ways to help you cope with it, so keep it up.

Steven, try to squeeze a little time in between your morning workout and your post-morning-workout workout to send a little email down my way. Or some other time through out the day. That's one thing I've noticed since coming on my mission. You make a schedule and stick to it, and suddenly effectiveness flies through the roof, dropping off being bored and wasted time to the wayside. Wayside School. Sideways stories. Somebody read those books again, and let me know if they're still as awesome as I remember.

Emily (and family, which goes for all the other sisters too), it sounds like Dave is going through quite an ordeal. But from what I hear, the doctors know what's wrong with him and declare that more money is needed to fix him. Did I say money? I meant surgery. Pretty much the same thing. Regardless, he's in my prayers too (and so are you). I would recommend finding some food with iron in it afterward though, just in case. Doesn't spinach have iron? I think it might. I'll just skip over the Popeye references that we're all thinking and just say spinach is supposedly good for you.

All in all, it sounds like the family is doing mostly well, including the newest member of it, this little Kellen Leybas fellow. Stacey, see if you can stop him from growing up for the next... 2 years or so? Or not, I suppose. He sounds all healthy and alive, so make sure that continues. I hear that food is important for people of his age group. Try using some of that. And now I feel like he's one of the little Tomagotchee things (or however you spell it) where you have to give him food and presents and make sure he's happy. So yeah. There's my keychain-child parenting advice for the day.

Everyone else, keep up the good work, keep enduring (well), and keep writing. I love hearing from you all, and do my best to respond to everyone.