Subject:  “Would it break her heart and crush her soul, of course!  But you’ve just got to do it.”

I'm not really sure what to talk about here. Ever. I almost walked into a cow a couple days ago. I was just walking down the street, looking around at the little shops and everything, and I look up, to see this cow walking straight at me. It sounds pretty lame, but it was actually really intense as I dove out of the way, saving myself and various small children from the imminent threat. Imminent. That's a weird word. Good times. 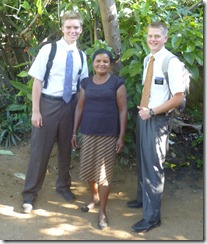 I finally made my some nice mistakes in the language that I can share. One of them was when I was talking about Lehi's dream. I pulled out a picture book (which is super handy) and start describing Lehi's "nify". Except the word for dream is "nofy". I was describing Lehi's teeth. They laughed for a good while. It was pretty fun. And then later I was trying to explain to somebody where we had to go. Imagine a mountain, with you on one side, and having to get to the other side. And the only way to get there is straight up, then back down the other side. That was pretty much it. So I'm trying to tell them we have to go up from where we are, and down the other side. Then we'll have to come back up and return to where we are now. And repeat like three times. "Ilianstika miakatra, dia miditra, dia miakatra, dia miditra." Except that means "we need to go up, then enter, then go up, then enter." Just a little weird.

On the note of yesterday, things did not go very well. For one, five of the seven people that we had planned to teach couldn't learn, pretty much all because they were out of town. If only we had known this earlier. So it was kind of an interesting day. We kept having to climb Mount Burns-the-Quads and slide back down the other side (but with no slide). It was pretty rough.

And on the note of things that are rough, sand paper. In related news, church was rough. There's just so many people that promise they'll come and thing "something came up". WE'RE TRYING TO SAVE YOUR SOUL HERE. But you have to come to church. They just don't seem to... care? Or at least they care more about other things than going to church. So we're trying to help them see that if they trust in God and show him (and themselves) that He is the most important thing in their lives, He will provide for the rest. But they still fear the world more. It's just kind of frustrating.

But church also had some good parts, obviously. The meetings all went pretty well, but the fun stuff happened right after church ended. They branch president had invited us to a branch council (which they've never done before), but we had to wait for a little bit. As we were waiting, this guy comes up, dressed up like... I don't even know what. Apparently it was some religious clothing thing. Anyway, he walks into the branch president's office, talks with him for a minute, and leaves. We found out later that this guy had invited our BRANCH PRESIDENT to attend another church. He had walked into OUR church, walked up three flights of stairs, to invite the LEADER of the branch to attend another church. Nice try, good sir.

Also, really quick. I've been talking a little bit about getting music on the iPod here, and after pulling a few cyber-teeth I found a solution. Suffice it to say, I now have twelve Enya songs on the iPod. I'll work on the rest next week. But thank you Dad for your help on that. I was also wondering if you could send the How to Train Your Dragon soundtrack. But if you do, leave out "Test Flight", because, as Steven surely knows, it's the best song ever. And if I have it, I'll probably be listening to it too much. But the rest of the soundtrack should be good.

I'm trying to be more effective with this computer time, so I haven't had time to read a lot of your emails (but I'll print them out to read later), but it sounds like everyone is doing well. Especially this newborn "Kellen" fellow. I look forward to greeting him when he is almost two years old and still knows that I'm the coolest uncle. Mwaha.

Everyone keep up the good work! Especially you, David. With Jordan leaving, it sounds like you're back on the hunt. And in this endeavor, I wish you luck. Good luck.

And everybody else keep doing stuff too.

Thank you all for writing,