In which we learn about the Christmas package.  Not sure what was missing, though…

Subject:  "Are you telling me you made a time machine... out of a Delorian??"

Well, I'm never really sure how to start these. Hello. That should work.

Suffice it to say, these week has both been awesome and difficult. First off, Christmas. We had a little party with the other missionaries in our zone on Christmas Eve, with a white elephant thing. I ended up with this awesome painting of some baobab trees. 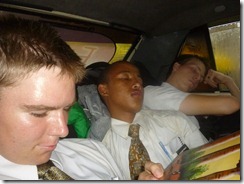 Booyah. Then we had to come home. Thanks to it being so close to Christmas, it took about a billion years to get from Analakely back to our area. It was a really long trip. Just a ton of traffic. But we were in a taxi, so it was pretty comfortable. Relatively. So we all kind of slept. Good times.

On Christmas we were just supposed to do some service, which we did. Elder Landon and I brought a bunch of rice and bananas to Pascal and his family (who I got a picture with), Francis and Josiene (and a toy for their daughter), and Leonce and his family (parenthesis). We shared a little spiritual thought with each family, and watched "Finding Faith in Christ" with two of them. There was a little disappointment at one of the times, just because a certain somebody had been drinking, when they had told us that they had quit. And he was kind of a jerk to his wife for her not being ready. Apparently she had been planning to make some food for us, but we came by earlier than we had told her, so she didn't have time. But he was drunk, and it wasn't very fun. 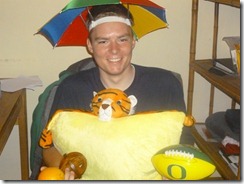 Other than that, we opened presents! I got an orange for my stocking and an umbrella hat from Elder Randall, which was pretty dang awesome, and... let's see. I got this crazy little puzzle ball thing, which is kind of weird, because it came with instructions on how to solve it. Kind of defeats the purpose of a puzzle, don't you think? But I didn't look at the instructions, and still solved it. I still got the magic. Anyway, I also got a Huggy Pet, which is apparently a make-shift Pillow Pet. And it's super cool. His name is Timmy. And I got a rather delightful Ducks football, and a Frisbee thing. Sweet. Ultimate Frisbee Football, here we come. 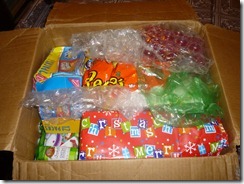 Mom and Dad, I also am working on sending a picture of the box when I opened it, just because there was some free space that didn't seem very... Arrington-package like. Probably stolen from en route. Oh well. But there was also Cracklin' Oat Bran, which has pretty much made this the best package ever. Delicious cerealness.

And that was pretty much Christmas. And we watched 17 Miracles, which was great. But now, back to missionary work.

The work here has been going pretty good, but with a few difficulties. Our biggest problem is just getting people to follow through on their commitments, particularly attending church. There's one lady that we found pretty close to when I came to Madagascar, named Arlette, and she keeps promising that she'll come to church. And then Sunday rolls around... and she has "other stuff to do". On Saturday we kind of 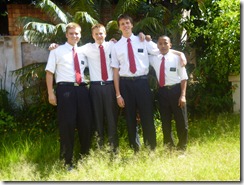 broke it down for her. She keeps saying that she's been getting a bunch of blessings from God already for just reading the Book of Mormon (like one verse per day) and praying. To Jesus. We keep telling her that's wrong, but she doesn't change it. Anyway, Saturday we told her that if she does not come to church, God will take away the blessings He's given them. He say that it's enough to follow a couple of His commandments and ignore the rest. YOU HAVE TO FOLLOW ALL OF THEM. We finally committed with her (again) to come to church. We talked about how her schedule would be on Sunday, what things she could do before or after church so that she could attend. And at church yesterday, guess who didn't attend? Her. So that made us pretty sad.

We have another lady named Lily, who hasn't been coming to church because of her work. She came a couple weeks ago, but the week after that her boss got mad at her, and she hasn't been able to attend since then. We keep telling her that if work is going to be in the way of church, then she has to find a way to get Sundays off, or leave the job. Her situation is a little more understandable than Arlette's, because if she doesn't work, her family is going to have a really hard time getting along. She needs a job. But that job is getting in the way of church attendance, and that means that she (and the rest of her family) are having their baptism date pushed back. It was supposed to be on January 12th, but because she didn't attend, we have to push back the date. If she won't be able to attend church before her baptism, she won't be able to after it. Which is not okay. So we talked to her and asked if she believes that God will help her if she shows her faith in Him and puts following His commandments above everything else, and she said yes. But she is still afraid to leave her job. So really the answer is no. It's just frustrating. If you're not going to attend, don't promise that you will. And if you don't really believe that God will help you, don't say that you do. 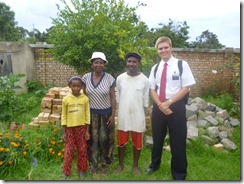 So we have people that don't follow through on commitments because they're afraid of what might happen, and people that are just lazy. We'll walk in and ask "Did you read the pamphlet we gave you?" And they always say "no, I didn't have time!" Boy, you were just sitting there watching TV! You couldn't have put your eternal salvation above a little soap opera? That's in French?

That's another random thing. Most of the TV shows and things around here are in French. Not very helpful considering how few people know French around here. But they also get things like Tom and Jerry, which don't need words. Because Tom and Jerry is awesome. 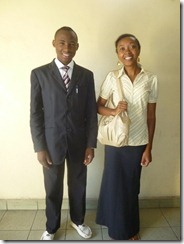 I'm not really sure what else to talk about here. It sounds like everyone is having a pretty good time back at home. It's just crazy hearing about people just GOING to watch a movie, or eating out. Just doing stuff that I used to think was normal, but now it's like... people can do that? Weird. Enjoy that. Speaking of which... actually no. I was going to ask how Les Mis was, but don't tell me. I'll find out when I get home. Stacey, be sure to add that to the list that I know you've been diligently keeping.

Also, it sounds like people are flying a lot. Arizona, Oregon, Utah, Idaho... enjoy that. Planes are cool.

It sounds like everyone has been staying pretty busy with all their what-not. Keep that up. Dad, the server's been working pretty well today, and you should find that there are a few pictures waiting for you there. Use them wisely.

All in all, the work here has been tough, but we keep at it. All of you people, especially if anyone reading this has recently been talking to the missionaries - KEEP YOUR COMMITMENTS. You'll get blessings for following God and showing Him that He is the most important thing in your lives. Because, let's face it. He created us, and gives us everything we have. We'll always owe Him for each blessing He gives us, and when we pay him back by following His commandments. And then He continues to bless us, and we owe Him again. The least we can do is keep His commandments.

Keep working hard everyone, know that I'm praying for you all, and I love hearing about your lives, no matter how simple or boring you might think it is. Trust me, it's awesome to hear about everything.