Since Michael’s humor always seems just a half bubble off plumb, Julie adds the following explanation:  FYI, when Michael says "I'm pregnant. With Josh Groban's baby!", he is referring to a quote from Parks and Recreation where the girl says that line, and the other guy immediately spews out his drink straight out like a fountain out of his mouth, in shock and surprise. Thus, what Michael probably did after discovering there was no filter for the water he was in the process of drinking.

Subject:  "Why is the car stopped?" "It's frightened."

It's another P-day, and we still have to run around. It's kind of hard for us in this area, because the office and all the exciting stuff is in or near Analakely, which takes about an hour to get out to, then come back, plus a bunch of walking between the two. So we're still pretty busy.

On the note of missionary work, everything is going pretty well. I've definitely made some... unforgettable memories. Unfortunately, I'm not at liberty to discuss them at this time, so all o' y'all will just have to wait. Mom, it will be interesting to hear from you when you read through this journal. 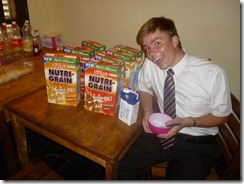 One of the things I'll release to the public, is that I finally fixed some of my own things. On one of my ties, the little tag thing at the back had broken off, making it impossible to use a Tie Saver with it (a little thing that attaches the tie to the shirt). As I'm sure David understands, after you've used a Tie Saver, you never go back. So I had to fix the tie. I broke out the sewing kit and the Mission Impossible theme song and got to work. After I finished, I'm pretty sure force of a thousand semi trucks hanging from my tie couldn't separate it from my shirt. Mission accomplished. And it still looks awesome, so that's another bonus.

I've still been struggling with the language (something tells me I'll finally get comfortable with it right before I head home), and it's caused some interesting slip ups. One of them was pretty stupid, even for me. Since the person was talking in English. We met this lady that owns the house that one of our investigators works at (named Boto, and he's crazy awesome), and started talking. It 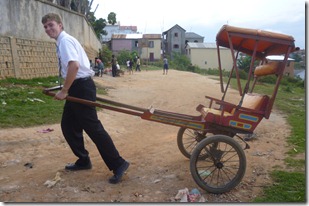 turns out she had studied at a bunch of universities in the US for some kind of program, and had learned some way good English. After asking my companion where he's from (Utah, of course) she turned to me and asks me "and where are you from?" In English. And I, in a typical red-neck, cow tippin' Oregonian way, say the only thing that comes to mind. AMERICAN! Wait... that's not right. I'm... from... Oregon...... So that was pretty interesting. And while I refuse to tell you my Malagasy mistakes (since I can't remember any right now), I seem to remember other people's just fine. Gotta work on that.

Just another kind of awkward thing that comes to mind is that I got on a bus and this Malagasy guy climbed on right behind me, sat down next to me, turned and said "Hello my dear" in English. This could be a very interesting bus ride. It turns out he was actually pretty good at English. Just that first moment was weird. I told him I was a missionary. And he was like "oh, you're the people that don't use the Bible!" No... we use the Bible. "I don't believe that!" Okay... so I pulled out my Bible (which looks awesome since I got it bound) and explain that we do use the Bible. "No you don't!" Okay, let's just think about this for a minute.

First off, I think we would know if we use the Bible or not. Second, why would I bother to carry around a book (which is really heavy and possibly breaking my backpack) IF I DON'T USE IT. He was just fun to talk to though. 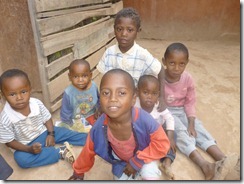 Which reminds me, we've been getting tons of people asking why we haven't headed home yet. It seems we're supposed to go spend our time with our families since the world is ending this month. There's a bunch of churches that believe that around here, and Elder Landon are really looking forward to laughing at them after they realize they're wrong. Not really. But still kind of.

If anybody has been wondering about the water here, we're not supposed to drink it. Kind of. The sink water isn't clean enough. But in the churches and mission homes there are filters so we can still drink from it. I went to fill up my water bottle at the church the other day (there was an activity there) and after getting some, I started drinking it. Right as a Malagasy walks up and tells me that the filters is broken. Also, I'm pregnant. With Josh Groban's baby! (we'll see who gets that reference) And it explains why the water tasted like 400 year old egg. It was fun. 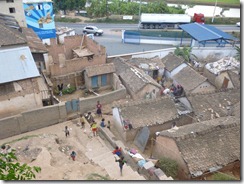 Anyway, I should probably go now. There's work do be done. I've also attached a couple pictures on, since Madagascar is decidedly against me getting onto the server. We got a bunch of cereal for super cheap, and we're pretty excited about that. They have these carts here that you can go for a ride in, so I got a picture pulling that. And there's a picture of my leg. Covered in ever so itchy flea bites. Good stuff.

Anyway, everyone keep up the good work, keep emailing, and stay awesome.