Great stories and great pictures!  In fact, the pictures are so good, mom exclaimed “these are the pictures every mom needs to see!”  Nice job, Michael!

It appears that he got through a power failure without losing all that he wrote.  It also appear that he was in a hurry while writing this—perhaps the life of a missionary?  In fact, he gives us a quick overview of his daily life as a missionary!  We love to hear what he has to say!

Oh, and what time shall we call on Christmas Day?

Well. Certainly an eventful week. First off, right after I sent off
the email last week, we went to Analakely. After hanging around there
for a while, it started raining. A lot. So we decided to wait under a
canopy that some people had put up (there's tons of these little
places that sell random stuff, and they all have some kind of canopy
or cover for the rain). After it had rained for a while, we figured we
should head home so we could get back to work on time. So we put on
our jackets, and set ourselves afloat. At first we tried to stay on
the crosswalks and above the water, since the streets had flooded 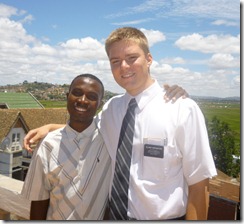 quite thoroughly, but after a minute or two, it just didn't matter. We
were already soaked through and through. So we started just running
straight down the streets, through the flood. And while we did that,
all these Malagasies who were sitting in their little covers started
cheering for us. For real. It made us feel pretty awesome. And then we
saw a car stuck in the water, so Elder Randall and I went over and
started pushing. And of course, the fine Malagasy people started
cheering again. Except they cheered really weird. "Oui oui vazaha! Oui
oui!" Yeah... I do not think that means what you think it means. But
he gave it a shot. Good man. 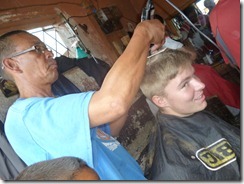 Other than that, it's been a pretty unevntful week. I finally got my
hair cut, since it was pretty long. And apparently my head has been
getting sun burned since the hair is really short now. So that's kind
of... odd. I thought that only happened to bald people.

A certain somebody keeps asking me about life as a missionary and
things like that, so I'll run through what happened yesterday. A day
in the life of a missionary, if you will.

First, we wake up at 6:30 (yes, in the MORNING) and get ready for the
day. Showering, eating breakfast, that kind of stuff. Then normally we
would do personal studies from 8 to 9, companionship study from 9 to
10, and language study from 10 to 11, with some 12 Week Program things
crammed in there. But since yesterday was Sunday, we just went to
church. Then came home and ate lunch, and headed out to work for the
day. 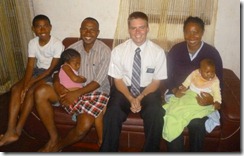 Our first appointment was with Paullette, a kind of old nonmember
family member of this way awesome family. See if you can keep that
sentence straight. But she wasn't there, so we taught the next person
on our list, Hery, who is also part of that family, and not a member.
Yet. But he's really diligent and works hard. Good man. And we taught
another part of the family that had become inactive. They're all
awesome people, but sometimes they just get lazy.

Then we walked about a gagilion miles to our next appointment with
Adolf and Louise. They had also gone in active a while ago, but
they're coming back to church and doing way better. I got a picture
with them too. They're the family with lots of kids. A slight problem
with them though, some things went missing at Adolf's work, and his
boss thinks he did it. So that's no good. 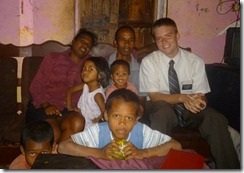 Then we also taught Georgette, recent convert, super awesome. Sorry,
I'm really running out of time, so After we went to Georgette, we
stopped by Noel's house. I may not have told you before, but his wife
hasn't been able to attend church, because her boss "has to have food
ready for her when SHE comes back from church". So that's kind of
mean. But Lily actually got to come yesterday! We have a baptism date
for her in about three weeks, and we really need her to keep coming to
church every week for that to happen. Hopefully she'll be able to make
some kind of permanent deal with her boss. We'll see.

Dad, you asked about the Enya music. The short answer: no. I finaly
remembered to bring my iPod today, with the cable. Then I found out
I'd have to download iTunes. No big deal right? Wrong. It took about
45 minutes to load and get ready to be used. Meanwhile, I finally got
onto the server and started the playlist downloading. And it said it
would take about 3 hours. So I stopped that, and started ONE song
loading. Even that took about 20 minutes. Then I opened up iTunes, and
it wouldn't recognize the iPod or do anything. So I put in my account 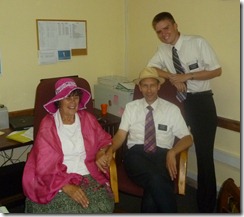 information, and it finally showed up with everything. I try adding
the one little song, and iTunes pops up with a little box that says
"are you sure you want to delete everything on this iPod?" NO! I just
want to add a song! So that's been causing some grief.

And the power just went out here. For no apparent reason. Fortunately
I'm on a laptop with a full charge, so this is still going. But
there's no internet, so I won't be able to send this. Yet. We'll see
if it turns back on sometime today. I really don't know what to do if
it doesn't, so... we'll see.

Basically, thanks everyone for writing. Keep up the good work!

PS: We just now came back to the cyber after a really quick trip to
Analakely. Elder Rakotomalala dropped his camera last week, and then
it was stolen. That's rough. So we pooled together some personal funds
and bought him a new one. Also, I was kind of scared that I'd get a
bunch of hate-mail about "why haven't you emailed yet!?" And when we
got here I remembered that even though it's 3:45 here, you are all
probably still asleep. Victory is still mine.

PSS: I actually uploaded some pictures to the server. I'll describe
them as well as I can remember. In no helpful order whatsoever,
there's a picture of me on top of our church building. He's going to
Mahajunga for the next three weeks or so, so we thought it would be
good to take a picture. There's also a couple pictures with families.
The one with lots of kids is Adolf and Louise's family. The one with
me in the middle with the lady on my left holding a rather fat baby is
Fr. Toky and Sr. Lina's family. They were less active, but we're
working on bringing them back. The white people is Elder and Sister
Grey. They've been the health missionaries for a while and now they're
going home, to be succeeded by the Shupes! And there's a picture of me
in front of some water. It was the only thing I could really think of
that would make a really stretched out and short picture.

PSSS: Dad, Elder Landon says the best way to do a call in his
experience is to just have the family in America call. I don't know.
If that's okay with you, I would be fine with that. He also says his
family is planning to call at about 7 pm our time, which would be
something like 8 am for you? So when would be the best time for you to
call, before or after?