A new companion—and he hasn’t been out very long either!  Now the comparisons begin.  And we learn what was so great about Elder Landon.

And it’s good to hear Michael so focused on missionary work!

Well, in case you weren't aware, another week has gone by. Has time always flown by this fast?

I officially have my second companion now. My mission-mom, as they say. Elder Eppich is a good fellow. He came out on his mission only two months before me, and according to one of our members here, Elder Eppich and I are about the same in our Malagasy speaking skills. Go figure. Although it makes me feel pretty awesome. His first companion made them skip language study, so it makes sense that he would have some trouble learning. Add that to Elder Landon having been a great teacher, and I feel like I've progressed quite nicely. I have to say though, he understands far more than I. I speak decently, he listens great. We all have our areas to shine. I can get along, but we'll walk out of lessons and usually he'll bring up something that I had totally missed. It's really good to have someone who can check you on things like that. 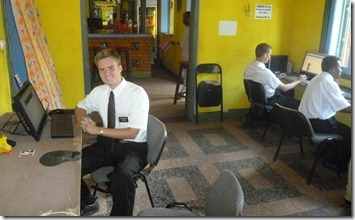 On the other hand, since Elder Eppich just barely moved here, it's up to me to lead the area. Which is hard. Really hard. The last two or three days I've just been 100% drained when we get home. Paralyzed from the hair down. It was a simpler life before, not having to worry about where to go or what to do if something goes wrong. Just let Elder Landon do that. I could just stand around and let him pick something. But now it's just up to me if people aren't at home. Which happens far more than I would like. But I guess it's not all terrible. We ended up doing some tracting and met a really nice lady who seemed interested to learn. And she's pretty smart. Unfortunately, she lives with her brother who is a pastor for some other church, so we'll have to gird about our loins the armor of God, and prepare to do battle. In the nicest way possible, of course. David sent some interesting advice in his last email, offering that it might be better to not argue with them, but find points to agree on and bear testimony of the truth. He also mentioned a line from Preach My Gospel (and didn't cite his sources, tsk tsk) so I figure you really can't go wrong there. Advice from a brother, an RM, and Preach My Gospel. It's worth a shot.

Especially because I never know what to do in real teaching situations. I just don't have a solid enough background yet to really help somebody understand what I'm trying to say. One of my biggest problems is not using scriptures. Which I'm trying to work on. Elder Eppich told me of a quote from some apostle or someone like that that said if you memorize one scripture everyday for two years, by the end of that, you'll have a photographic memory. How awesome would that be? I'll give it a shot. If it works, I'll remember everything. If not, there's 730 scriptures memorized (or 731 if there's a leap year). I bring that up mostly because I've started into it, memorizing them in Malagasy, and I've already been able to use some of them when I'm teaching. Even if you can't remember the whole thing, you at least know where it is and what it's about. And it helps with the language. So there's really no downside.

Speaking of the language, with Elder Landon leaving and my new companion not having been out very long I was afraid that we would have no really skilled Malagasy speakers in the house (actually Malagasy people excluded). Fortunately, Elder Hansen replaced Elder Randall, and that kid is good. Like the smell of bacon kind of good, with regards to the language. He's way good. And way nice, and way cool. Even better, he's more than willing to help us study and learn Malagasy, and way good at explaining it. Which is really hard. Malagasy and English are just WAY different. Which is probably why Malagasies think different than Americans. It's got to have something to do with that.

Mario and Santatra. We waited outside the church until sacrament meeting started, and they still hadn't shown up. Which left us a grand total of two investigators at church. Not the best week. So we went upstairs, and sat down. Then, just as the first hymn started, they walked in, trailing a cloud of glory about them. Not really, but it was fantastic to see them. So they ended up attending church again, and still had a great time.

Romen. We've taught Romen a couple times and it sounds like he could be another Mario of sorts. He's way smart, knows the scriptures, and told us that he had been trying to find the true church for a while, but just didn't see it. After a while he just got tired of hearing all the preachers and priests and everyone just tell him that their church is true. We came in contact with him, and one of the first things we told him was that he can pray and receive an answer for himself. We don't tell him to just accept what we say, like in other religions, but we ask him to pray so that he can learn for himself. He really liked that. He also asked us something about the Bible that we really weren't sure how to answer. He pulled out a verse in Matthew... 22? Something like that. Jesus asks the Pharisees "who is the father of Christ?" they respond that he is a son of David, and Christ basically says "if David is the father of the Christ, than why does he call him Lord?". Romen was confused about the timeline of that, since David had been dead long before Christ came. It also brought up a really interesting question. Is this scripture not referring to prayer? Then does that mean that David prayed to Christ? I don't know. It's confusing. That's just another reason the Book of Mormon is so important. And having a living prophet.

As for pictures this week, apparently I didn't take any. But Dad's been asking for a picture of the cyber place that we go to, so I got Elder Eppich to snap one. Welcome to the cyber world of Madagascar.

Thank you everyone for emailing, know that even if I don't have time to read long emails I still print them out to be read later, because hearing from people back home is the best thing ever.

PS: Dad mentioned a "friend" who wants to send a package to a missionary, and asked what could be in that package. First off, some pens would be awesome. Some good old, classic Arrington pens. Dad, you know the kind. But that's more of a stocking stuffer. Other than that, I've heard that Jell-O has a cheese cake mix that tastes rather delicious, and one or two of those would be greatly appreciated. Cakes are kind of hard to make, but the cheese cake mix that Elder Landon had was super easy. Just an idea. Some M&Ms too, especially if you can find those ones that are filled with peanut butter. It's basically a bigger Reese's Piece. Basically anything prepackaged and easy to prepare. And candy. You really can't go wrong.

PPS: Stacey, just last week I got your Christmas package. While I had never been big into gummy candies, I don't think anything has ever tasted so good. And it's been far too long since I had had Nerds. Keep those rolling.