Another great letter indicating that Michael really gets it as a missionary.  Michael is still learning about working with a different companion—not a bad thing, he’s learning that every companion is different.  How you work with them is different.  What a great learning experience!

Subject:  "Just be glad I didn't go with that who "automobile" idea. Yeah, like that's going to make a lot of money."

Well, I didn't think this out too well. Usually I'll just go through my planner and share a couple things that happened from this last week, but today marks a new missionary planner (#5 to be exact), so I have none of the details I had planned to use. But I'll do my best. 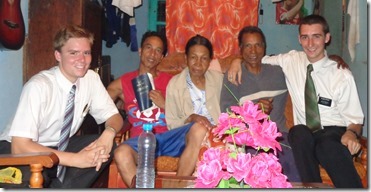 First of all, I just remembered all the meetings and things we were going to have with our branch president. A couple weeks ago we had a zone meeting where President Adams gave us a bunch of stuff about how to work with the ward (or branch). Awesome. The Sunday after that, we had a stake meeting, so no branch council. The Wednesday after that, President Fetra cancelled the Priesthood meeting, so nothing there. The Sunday after THAT, he cancelled the branch council again (see the pattern here?). Honestly, I'm getting kind of sick of him being a total bum, so I just told him that there WILL be a meeting this Wednesday, and he IS going to come early to it so Elder Eppich and I can teach him how to run a meeting. We're supposed to just let him lead everything and not overstep our bounds here, but he isn't helping the missionary work at all. Which will hopefully change. Find out more in the coming emails.

Other than that, the work still isn't quite going as well as we would like it to. This last week we've had about nine or ten lessons planned for each day, and usually come home with only three or four actually taught. It's pretty depressing. But it gives us a lot of time to do some contacting, which is never a bad thing. Still, we would prefer to teach.

On Saturday we had planned to teach four people in this one area. So we go and check on one to see if they can learn. No, but later should be good. We go to the next one. They'll be ready in an hour. The next one, was ready to learn then and there. The fourth one the husband was gone, so we couldn't go in. Still, it's already been an hour, and the husband should be back soon. So we go to teach #2. Still no good. #1, left their house. #4 again, the husband still wasn't there. So we just ping-ponged around there for a while trying to catch one of them at home. To make a long story short, only that one person had been able to learn out of all four of those.

That's been pretty much our last few weeks. Which is saddening. But I've been getting better at contacting people. I don't know if I said this before, but President Adams has given us a challenge to place 20 invitations to church each day. This challenge could offer rather a challenging challenge. Challenging-ly.

And all those thoughts of being shy or thinking it would be awkward to talk to somebody are just getting thrown under the bus. I've always known this, but I'm finally willing to act on the facts that: 1) it could be the Spirit that is prompting me to talk to them. B) worst case scenario, it helps me get better at the language. *three*) VERY worst situation, if I totally embarrass myself, I'll probably never see that person again. So there's really no harm done. Just throw yourself out there and start gospel talking. Even though some people just walk away without a single word to you, you're putting forth the effort. (The more you try, the more you fly. And that's what really counts!)

Effort. Effort. My companion. I have to say, teaching with Elder Eppich is a whole new ball game. For one, Elder Landon where at a point (after four months, mind you) where we could figure out how to switch off really well, and I would say we did a pretty good job of teaching in unity. With Elder Eppich... He's different. I feel like I'm talking a lot more than I should, but even if I stop for a minute or two to let him take over he'll still just kind of sit there. He still teaches, it's just not nearly as smooth as it could be. But we talk about it sometimes, and he's getting better. Good stuff.

Another thing I'm starting to see better is my own train of thought of teaching. If that makes any sense. When I first came here I was all over the place, just trying to make my mouth say things to take up time. The longer I'm here though, the better I'm getting at seeing the end-game, what I really want the investigator to understand, and how to get them there. Which is really helping get the people more involved in the lessons, so they'll feel the Spirit more and have a greater desire to seek the Spirit on their own time.

Dramatic subject change. When Elder Landon left, he had about four months left of his mission. In that same transfer Elder Hansen, who is from the same group as Elder Landon, came to the house that I live in. So I'm now living with a missionary who is two months older than me (in mission time - Elder Eppich) and one who is going home in just over three months. Suffice it to say, it is his pride and joy to make us trunkie. It's rough.

And that's pretty much that. It sounds like everyone is having a pretty great time back at home, with babies popping out right and left, leaving Julie as the last "man" standing. Good luck, time bomb. All the babies so far appear to be of an abnormally cute nature, with adorable levels flying off the charts.

All of you keep up the good work. Study, work, ski (Steven), and live life. Being separated from life like this is super weird, and since I can't take part in it, I trust all of you will party twice as hard, for me.

Thank you all for your support,

Here's a picture with some less-actives that we've been teaching. They are officially less-active, but Hery still reads the Book of Mormon, and holds it up when people take pictures of him. Go figure.