This is one of those letters where you really feel like Michael is understanding what missionary work is really about.  His focus is there continuously in his letter.  I’m sure he has normal stuff to get done here and there, but I do like his focus!

People would go blind from over exposure to pure awesomeness! True story. And good movie. 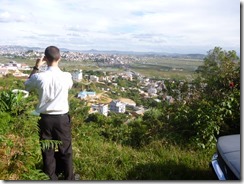 My first full week with a companion other than Elder Landon. Quite an interesting change, as I believe I said before. But Elder Eppich is way cool, and we're having a great time.

The one kind of wierd thing is how many lessons we teach each week. I was looking over our weekly stats for the last couple weeks, and the week that Elder Landon left we taught almost half as many lessons as normal. Odd. Same with this week. Feel as bad about this week because we lost a bit of work time thanks to a zone meeting and stake conference, but still. Half as many lessons is quite a difference. I was pretty bummed about that.

Until I started writing about it in my journal. I had a little something of a revelation. While it's true that we're teaching far less people than normal, it's forcing us to FIND new people. And finding has been going great. Just about every door we knock on has a father lead family behind it, just waiting to hear about the gospel. Here's a couple stories for you.

We actually tracted into this lady named Charlotte a while ago, but since there were no other guys there with us we couldn't enter the house. But she had seemed way cool. So Elder Eppich and I went back to her about a week ago, and sneakily taught her a little bit about the Restoration. Rather than entering the house and breaking mission rules, you stand outside and present the Restoration pamphlet to them, explaining a little about each section. It gets them started a little into reading it, and you can kind of cheat teaching them, even if you have no other guys with you. AND she set up a time for us to come back and teach the rest of her family (except her husband who would be at work). So we went back on Friday with Leonce, who found so 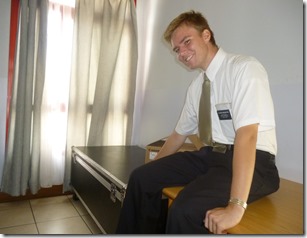 me time to come with us, walked into the house, and found out that her husband's brother lives there and had been there the whole time. We could have taught them. Anyway, we walk in and start talking about their reading. Surprisingly, they actually HAD read. Surprisingly 2x, they pulled out the book and immediately asked what exactly an Apostasy is. After we explained that, they asked that if God had taken prophets from off the earth, are we still in an Apostasy? Fantastic question. We turned the page in the pamphlet and started into the Joseph Smith story. They loved it, and because of a challenge that President Adams has given all the missionaries to start inviting pretty much everyone to church, we invited them to church. And guess who came to church yesterday. We had two total investigators. Prinsia, who you may remember to be the most diligent 15 year old in the world, who comes to church and everything in spite of how lazy her parents are. And the other one? The brother of Charlotte's husband. This guy had just randomly sat in on the lesson, and followed the challenge to come to church. I'm way glad President gave us that challenge.

Another, shorter story, we were trying to find something to do one night, and everybody was busy. I actually made a list in my journal of all the people that we had tried to teach, and why we couldn't for that day. Finally, it was about 7 o'clock and we had to decide to either just go home early or try to teach one other lesson, by knocking on their door. And in this country, people sleep at 7 o'clock. Regardless, we stopped at a street corner and just prayed, asking where we should go. As soon as I started praying, I remembered this lady named Josiene, that we used to teach, but had to stop after she stopped coming to church. She lived nearby, so we walked down that way. Unfortunately she had already moved. That's pretty depressing. But whatever. We turned around and started knocking on doors. At the first door, there were no parents home. No good. Second house was the winner. This 17 year old kid named Tanjona opened up and let us in, listened to the lesson, and said it would be fine for us to return again. His parents had been gone at the time, but they should be back later. 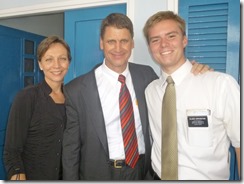 Another day, we're walking around in that same area, still with nobody to teach, and Elder Eppich reminds me about that kid that we had tracted into. So we go back to him, and his parents are actually there. We start talking and find out that most of the family is Protestant, except for the dad, who is Catholic. They listened really well, and invited us back. This family could be very ready to be united under the gospel standard, if you know what I'm saying. Also, Tanjona had read from the Restoration pamphlet, which was pretty cool.

I now realize that that story was actually longer, but you get the idea. Anyway, it seems that even though the work isn't exactly the same as it was before, we're finding a really good foundation of new investigators. Which I'm totally down for. It just took a little barriers for us to find them. Interesting how that works. We have barriers, and if we continue to trust in God, we'll still come out on top. Gotta love having God lead our lives.

Probably just one more story, that I'll try to keep short. We had tracted into this lady a couple weeks ago, and she seemed really interested. We came in to teach her again, and she had read some of the Restoration pamphlet. Sounds promising. But we had no men with us, so even though her husband didn't want to join us, she more or less forced him to. And pretty much all he did was argue. We asked him if there had been prophets after the time of Malachi, and he said yes. We asked him why they didn't write any scriptures. Well, he corrected himself, there WERE prophets, but they had been false prophets. 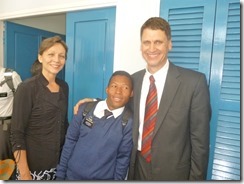 Okay, well let's just assume for a second that we're talking about something productive and helpful. But he continued arguing things like that throughout the entire lesson. Finally, I remembered what Elder Hansen (and David) had said recently. We shouldn't worry about trying to prove other people wrong. Just present the gospel as it is, straight truth from God, and bear testimony of it. With all this arguing, I figured this would be a good time to apply that.

I just stopped him, and told him "this is what we believe. God removed the prophets from the earth because the people were wicked. Gospel truths were lost. When the people were ready, God gave them prophets again to restore the truth. The people still rejected the new prophet (Christ, and after his death, Peter), so the prophets and authority were removed from the earth again. Truths were lost again. But when the people were ready, God restored the truth again the a prophet (see the pattern?), Joseph Smith. I have received an answer that Joseph Smith is a true prophet and I know that if you ask God, you can receive an answer too." Wham. Right after that, he just couldn't say a thing. Not that my goal had been to shut him up, but he just sat there and THOUGHT about what I had said, rather than trying to reject it. Thank you experienced missionaries, including brothers.

To wrap this up, I might just add that there has been an announcement from President Adams that came out this morning. Missionaries here are now allowed to email friends and priesthood leaders, as well as family members. Those friends that have been emailing me and not gotten responses, get ready to be responded. Maybe not today, since this main email has been really long, but next week.

Basically, thank you all for all your help and support,