Much more entertaining message this round.  David had a good Thanksgiving and apparently ate lots of food.  We even got a handwritten letter from that day, scanned and emailed to us.  Very cool.  Here it is (click on it for a full size view): 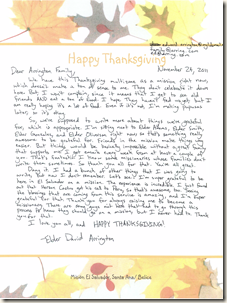 I won't even tell you all what that's from. You'll have to wonder.

This week was fun. We tend to teach really long lessons now, so our overall number taught is less, but I feel like we're teaching better, so it's okay. Maybe. We really wanted to find some news this week, but it didn't happen like we would have wanted. We did find nine, though, which isn't terrible for a week. The standard for the mission is fourteen, but almost nobody ever gets it. That's a lot of new investigators.

Out of the ones that we found, I think there's some potential, but I'm most excited about this one family named the Calderón family. They had met with missionaries before, but they just kind of stopped going by. They're super fun to talk to, they're already married, and they don't go to another church. And they don't work on Sundays. That's about every obstacle that we face right there that we now don't have to worry about with them. Fantastic. 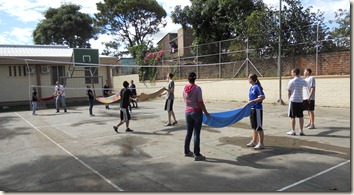 This was out of nowhere, but I just remembered, Dad, that you told me last week that you hadn't watched the game yet, so I'd have to wait until this week to hear about it. And you forgot the play-by-play. Fail.

Happy Thanksgiving, by the way!

Olga and her Husband are ready for baptism, we just have to wait for Rodolfo to get back from Guatemala. So this week, next week, or the week after, we should have a baptism. That's kind of exciting.

Deisy Guevara is also progressing fairly well. We just have to get her married, which she doesn't want to do right now. It's a whole conbobulated situation where she doesn't feel like her husband actually wants to get married to her, even though he's willing to, so she doesn't want to. Frustrating, but we'll get that cleared up pretty soon. 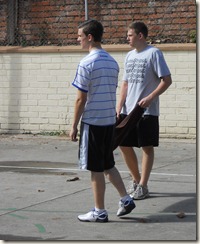 There are a couple other investigators that we're teaching, but nobody is really progressing at all. The biggest thing still is getting them to church. Everybody is just like, "Well, I'd like to go to church, but God will understand if I go to work instead." Or sometimes they just say things like, "Yeah, I'll try to go to church, but if I can't it's because God doesn't want me to." I think that may be a little bit blasphemous to say that God made you not go to church. But it's what they say, and I'm not sure how they don't see the irony in it.

Speaking of which, I just started reading in Genesis, and it's been really fun. And I noticed that it says like twenty times that some prophet had God appear to him, or that God came to a man and said something, and it's a little ridiculous. That's one of the classic arguments that good "Bible worshippers" have for us, is that no man can see God. Have they read the dang book? It makes me laugh. And smile, because I know something they don't know (the truth). 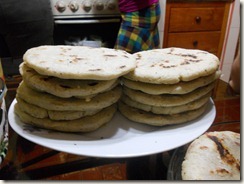 I'm also uploading a few pictures that I hope you enjoy. Mostly I stole them just now from my comp's camera, so they're mostly from activities and such that I've already talked about. We found a toad, though, and took a picture with it. There's also a couple pictures of me and my comp making shoes with a less active, Johnny. He's great, and is starting to come back to church.

Great story: last week, my comp bought some stuff that he thought was gel. When he started using it, he realized it was conditioner. Great times.

Also, Elder Huaman, as of a few days ago, hadn't made it through to Belize because of problems in customs here in El Salvador. Apparently they wanted him to go back to Peru first. I don't know if he ever made it to Belize yet.

Let's see... Thanksgiving day we had a multizone, as you all know. They basically ran it like a normal multizone, but they fed us a bunch of food after, which I was very much okay with. And then we had a pupusa dinner with some members. So I was quite grateful that day. And just plain ful. You see what I did there? I wrote "full" with one L, kind of like a play on the word "grateful". Yeah, that was lame. 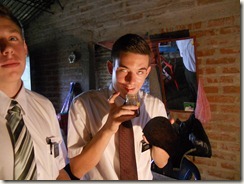 I've got another five minutes, so what can I say? It's been a blast to be here in Chalchuapa.

OH! I just remembered that I was going to say something about the call home, since Dad asked. My comp really wants to use Skype, which I'm more than okay with, but I'm good either way. The call did work really well for Mother's Day. I liked the conference call. And it was convenient. The biggest thing here is that Christmas is on a Sunday, so if we wanted to use Skype we'd have to get permission to do it at a member's house or something. We can't go to Cibers on Sunday. So I don't know what all of you would prefer, but I'm going to see if I can find some way this week to use Skype. I'll let you know next week what I find. But what would you all prefer? Let's run a family poll for it. I'm putting Emily in charge of that for no specific reason.

Congratulations to Lindsay, by the way, for running my business successfully this week. That's fantastic, and my wallett thanks you.

Nobody got Stacey to respond to my question. That's lame. Basically she just sent me a package, and I need to know if it's a Christmas package or not, so I know when I can open it. Dang you! I hate the suspense.

Also, I'm putting you all equally in charge of finding and uploading the Stardust soundtrack. I heard some of it the other day, and it's fantastic.

Alright, I'm out of time. I love you all, and thanks for sending me stuff like emails, packages, and promises you don't intend to keep. That was a movie quote, not me being rude.

PS: It was from Beauty and the Beast.

PPS: The subject line one wasn't.