A little shorter message today and the tone is a little less fun.  He was obviously sick even when he was playing water-balloon volleyball, but I think that was a week ago.  Hopefully, he just had limited time?  The good news is that we got a few pictures—including a baptism icture!

Subject:  I trust my barber.

I just took a look at the Arbor Manor site, and it looks great. Good work, whoever put that up. And the numbers this week are not quite up to the set goals, but that's okay. It actually makes me laugh, because we have daily and weekly goals that we have to report on every week, and that's about the same as ours. Except that instead of baptisms, you all want events booked. 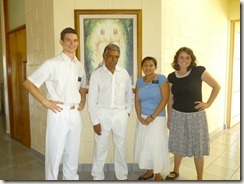 I had a slightly better week this week, but it didn't start out that way. I was really sick on Monday, but ended up playing water balloon volleyball and soccer and teaching a few lessons. Toward the end of the night, though, I just couldn't make it and we headed back home. I took my temperature and was about at 39º Celsius, which is a little over 102º F. I drank a ton of water, took some pills, sweat like a sweaty pig, and in the morning I felt fine. Except that my stomach was still a little bit weird. I just had to be careful about how much I ate. On Tuesday, my comp got sick. So he couldn't work all day. I spent most of the day in San Salvador doing immigration stuff, but then when I got back we just kind of went home. And then we didn't work a whole lot on Wednesday, either.

Once the week got going, we started teaching more. A lot of the branch is starting to work with us now, and we're finding a lot of new investigators like that. I think that I had already mentioned Olga and her husband, Rodolfo, who live with our clothes-washing lady. The wife is super excited to get baptized so that her daughter can grow up to be a missionary. The husband works in Guatemala for two to three weeks at a time. We just talked to them this week and had to move the date we had set for baptism from December 3 to November 26, which means that, if everything goes well, we'll have a couple of baptisms this month! The biggest problem, though, is that we need to get Olga's birth certificate from Honduras. I've been working on that for a few weeks, but it can take time. 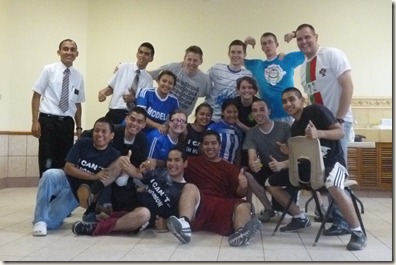 They are our only live dates right now, but we've put a few others with some of our investigators. They just haven't been to church yet, so we can't count the dates. We seem to be really good at teaching people and putting dates, but only so-so on getting them to church. However, we've been getting better. And now I feel like there is just nothing to write about. Which makes me feel really bad because I have hardly written anything. But my time is ticking away without anything popping into my head.

I miss going to the temple. We can go as a zone here, but my zone leaders just keep on avoiding asking permission from President. He's already said we can, we just have to let him know that we're going. I think I might just call him myself so that we can go already. It's kind of making me upset. 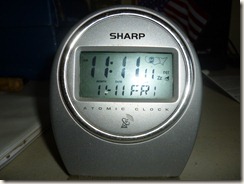 The business sounds like it's off to a fairly good start. I agree that it is somewhat like a flywheel. We just have to act as the bendex gear and rev that thing. Look that one up. I've learned a little bit about cars out here.

Football is doing well. I like to hear that we're easily beating the snot out of teams. But I wish they were teams like TCU and Boise State. And Utah. Oh well. It will happen when I get back.

That's about all I've got time for, so it's time to sign off. I love you all!