Rumors of transfers abound, but David must have the inside scoop. Doesn’t surprise me!  Mostly good news on the investigator front, and we get a couple pictures!  Apparently, he is still hungry…

Subject:  You ate the whole wheel of cheese?

I'm really tripping out because of this new gmail look. I decided to change, and I think that I like it. And now it doesn't underline all of the words I write and tell me they're spelled wrong. Even gmail went and learned English. That's fantastic.

Okay. The big news that everyone wants to know about is changes. And I have the dirty details. First, my comp, Elder Adams, is staying in Chalchuapa. I, am also staying in Chalchuapa. Got ya, didn't I? No, changes aren't that big of a deal this time around. A few people are leaving the zone, but none of you know them, so that doesn't affect you one way or the other. The one really cool and fun part is that Elder Huaman is leaving Chalchuapa to be a zone leader in Cayo (part of Belize). Guess who's his comp? That's right, Elder Duzett. So that's a bit of gossip you can spread over to his family, since I doubt they'll know until next week. Or they might. Either way, I think that that's awesome that we will have shared a Peruvian comp. In two different countries.

I think it might be fun to go to Belize. I'll have to start speaking English to President more. He sends Latins there if they want to learn English or are practicing it... Does that work the same for Gringos? It should. Let's not be racist. 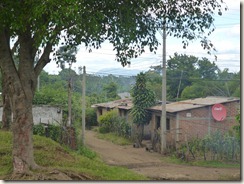 This week was fun. It wasn't super productive, but we did alright. Our numbers were a little bit terrible because we did a bunch of service projects and such, which don't really count as lessons. Also, we desperately wanted to find some news, so we were looking for a couple hours each day, but it just didn't work. We ended up setting up a lot of appointments for this coming week with full new families (six or more people in some cases), but they didn't let us teach them when we contacted them. So we may have a lot this week.

I just found out as well that Elder Gonzalez, one of my old comps, is training this change. Cool.

Our investigators are doing alright. Olga and Rodolfo are still getting ready to get baptized on the 30 of November. The only thing that we aren't sure about is the birth certificate that we're waiting for from Honduras. That, and Rodolfo has to go to church in Guatemala on his own before then, and I'm not sure if he will. That's nothing against him, I just have noticed that if you aren't there to cattle-prod people they don't go to church. And even then it's hard to prod them. As was evident this Sunday when nobody came to church.

Actually, one person did come to church, but they did so on their own. It was a girl named Nidia whose husband is the young men's president. We started teaching her a little bit, but not a ton because she lives really far away and isn't always home. But when we taught her last time we put a dead date for the 17 of December. We have a bunch of dead dates now. 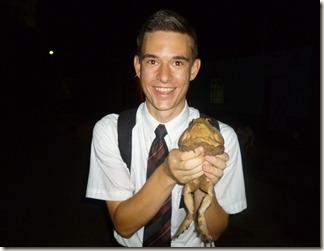 Another one that we have a dead date with is Deysi. She loves the church and wants to be baptized, but her husband kind of bailed on her at the last minute last time she was going to get married. So she is really bitter about it and doesn't want to get married because of what he did. She still has all of the clothes for her and their five kids ready, even, but now she just won't. Part of the problem is that he is willing to get married but just wants to go to the town hall and sign the paper. He doesn't want anything else. And he said he'll only do it so that she can get baptized. He doesn't want to marry her. Honestly he treats her kind of bad. But now she won't even agree to that since she is so bitter and doesn't want to marry him if he doesn't actually want to marry her. It's kind of weird, but we had a really cool lesson yesterday. It was one of those that started really lame, but then we just started talking about her and her needs and to make a long story short we had her give the closing prayer. It was a fantastic prayer, and she was in tears. And I think we're making progress. We still have a dead date with her for the 17 of December as well.

That's basically it for the most positive investigators. We really are looking for news because a lot are falling right now, but it's good. Elder Adams and I get along great, and it's really fun to go out and work. I love the area, too, even though the attendance is a little low and we don't have a very functional branch. It's awesome. And the other day we tried to make pupusas with Maria, an awesome member, but we didn't put enough beans and cheese in them, so they were basically just tortillas. Fail. That was really funny, though.

Also, just a heads-up, I think I may pull some money off the card you gave me today. I bought a hammock this month, and then I had to pay my $60 fine (yay for doing the right thing...), so I'm kind of broke already. My bad.

Thanks for the support and the emails. I've been loving reading about everything going on back home. Gosh, I miss Thanksgiving. They don't celebrate that here. I'll be hungry. Think of me while you're all gorging yourselves on delicious turkey.

I am so hungry right now.