Week 18 in the Mission Office

In which David drives us crazy by not sending an email until late in the day.  He was checking out the new mission area.  But you can read about that.  And we learn about the beauty of art.

And we got a couple new pictures!

First, I'll have to explain why I am writing so late. President gave us a last minute assignment yesterday: Scope out Santa Ana. I think I've mentioned this before, but our office and mission and everything are changing. It's kind of a big deal. President Cordon gets here in less than a month, and we have to be ready. So we went to Santa Ana today to see the new office, our new house, find the post office, lawyers, migration, etc. First, we got on a bus for an hour or so (it was what's called a special bus, which means it costs more but is way nicer and has air conditioning. They even play old Van Damm or Steven Segal movies from time to time. Rumor has it that they once showed a Chuck Norris movie. And I meant that in a non-Chuck Norris joke way). Then we went and found the new house. It looked really tiny from the outside, and it made me sad. We have to live there with the six of us (four in the office and the APs) and often have to house upwards of twenty missionaries who are coming in or leaving. Thus my sadness. And then we went inside, and it was huge. It was like two houses put together. We literally could not figure out what to do with half the rooms. And it has a backyard, which does not happen in this country. In fact, in the backyard is another two story mini house. And the halls and such all randomly open into these mini outside garden areas. I'm quite surprised. I even got lost in it, which may not be due to the size. I think the floor plan is really weird. There are random dead ends. But still, it's fun. 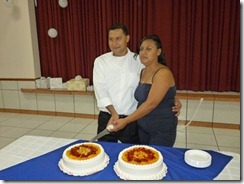 The office, as it turns out, is going to be inside the chapel in Paraíso. That means that it will be nice, but small. They were originally going to build it across the street, which would have meant it would be bigger, but they told us that if they did that there would be no bathroom in it. Strange architectural choice. But the office won't be finished until next week, so we won't actually move there until next Thursday.

We found the mail place, ran some more errands pertaining to different functions of the office, and then got on another special bus to go home. And here we are, super late. There goes P-Day. Dang it. We were going to go bowling. 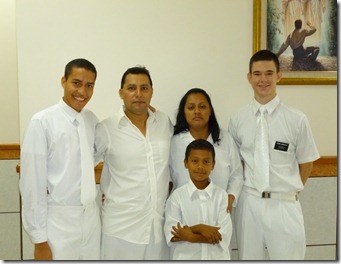 The actual week, though, was really strange. On Saturday, the Diaz family got married. Then we baptized them on Sunday. A couple hours later, in church, they got confirmed, and in priesthood meeting Rene got the Aaronic Priesthood. Oh, and he and Wendy wanted Jonathan, the little baby, to get a baby blessing, so they did that as well. Elder Gonzalez baptized and confirmed Rene, I baptized and confirmed Wendy, and Hno. Pastul baptized and confirmed Carlos, the son. And he did the baby blessing. It was a super cool experience to baptize a family. We have gone back to visit them only once since due to various factors, but they are studying the scriptures and want to learn as much as possible. Rene especially wanted to know what the priesthood exactly is and what his new responsibilities will be. This week they're going to get callings. Super cool. 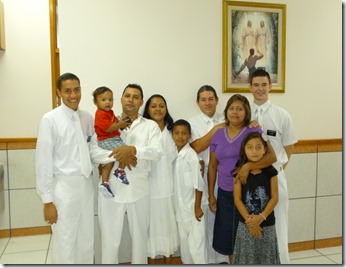 It is really hard to type this email because somebody has been playing a Backstreet Boys CD the entire time. Just so you know what I sacrifice for all of you.

Other than that, we haven't had much time to proselyte. The office has been completely crazy this week. Almost every day we've left after 6, and sometimes as late as 8:30. With half an hour or more to the area, that doesn't give you much. And mostly we've just been teaching the recent converts and members to try and get a good missionary spirit type thing for the other mission. I'm not going to lie, by the way. It's kind of hard to work in an area when you know that everything that you are doing will all be for another mission to reap. Nonetheless, we are doing our best. And eating a lot of pupusas while we're at it.

As for the goings-on at home, it sounds crazy. I can't remember a time when 20 people have been in our house. But I'm kind of really jealous as well. I'd imagine you've had some crazy times there. Like a Mario Kart bracket. That's just genius. And Dad, I want you to know that I am equally upset about what that coach said, and that he is putting Steven at center. Honestly, following Steven's baseball has been really fun. It'll at least tie me over until football season. 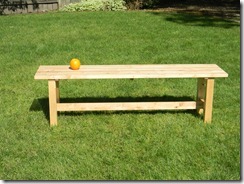 The orange cracked me up. Especially with the very artistic orange-on-the-bench picture. But I'm wondering, is that me sitting by myself on the bench? Why am I by myself? I like to imagine that, instead of sitting on the bench, I'm laying down for a nap on top of it. Or maybe standing on it pretending to trek adventurously across vast wildernesses. I guess that's up to the interpretation of the onlooker. That's the beauty of art.

Alright, my time is a-slippin’ away. And can I just tell you all that Elder Oliverson is great? That's random, and you're all great, too, but it's so so nice to have someone here who will willingly finish the quote: "Kathleen! You...are a lone reed." I think I would go insane otherwise. Movie quotes. They're great.