Week 19 in the Mission Office

It appears the move to the new city (Santa Ana) is complete, and the situation is quite positive!  I think he likes it.  And then there’s this soccer game against the other mission.  Who, really is the better mission?  And who will play goalie?  They must win at all costs!

Subject:  Janet, don't make me crawl around you. This sand is too hot! [Even I know that quote]

I have a few comments about your emails that I want to make, first. So here we go. I kind of had one of those oh-my-gosh-I-can't-believe-that-all-is-happening moments while reading your emails. Michael graduated. Steven graduated (It's not a graduation! He's moving from the fourth grade to the fifth grade). And he's starting high school sports. Michael is fixing my car (thanks, by the way). And so forth. Crazy. The graduation sounded awesome, and I wish I could have been there. So congratulations, man. And the baseball games get more and more intense every time. I love it. Also, just so you know, it cracks me up that Sarah went with you to the one game. And the confusedness that I can imagine ensued. She is quite brilliant, as you all surmised apparently from her talk (and her 3.9 GPA), but I don't think that she is that into baseball.

Julie and Dave! Congratulations as well on finally getting out of Ohio. I'm pretty excited to come back home with you all living 5 hours south. Medford IS south, right? The move sounds stressful, but I'll talk about that in a little bit.

Stacey and Kyle, congratulations on graduating as well. And the new iPad. We were trying to kind of hint to President Lopez that he should get us some, but he said no. Too bad. Also, it's good to hear that you're getting into some missionary work as well.

Now. I apologize for the complete lack of investigators stories, but I have none right now. The week was too crazy. But, interestingly enough, I think I have three baptisms later tonight in my ward (Independencia, part of the Modelo stake). Huh. I've never even met them. But I think I can still count them, since it IS my area (and only my area; there's only one set of missionaries here now). And word on the street is that we have two more next week. I should really go say hi to them at least.

However, there was still some good progress. We went to say goodbye to the Diaz family, and it was super hard. They were crying. That's a really awesome feeling, by the way. Having the family you taught and baptized cry when you leave. I love it. But, with luck, they'll get sealed in a little less than a year, and I'll be able to come to it!

I loved hearing about the Te-somethings that got baptized and their progress in the ward, but I have to one-up you here. In the meeting with the new missionaries that we had in Santa Ana, I got a little surprise. Remember Herson Castro, from Atiquizaya? (My second baptism, in October I think). He has been working on his missionary papers for a while, and almost has them ready to put in. In the meantime, he's been called as a mini-missionary in our mission! He's being trained by two very good Elders I know (In a trio), and is currently serving in Centro, Molino (very close to my zone, but still a different one). Now how cool is that?!? My convert is a missionary! In my same mission! I'm still freaking out about it.

Okay. More than that, there wasn't too much eventfulness that happened. But I have a couple more stories. Before leaving Monserrat, we had to fill the pila [Dave Frogley translates this as “baptismal font among other things”] for a baptism of the other ward. While we were there, the bishop asked us to go pick up 40 pupusas for an activity. So we went to the pupusaria just above our house and ordered them. While we were waiting, some twenty-something guy came up demanding pupusas, and for reasons I won't go into got into a fight with the owner of the pupusaria. This is happening less than a foot in front of me, by the way. So the guy starts pushing the owner, so he reaches behind the desk and pulls out a machete in a sheath, and starts chasing down the guy. He calmed down and came back, but the other guy came back to argue again. The owner then unsheathed the machete and chased after him, literally shouting "I'm going to kill you!". I definitely saw him connect once with the guy's back before Elder Gonzalez and I booked it out of there (we can't be witnesses to crimes, and it was a tiny bit dangerous...). After ten minutes or so, we came back to get the pupusas. By then, everything was calm. Cool story, Hansel.

So Julie. I feel your pain about moving. I have spent the last four days packing up my house, packing up the entire office, moving to Santa Ana, unpacking all of it, looking for a new address, letting the 200 or so missionaries and their families know about it (you'll get that, by the way), finding new banks, worrying about the stuff that we are loading into trucks, finding out that some of my stuff got broken when other people were moving it, etc. etc. Moving is not fun at all. And it's super tiring. But satisfying. The new house in Santa Ana, like I said before, is awesome. I'll send some pictures next week of it all. The new office is now basically complete. We moved most of the stuff in, and it was awesome. The office is actually part of the Paraìso chapel, and is much much bigger than we thought it would be. It has a ton of perks, such as a mail room, automated gates, a security system with cameras and such, a way better desk, better interaction with the rest of the office, etc. By the way, I get the security system and such. It's mine. I love my job. I hope this power stops going to my head. 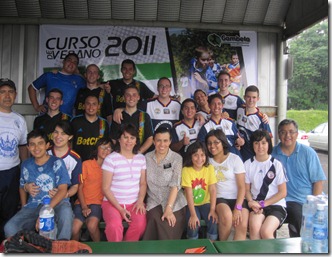 There was probably a lot of things that I forgot to mention in all of this since the week was so dang full. But I have to finish up, so I'll just let you all know what happened today. We came back from Santa Ana to San Salvador, where I'm writing now, because President Lopez set up a soccer game against the office of the east mission. So the six of us in the office played against the six in their office. It was quite the heated game. President Perez, the other president, also came, and both presidents played with us. That was a ton of fun. And then we ate at this really nice restaurant together, the two offices and the presidents and their families. But here's the play-by-play, as closely as I can remember it.

So I actually played really well. The problem was, that nobody on my team was very good at goalie. I'm actually pretty good, somehow, so I got unanimously voted to be there. I did very well, and blocked a lot of shots, but let two in. The score was 4-2, with us up, so I switched out with one of the other Elders. In the ten-ish minutes that I was out of the goal, they scored three. That's why I was in the goal, I guess. But, in that time, I also scored one and had a really awesome assist. But they threw me back in the goal. Actually, one of the goals that they scored was right after the kick-off and a really bad move on my part, so President Lopez told me to get back in the goal. It actually made me laugh. Even on the soccer field he's the President. I was there most of the time, until after half time when we were up 8-6 (I had let one more in). Then I just went out and had fun with it. We ended up beating them 10-9, but the last goal they scored was after the time we had agreed on, so really it was 10-8. Super fun. And satisfying to win. But after this week, and then a really long, fun soccer game, I'm beat.

Thanks again for the emails and all the support that you give me. I really love knowing more or less what is going on at home. Hey, that's fun. Next time I write I will have more than a year in the mission. That did pass fast. And slow, but fast.

[Follow up in another email] Ha! I was going to tell you as well (save this until after you read the email) that President had been planning this soccer game with us and the East mission with us at the new people's meeting (while other people were presenting. I forgot to tell that, by the way. We got the new missionaries in Santa Ana for the first time. It was super crazy, but good. My presentation was good. And the entire thing was stressful, but successful. I think I will coin that phrase. "Copyright that name! I want a quarter every time somebody says it!") But he was telling us that he was a little worried because half of our team would be gringos. That made me laugh. He just kept telling us that we could not lose. We had to win. He even told the assistants, "You six of the office have permission to go. But find out if the East mission is going to bring more players. If they are, then find the best players that we have in the mission and they have permission to go, too." President cracks me up sometimes.