Week 21 in the Mission Office

And what a week it was!  First, we almost got on a plane to go down there because we heard nothing from him on Friday.  Apparently he was too busy for PDay?  What’s that about?

Then we hear what it’s about.  Talk about long hours and hard work!

I'm pretty sure that's a movie quote. Mostly I just felt it was appropriate, given the lateness of this email.

My P-Day got moved this week, which I will explain in a little bit. So sorry for not letting you know. But I didn't even know until like two days ago. So here I am with a Saturday P-Day.
The past week has been by far the most busy week of office work I've ever even heard of missionaries doing. It was rough. All of it is revolving around the mission president change, which happens on Tuesday. Things are nuts.

So last Friday, after writing, I went to go eat with the zone, as we always do (on normal P-Days). Then we got the phone call of death from President Lopez telling us that one of the area presidency, Elder Martillo, was going to stop by the office and the house to inspect them, so they had to be cleaned. That's usually a several hour process, but when the office looks like what it looks like in the pictures 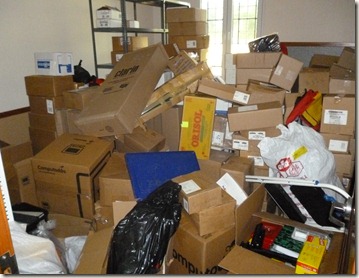 I just uploaded, it's a whole lot more intimidating. We spent upwards of nine hours unpacking and cleaning in there. We didn't leave until after ten. And then we got home, and guess what we found out? The assistants, who conveniently couldn't show up to the office to help ("We have a couple appointments...") had done nothing more than organize their own desks. And keep in mind that the house looked almost as bad as the office, because all of the extra stuff from the old office got moved there. So we spent a few more hours cleaning and unpacking. At about one in the morning we literally just gave up and decided that it would be better to tell Elder Martillo to his face that we just couldn't get it done in time. That's how tired we were. I have never ever been so tired. At least definitely not in the mission. And that's saying 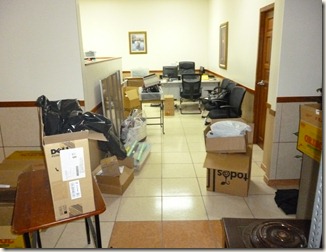 something. So we went to bed, and then had to get up at four to get ready and leave to work in the office some more by five.

We ended up getting a few blessings for that, I guess. Elder Martillo decided that he didn't have enough time to see them all, so he wanted to do it Sunday instead. So a lot of the day Saturday was spent working on that some more, but we did get out to see some of our investigators. I can't honestly remember who. Probably William. Or that might have been Sunday.

Sunday we had to get up around five to leave and invite people to church. We had very little success in that regard. We got to church and greeted the bishop, who asked me to play prelude. Then he asked me if I knew that my companion had been asked to give a talk. I didn't but I figured it would be funny watching him scramble for it, since he didn't know either. After playing prelude, the meeting started and Elder Gonzalez leaned over to me to let me know that, at the last minute, the bishop had decided to have us both speak. And I was the first speaker. 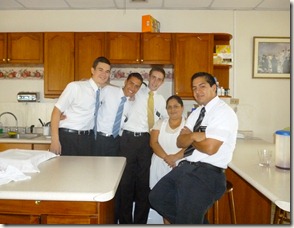 ...Shoot. So I had about two hymns to prepare. I literally just wrote down a couple scripture references and a couple keywords to remember some stories and experiences, and then got up to talk. It was an amazing experience, though. The talk came out very well. Surprisingly so. And my Spanish seemed a little smoother than normal. That was obviously the spirit giving me a little boost. I remember that I started with a story (actually talking about Naham and Elijah or Elias or whatever Elaias is in English) and was going to talk about one thing, but when I started to say it it kind of got changed, and suddenly I was talking about something completely different. And something I hadn't meant to say. But it guided my talk into something good, I think. My companion also did a very good job, by the way, although he did have two speakers before him. So it was kind of cool.

We went home after church and literally slept for the entire lunch hour. We were super exhausted. Then we got up and went to visit some more members, less actives, and investigators. Again, I don't completely remember who. Sorry. It's been a long week. 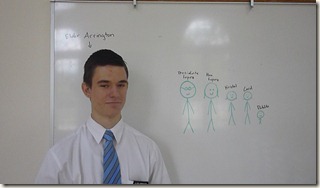 Fortunately, by the way, we'll still be very close to President for the next couple days. And then President Cordon gets here. 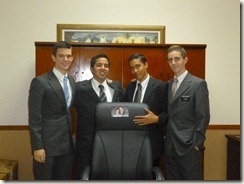 You may notice, by the way, that in a couple of the pictures I'm uploading I am wearing a new suit. Where did I get said suit, you ask? Fun story. So President is super worried about leaving everything perfect for President Cordon, so he basically said to Elder Guevara, one of the APs, that he was going to buy him a new suit. The one he had was this ugly greenish and kind of worn out, so he needed it. And he couldn't just buy one for one of the APs, so he got one for Elder Hosman, too. Elder Huaman, the financial secretary, was kind of the one paying for it, so he found out. Through various butterins-up, he got us in on the deal. And it was crazy. We were sitting in the office working late one of the nights, and he got a call from President. The call was basically this: "So, I was talking this suit matter over with my wife, and I've decided to buy you one as well. And tell Elder Oliverson, 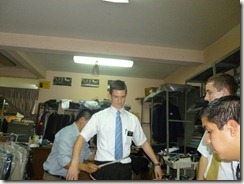 Arrington, and Gonzalez that I'll get them one, too. Just make sure that you get it done before Tuesday." Elder Huaman was just sitting there on the phone with his mouth hanging open. Very unexpected. But that meant that we had to go down to San Salvador again to get measured and pick out the fabric (these are very tailored suits. President goes there for his suits, so you know it's classy). Then we had to go down again for the secondary measuring or something. All in all, I am quite content right now. Not many people can say that their mission president bought them a suit before he left. And a hand tailored one at that.

I forgot to mention it, but we also worked all day yesterday until about ten thirty. Then today we were in the office until about five thirty. And here we are, writing. I wish I still had P-Day in the mission. I haven't had a normal one in months, I think. 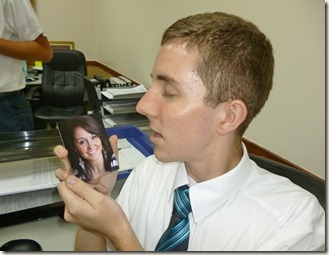 Also, for all of you keeping score, I think that may make a total of six days working in my area. Maybe a little more. But we're three weeks into changes already.

Not that I'm complaining, by the way. I love working in the office, and I'm learning a ton here. It's incredible to be so close to President Lopez and his family. Very cool.

Speaking of cool things, I heard Steven is doing some very cool things with sports now a days. Three sports is usually pretty hard to do, but he's doing them all at the same time? I don't think I could handle that. However, I've decided that he can be the little brother that ends up playing for the Jets or something. I'd be okay with that. "Wait, you're the brother of that one guy who just got drafted to some team?" "Why yes, I am." That's me.

I loved the play by plays, by the way. The games are intense. You'd better keep it up, kid, so I can go to your high-school games next year.

Michael, I hear, is risking his job to have a fling. That's my boy. I would've done the same thing. I guess I've been raising him right :) Let me know how the high adventure goes.
Wow. I just had one of those moments where I realized that it's the middle of summer there. Here the weather hasn't changed for nine-ish months, so I haven't even noticed. I still feel like it's the beginning of March or something. Crazy how time passes.

Thanks again for all of the emails and the support. I've been loving the work out here, so rest assured that I'm getting as much out of it as possible.