Week 17 in the Mission Office

David receives his package and is mildly pleased with the contents.  Ok, a little more than mildly…  Oh, and we got a ton of new pictures, I think mostly from other missionaries’ cameras, and including a trip to some Aztec or Mayan ruins.

Wow. What a week. First of all, I don't think that I've ever gotten a package quite as exciting as that. I picked it up on Thursday, or I guess it would be yesterday. And it was good. I have to say that I had been wondering for a long time what could possibly be in those boxes of Ocean Spray, since both Mom and Dad mentioned that there were little prizes in them. I figured it would be some little laughable thing. But I was wrong, wasn't I? 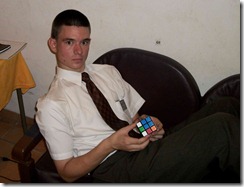 I opened it in the office, and as Elder Oliverson can probably confirm, I freaked out. It was a great moment. Especially when I turned it on and found out how awesome it is. Good times.

The package also is probably number one as well due to the socks and belt, both of which I really needed. But I think, aside from the IPOD TOUCH NANO that you sent, one of the things that made the package great was the incredible variety of stuff that was in it. You kind of learn as a missionary that it's not the quality of items that counts, but the quantity of different things. It just gives me a happy I-don't-know-where-to-start feeling. So thank you very much for the package. 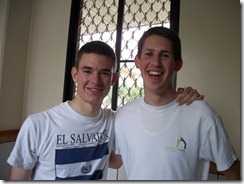 Okay, so I definitely wanted to remember to tell you what I am currently uploading to the server. It's a compressed version of the Elder Holland talk I mentioned earlier. It's not the quality that it is on the DVD I have, but it's not terrible. Also, assuming that finishes before I leave, which I'm not sure it will (it's only 100MB, but the internet is running a little bit slower than normal here), I'm also uploading a document that I wrote describing my responsibilities as the General Secretary (for the new President). I mostly wanted to send it so that you can all see that I did, in fact, write a twelve page document in Spanish. Yeah, I'm awesome. 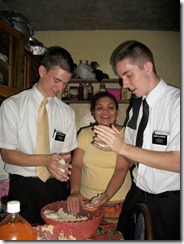 But this week was crazy. We've been running most of the week to try and get the paperwork ready for the Diaz family to get married, which has been ridiculous. We had a couple appointments with some other investigators, but really it hasn't been moving much with them. We tried to have a family night with the Merino family at the Bishop's house, but they bailed on us at the last minute. Other than that, we really haven't had much time to work in our area. But the Diaz family should be all set for their wedding tomorrow, and their baptism Sunday morning. Good times. 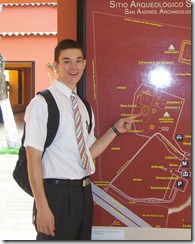 We had a ward activity on Tuesday that Elder Gonzalez and I were in charge of, and it ended up working really well. The only problem was that as we were leaving the office President called us and had a ton of stuff for us to do before he left for Belize on Wednesday. So we had to go back in and work for a few more hours 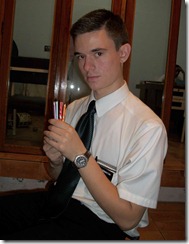 and were about an hour late to our own activity. Elder Stone and Elder Zepeda ran it for us, though. We watched this blue vase video that I might send you sometime, which is really good, and Elder Gonzalez and I got there about as it was ending. Then we played musical chairs and a couple other games that were really fun, and even the older members were getting involved and having a great time. 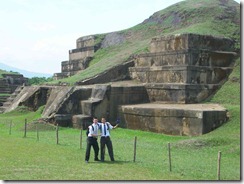 Hermano Pastul is awesome, by the way. He played all of the games and got super into them. It was really entertaining to watch him knocking over little eight year olds to get in the seat before them in musical chairs. And when he lost in the final three he fell backward and just kind of rolled on the ground for a minute. It was quite hilarious.

The house that I used to live in in Campestre, the big office one, is being vacated so that we can give it back to the lady that owns it and I think she's going to re 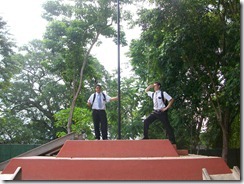 nt it to someone else or something. But she went to review the house a few days ago and was very unpleasant. She basically demanded that we repaint it, repair all damages, fix up everything until it's perfect, etc. at our own expense. After ten years of missionaries living there, you can imagine the work that we'd need to do. But, since we're the church, we told her we would be happy to do exactly what is stated in the contract. As it turns out, though, she conveniently "lost" the contract. So we had a mission yesterday: find our copy. I was busy out doing my own work with the post office and distribution center and such, but when I got back they still hadn't found it. We had all basically given up, but Elder Oliverson kept at it for another three hours looking through literally every paper in the office. In the very last 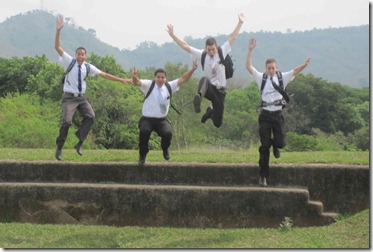 box in the back (not just the last one he looked in, the last one in the office) he found it. As it turns out, that lady had good reason to hide her copy. First of all, the contract says that we should leave the house in very good condition when we leave. But it also says that we paid an $800 deposit when we moved in that would be reimbursed to pay for the repairs, with any extra money going to us. Also, we've been paying an extra $40 a month for the house for the last three-ish years than it says in the contract. Nobody even noticed. So we'd get that reimbursed, which is a solid $1080. That's almost $2000 dollars that we could use for the repairs. But the best part we didn't find out until today. The repairs would cost way more than $2000. But the contract isn't valid. It was supposed to be renewed annually since we moved in, and it wasn't. Which means that we are not obligated to do anything. 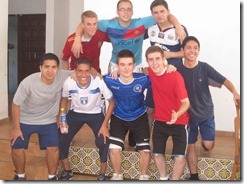 At all. So President is basically going to tell this lady that she can keep the $2000 she owes us from ripping us off and we'll leave it all to her to fix up. All because Elder Oliverson found the dang contract. He's my hero.

Sorry, that was a long story that took up way too much time, but it just happened yesterday so we're all still stoked about it. I love it when contracts save us a ton of money. Also, we saved a ton of money on car insurance by switching to Geico.

Alright, I have to go. I love you all and hope you're doing well. I got a couple invitations from Michael also, and that was fun, so congrats on graduating and getting your eagle! Good stuff.