Week 14 in the Mission Office

This week we get some pictures!  A few anyway.

David has apparently moved into a new house closer to his actual work area.  That means that to get to the office, they need to ride the bus.

I also got a “friend” request on Facebook from someone in El Salvador.  I thought it was meant for David, so I forwarded it to him (although he doesn’t do facebook).  It turned out that it was for me!  Read the email dialog I had with David at the end of this post.

We’re also preparing for his Mother’s day call in a couple days!

Subject:  “To think you saved that baby from a runaway horse.”

Elder Oliverson is scratching his head over what that’s from. Wait, he just got it. 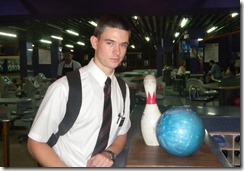 So I had some interesting times this week. We moved to a new house that is actually in our area, but is super tiny. I haven’t taken any pictures of it yet, but I’ll get on that pretty soon. I kind of enjoy living there, even though there’s four of us that have to be in different rooms to have any breathing space. We’ve been ironing our shirts on my comp’s bed because there’s no room anywhere else. But it’s super easy to find lost stuff, and I never have to wonder where my comp is. The best part about it, though, is that it is in our area. I forgot what it was like to be able to work 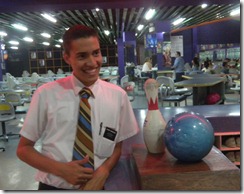 past eight, but now we get to be out until almost 9:30. We now have to take two buses to get to the office in the morning, though. And one to get back after the office, but we always had to do that. So really the commuting time just got moved up to the morning before the office instead of at night.

With that time that we now have to proselyte, we have been working hard. It’s been a little rough to find new investigators lately, so we’ve really focused on that. We have a goal to baptize seven before leaving to Santa Ana, and we definitely could if we work hard. The Diaz family is progressing really well. We talked about tithing with them, which is always a difficult lesson, but Rene, the husband, really accepted it well. Wendy wasn’t there for the lesson, but her testimony is already awesome, so I don’t worry about that. It was a great lesson, and we were really focusing on him and his relationship with his kids, and relating it to our relationship with God. And then that to tithing. Focusing on the people and their needs and their lives really invites the spirit and makes the lessons so much more effective. Now that is the kind of stuff they should be teaching in the MTC. They are. No kidding?

I forgot to mention as well that they have one single solitary problem. They have to get married, which they want to do, and we have all the paperwork ready, but they don’t want it to be just a little marriage thing. They want a full on lunch with their respective families and such, so really it just turns into a financial issue. But we’re going to work with the ward to get that put together, and dunk them in a couple weeks.

So that’s three. Then there’s Ana, who is a little difficult to teach because of her crazy son, but we had a bit of a breakthrough lately. We noticed that if we teach her really small principles, it sticks better. But more than that, we noticed that we can teach Daniel when he gets crazy. So when he starts to disrupt the lesson at all, we just bring it down to his level to keep him involved, like a primary lesson, and Ana is learning through that as well. She has a desire to be better and really just be a part of the church, so we should be able to dunk her this month as well. Four. 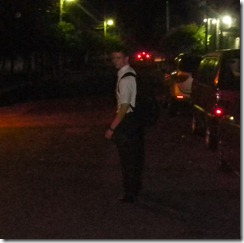 The last three will be a little bit tougher. We have the Merino family, which is kind of positive. The husband has met with the missionaries before but moved before he could get baptized. He teaches Tae Kwon Do in the park, so his schedule is a little bit rough and it’s hard to find them at home. If we can teach him, I think he’ll get baptized. His wife is less enthusiastic about the church, but generally women are more receptive, so hopefully she’ll be able to feel the spirit in the lessons and get baptized, too. Five, six.

The last one I think we just found yesterday. We were out walking to an appointment, and a member called us to tell us that she had a friend waiting to talk to us right then. So we changed our plans and headed over there. It was a man named Mario who is about 30. He has had some rough times lately. His dad started drinking a lot, his girlfriend of three years dumped him, things like that. At first we tried teaching him normally about Joseph Smith and such, and it just didn’t work. He kept just trying to talk to us about his problems. So guess what we did? We focused on him. Revolutionary. We really tried to explain to him how the church and the spirit and all these things can help him overcome his issues, and it really worked a lot better. He even told us that he’d been looking for the kind of help and support and spirituality that we’d been explaining from other churches, but just felt like something was missing there. Sounds pretty positive to me. We’re meeting again tomorrow to see if he prayed. I’ll bet he did. So there it is. With a little faith and a lot of work, we’ll get seven.

On your end, things have been very news-ish. I heard about the Osama thing here, and was kind of happy about it, but to be honest it didn’t really change anything for me. I think Dad said it best when he said, "So, in other news, Osama Bin Laden is dead. And American Idol is down to the final four." Awesome. And it might rain today.

Mom, I quite enjoyed the pictures you sent, which came perfectly. I never realized, by the way, that Steven is getting so ripped. It makes me feel bad. Good work, though, kid.

Before I forget, I talked to my comp. He and I worked out that about 6 or 6:30 would work really well to make phone calls on Sunday. I will only be using a phone, not Skype, and I have no idea what time that would be your time. 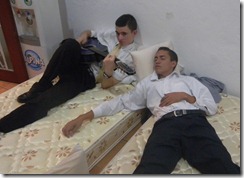 Daylight savings makes things all wierd. But I figure the best thing would be to buy a calling card or something from here, and then talk to the house first. Then I could, after a little bit, call the conference number and talk to everyone. So that’s my plan. If anything changes, I’ll let you know somehow. Wow. That’s this weekend, isn’t it?

Yesterday I was on a bus, and it got hit by another bus. That was fun. It wasn’t so much a collision, though, as it was just a scraping along the side. It reminded me a lot of that part on Galaxy Quest. I also ate more pupusas, which I do enjoy a lot. Just so you all know. And now there’s a couple pupusarìas near my house.

So it’s about time to wrap this all up. I love you all, and enjoyed hearing about all the good stuff going on. Also, congratulations to Emily on the whole baby girl thing!

David: Ha ha I love that guy. He’s the brother-in-law of the Diaz family, and a lot of times we teach them in his house. He and his wife also usually take Carlos to church, which is why he already wants to get baptized. He’s great.

But in case you haven’t already run that through a google translator, it says this: "Thank you for lending us Elder Arrington. We have him in our ward, and every once in a while in our house. He’s a great missionary, working hard every day..." Something like that.

David:  Did you not even try to translate it?

David: Ha ha it’s really weird to me that people can’t all understand Spanish. Did you ever feel that way with French? It’s fun being bilingual.