A new month and a new planner!  The weeks continue to roll on and we’re now just outside of 5 months remaining.  This week’s news?  Michael is getting a new companion, who happens to be freshly released from being an assistant to the President.  Interesting choice.  And this week’s letter comes with a genuine Malagasy recipe!

Subject:  "It's a highly efficient language. You can fit a whole book on a napkin!"

Today signifies the bright new beginning of a new planner! How exciting. That planner represents the first of my last three or four planners EVER. That's weird. It also means that we just got transfer news yesterday.

As I may have mentioned before, there are three areas in Madagascar that are considered the "best areas". Mahajanga, Fort Dauphin, and Toliara. Once a missionary goes to one of those, he is off limits for going to another. It's kind of the unspoken rule. However, transfers came in, and guess who is moving from Mahajanga to Fort Dauphin? MY COMPANION. 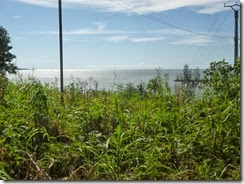 The lucky little punk is bouncing down there, probably for the next six months (his mission ends at the same time as mine). He should have an awesome time.

I, on the other hand, am staying in the other "best area", Mahajanga. My new companion is to be Elder Marsh, who will be leaving the throne of AP to end his mission in Mahajanga. It's kind of weird to think that this companion actually may have had some say in picking me as his next companion. I guess that's one of those, "a second to decide, a lifetime to regret" kind of decisions.

Just kidding. I've met Elder Marsh before and heard a little bit about him, and we should have an awesome time. He's like a seven foot tall redneck. What could be better than that? 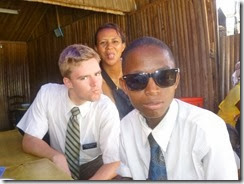 But enough about transfers. Our teaching this week has been going pretty well, with a couple people in particular.

Frank had also suggested that he might come to church yesterday, but didn't. That made us pretty sad. But that's life. We might send a member to hunt him down this next week.

Justin is still doing pretty well, and arguing less. Honestly, most of his arguments are pretty reasonable, like when he asked about God having a body when John 4:24 says that he is a spirit. We answered that as well as we could, and then told him that it, once again, hinges on the Book of Mormon. I probably say that like four times every time we teach him. 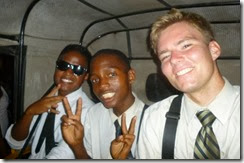 Justin was supposed to come to church this week, but didn't. I'm sure he has a good reason, especially since he didn't even hesitate to come the first time. But still. Come to church.

While those investigators didn't come to church, many others did. Sixteen others, to be exact. Much of that comes from all the primary kids that we teach, who are officially counted as investigators, but there were a few others as well.

Jean and Clementine, for example, came. Which is really good since they'll be getting baptized this Saturday. I haven't talked about them much. Jean used to be Muslim and wasn't that interested in the church until recently, although Clementine has been trying to get baptized for a year or so. Her only problem was not being officially married. But now that's all out of the way, Jean is on fire and doing his best to be like Jesus, so that's that. 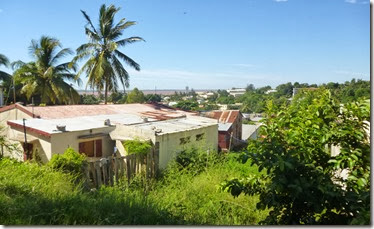 A young man named Pascall will also be getting baptized this Saturday, so that's good. He was almost dunked before, but was drinking coffee. He has now passed the roadblock, and in the clear.

We teach this lady named Mémé, who I call Mad Madam Mim. She also has been trying to get baptized for a while but can't because her marriage isn't finished. Yesterday she asked us why unmarried "husbands and wives" can't get baptized but unmarried people that date can. We explained, and she understood. Mémé has a great sense of humor, and laughs a lot. She would be a good member.

I was thinking about whining for a few paragraphs about how ineffective our branch councils are (and I do in letters to mission president), but suffice it to say that it took an 18 year old young men's leader to tell all the older people, including the branch president, "you are all just complaining about the problem and wasting all our time. Just start look for solutions." I couldn't have said it better myself. That being said, the leaders still managed to end the hour long branch council with almost nothing to show for it. 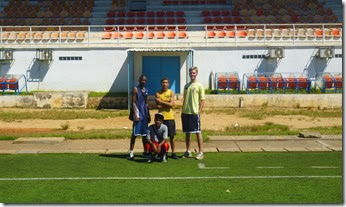 That being said, there are a couple of good members here. Gaetan, the 18 year old that spoke up in branch council, is a good one. He is also the branch Family History consultant, and just a diligent guy. His brother, Gerard, is also super good. Gerard just got back from his own mission and is way solid as a leader and in his efforts to straighten out things in the branch that are not okay. Both of those brothers are really good at English, by the way.

The problem is that both Gaetan and Gerard will be moving soon, due to their mother's work. She is also a good member, but hasn't been coming to church because of her job. She has an actual job working at a grocery store, so the family's income is pretty solid, but she should come to church.

On that note, just coming to church does not define a good member. On our way to church yesterday Elder Rakotonjanahary and I bumped into a member lady walking in the opposite direction. We asked her where she was going and her response was, "oh don't worry. I'm just going to stop by the market really quick and I'll be at the church soon." And I was like, "oh good. Breaking the Sabbath ON YOUR WAY TO CHURCH. That's a new one."

The members just don't understand a lot of things about the Sabbath day and the way the church runs. But enough of that. Things will improve.

President has also suggested that my new companion, Elder Marsh, should be a good help in kicking the branch council and leaders up a step. I'm sure he'll be great.

That pretty much concludes what I have to say this week. I hope you are all enjoying life in America. It has been mentioned that people here look pretty poor. Living and working with them kind of makes you more grateful for the "necessities" that you used to have. Things like a bed for each individual, couches, a kitchen table. A kitchen. But the people make do with what they have.

PS: I've been watching some of the people that pull pouse-pouses for a living. I'm convinced that those guys would have been fantastic pioneers, because can they run all day pulling their load like a handcart, and half the time they aren't even winded when they get to their destination. The only problem is that their pioneer wagon would be full of straight up RICE. The average Malagasy eats somewhere around two-thirds to a full pound of rice each day (measured before it is cooked). Can you imagine carrying that bucket of all your belongings (15 lbs?) AND a hundred pounds or so of rice PER PERSON?

PPS: I had Elder Rakotonjanahary teach my how to make some Malagasy rice and laoka, and I realized that the laoka that we made was basically chili. So if anybody wants to try a Malagasy dinner, here's a quick recipe:

- Cook a bunch of rice.
- Microwave some chili.
- Mix the two and enjoy!

PPPS: Lindsay, thanks for the email! It's good to know you're still alive!