Michael’s experience with missionary work continues to strengthen.  His testimony is clearly growing.  And he’s having fun, too!  As a side note, his brother David (formerly a participant in this very blog) got engaged last Friday, hence the comments.

Subject:  "Oh, not you Roxanne! I was just yelling at my mother's urn."

Just a usual week, nothing super new or grand or surprising...

And then I open an email from dad to see a picture of David on one knee? Holding a ring? In front of a chick? How did that happen?

So my brother is officially engaged now. That's a weird feeling. But way to go David. Good job.

(PS: I've heard that this is "Facebook legit", so I guessed there would be no harm in me commenting on it.)

But all of you probably already knew that days ago. 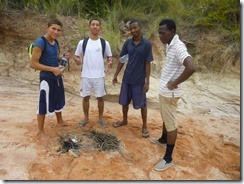 As for me, life has been much of the same. Teaching, preaching, and all that good stuff. Elder Marsh and I have also torn up Mahajanga this last week with our contacting efforts, and it's starting to pay off. Maybe ten percent of the people that we contacted are going to progress, but that's still some progress. Progress is good.

Mahajanga is actually kicking up a gear in several different areas. We found a less active family that the branch had been contacting for a while, and visited them. Jean Baptiste and his wife came to church yesterday. They left early, but it's a start. We'll keep visiting them, and try to help the branch do a good job of accepting them back into activity.

Sandy, who some of you may remember to be a less active recent convert, previously Jehovah's Witness. We've been visiting him, and it seems that he is still searching for the truth, and even stopped by institute class recently. As long as he continues that search, he should find the truth. We'll be focusing on the Book of Mormon and prayer with him. 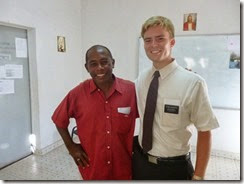 Which is exactly what we did with Justin. Justin is that super diligent guy. He reads everything we can throw at him (so far, most of the Book of Mormon, a priesthood ordinances manual, and now he's tearing through Gospel Principles, all in less than a month), but we were afraid for a while that he would end up as a "facts convert".

Justin straight up bore testimony that the Book of Mormon is true. He said that he feels happier when he reads it, studies the books 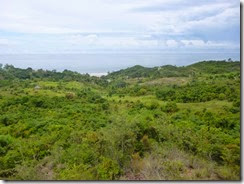 that we've given him, and when he learns from us missionaries. Even when he just talks to us outside of our lessons, he feels that there is something different about us. Because of this, Justin has been asking us about how he can apply this new faith that he has, which is perfect. We were planning to baptize him on April 12th, but he just recently left of town and won't be back until Juin, [Juin: French word for June] probably after I leave Mahajanga (dang it!). But we'll make sure the missionaries later on dunk him. Justin is an awesome person.

There's this new guy that we found named Tsadidy. He comes from Toliara, and has the coolest accent ever. It's actually kind of hard for us to communicate with him sometimes, since he mainly speaks Vezo (a dialect from Toliara), which is fairly different from Merina (the official dialect of Malagasy that every person in Madagascar is supposed to know). We're trying to learn a little bit of Vezo so that we can communicate clearly with Tsadidy, but honestly, there's a lot to learn and almost nothing to learn it from (such as books).

Fortunately, we've been blessed with one very diligent recent convert, Ulrich, who actually comes from Toliara, and so is able to clarify any misunderstandings. 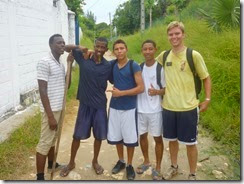 Ulrich apparently speaks almost all of the Malagasy dialects (there's somewhere around 20) as well as French, and is getting pretty darn good at English. He's a stud.

But back to Tsadidy. My companion has this thing where he'll always ask a new investigator, on the first visit, who God is to them. What they understand about Him, things like that. Tsadidy just said, "I don't know that." We asked about Jesus Christ. Same answer. So we are given pretty much a blank religious slate to work with. We'll see where this goes.

One last note about Vezo people is that they are not very well educated. Tsadidy is huge (like, the size of Bane from that one movie), but he has the mind and innocence of a child. He's a way nice guy, and we love teaching him.

Pascal, Jean and Clementine are all continuing on the recent converts path very well. No signs of them going inactive any time soon. 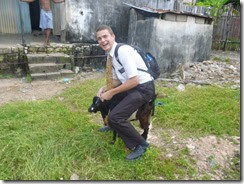 While toiling out in the hot sun, Elder Marsh found time to grab a goat and pretend to ride it. Elder Marsh, aside from being tall beyond reason, used to do some pretty serious bull riding before his mission.

The poor little goat would never have stood a chance.

For our P-day today we went to the beach with a bunch of the young men from the branch. We had brought some meat for a reason, and the young men got a fire going, and then cooked and ate the meat. Apparently it tasted less than stellar?

I had already been to that beach before, but it was new for Elder Marsh. And I got a picture of Ulrich jumping over me, so that was a day well spent. 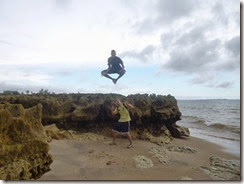 And I threw in a picture of me with Justin. My companion was smart enough to suggest that we take pictures a couple lessons ago, just in case Justin had to leave suddenly. And he did.

That's pretty much all I can say about this week. Stay happy everybody!