Things moving forward in Mahajunga!  Almost as an afterthought, we have baptisms!

I have now gotten my fifth American companion (if you include the MTC). 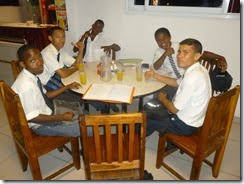 Elder Marsh is about as American bred as they come, wears cowboy boots around the house and talks with this super redneck accent. It's awesome.

Honestly though, I'm finding it hard to communicate with him, because I can never remember how to say things in English. So I'll get his attention and say something like, "hey, could you pass me that...what is that called........ that one thing........" and I just leave him hanging there since I can't remember the English word for pen or something. I'm sure he's been enjoying that.

So we've been rocking things up here in Mahajanga. He also refuses to let anything in our house work less than perfectly, so we'll be spending most of today tearing things apart in efforts to fix them (the washer, the sink, and basically painting the house with bleach. Gotta keep these things clean!)

And that's how he chooses to spend the first of his last five P-days.
Which reminds me, Dad asked about the odds of there being another transfer coming my way soon. Elder Marsh will be going home at the next transfer, so I'm guaranteed a new companion. There's also the possibility of Mahajanga getting white-washed, but we'll see how that all works out in a couple weeks. Elder Marsh has also been helping us straighten out the branch, particularly in their meetings. They've had some rather ineffective (useless) branch council meetings, but this last one was really good. The branch president followed the agenda that was made for him, and some decisions and assignments got made. It was by no means perfect, but much improved.

We also had thirteen investigators at church yesterday, including Edmond and his family (his wife Nirine is in Tana, but everyone else came). Edmond, the Croc Hunter, has been a really good investigator, pretty diligent in reading, and finally came to church for the first time. That sets a clear horizon for their baptism on April 12!

Justin also came to sacrament meeting, on time, but had to leave right after that to help his wife with some work. He keeps begging us for a Doctrine and Covenants, but we simply don't have any to give him. We tried to send some up with Elder Marsh, but that didn't happen because of some communication error. No biggy. Until then we are trying to stuff Justin's appetite for reading with church manuals and whatever books we have just lying around the church building, but he's reading way too fast. But I guess that's the kind of problem that you would want, so I'm not complaining!

Frank also said he would come to church, but then didn't. Not sure why.

We also had three newly baptized recent converts at church today, that were dunked the day before. I baptized Jean Doe (that's seriously his full name.), Elder Marsh baptized Clementine, and Ravo baptized his friend, Pascal. That's what it's all about!

By the way, check out how ghetto our baptismal font is. Pretty much the coolest thing ever.

We've been drop talking a lot of people that weren't progressing in an effort to look for more diligent investigators. My companion has suggested that we look for more part member families with the free time, so we will be doing that this week. There are lots of families here in Mahajanga where just one of the sons is a member, or a daughter, or a wife, so we'll try to get the rest of the family to recognize the truth. Most of them have learned before and chose to not get baptized, but saving their souls is worth another try.

We've finally been able to split our English class into two sections, for the people that are already pretty good and those that are not. Although honestly, even the lower level class people were pretty good. I taught the lower level, which basically consisted of our branch missionaries. We are going to really try to get them good at English, because mission president wants to prepare more Malagasies to serve in English speaking missions. So it would help if they already speak a bit before they get air-dropped in South Louisiana or something, with no translator.

I've been doing pretty well, and I think that my toe is doing better. I just remembered about when I went to the hospital for the second time to get a bandage replaced. I was talking to the old lady doctor while she cleaned up the wound, impressing her with my Malagasy skills, when some other person walked by the window and said to the doctor, "oh look, you got a white guy." She yelled back, "watch it girl, that's my son you talkin' about!"

So I officially have a Malagasy mama now. Cool!

There's a less active that we had worked with for a while named Mevasoa. Mevasoa said that the only reason he isn't coming to church is that he has rheumatism, and can't sit down for a long time. We thought about that and told him that if he comes he can stay off to the side, and stand up and walk outside when he needs to. Mevasoa accepted, and actually came to church yesterday!

His wife on the other hand, a nonmember, did not come. I talked to her for a while, asking why she wouldn't come to church or learn from missionaries anymore, and she said that she had prayed and gotten an answer that she should stay in her current church (some protestant branch). So there you go.

Mevasoa is still way diligent, and preparing to go to the temple. Good guy.

That's pretty much been our week. With another bright one straight ahead!