I note that as of this email, Michael has slightly less than 6 months remaining in his mission time.  What an experience he is having!  More great pictures, but you have to read the explanations at the end…

So some guy just randomly wandered into church yesterday. He, Bruno, apparently lives super far away, but still in our area, and had just finished working when he decided to come to church. So he wandered in around 10:15 and stayed until the end. We talked to him and set up a lesson for today at 6pm, at the church. I'll let you know how that goes. He just might be a golden investigator! 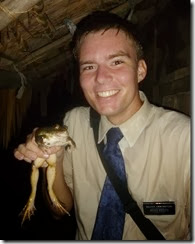 Justin, whom some of you may remember to be a super diligent investigator, didn't come to church. But he had told us that before hand. He is also giving us a good debate and argument about the gospel, trying to disprove us at every turn. Okay, not to disprove us. He just studies everything out really well, finds questions, and wants them explained. Fortunately, missionaries are pretty good at answering questions.

One of his questions was about our spirits and whether or not God has a body. We reasoned with him for a while, showed him a couple of scriptures, and finally had to show him a picture of the Plan of Salvation. We actually had to draw it, but since we were at the church there was a very handy whiteboard at hand. Handily.

We mostly just explained about the pre-existence and the war in heaven, since that's what most of his questions were about. By the end of it he was like, "oooooohh... that actually makes total sense!" 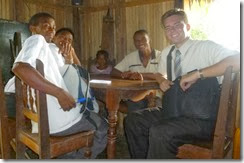 Now he just has to read and pray and get an answer that it's true! Then it's on to the waters of baptism and eventually the temple.

Nirine and Edmond, whom I may or may not have mentioned before, have yet to come to church. Nirine has been pretty sick, but they are planning to come. Their children, on the other hand, come every week. And they love it. The parents should be following soon. 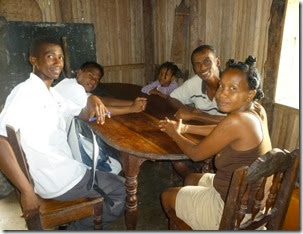 Seriously, it's the most devious feeling having investigators get involved with things at church. They start making friends, enjoying the lessons, and all the while the missionaries are lurking in the shadows, saying, "mwahaha...we've got you now!"

Speaking of Edmond, we were talking with him outside of a lesson, and asked what he does for work. He shrugged and said, "I go out to the middle of nowhere and hunt crocodiles to sell." WHAT!?

It turns out that there's a whole process to it. He sets a loop of cable down in the water with some food in it, and when the crocodile bites it, you pull the loop tight. The croc starts fighting, but eventually just wears itself out, so Edmond wraps the cable around the mouth, binds the feet, and throws it in the truck to be carried away and soled. Selled? Sellen? None of those sound right. 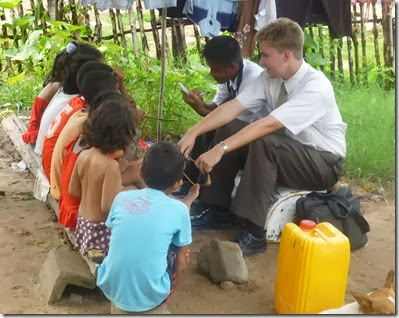 Anyway, he has a really cool job description.

There is also this kid named Patrick. He has been learning for a long time, but doesn't come to church. I keep feeling like he wants to, but he never comes. We've introduced him to members, brought Ulrich the recent convert to help teach him (they are old friends) which he really enjoys, but Patrick still just doesn't come to church. This week we found out why.

Patrick's mother, a die hard Catholic, won't let him. She says that it's a huge sin to change churches. You've got to pick one that you like and stick with it. I don't think that that's really how it works, but...

All of this came from Patrick himself, who admitted that he does want to come to church. We asked him to talk to his mom again and let him try out our church to see if it is true. More to come. 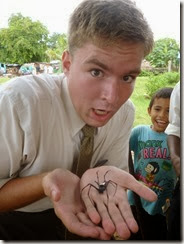 Here in Madagascar there are apparently zero members that know that they need to baptize their kids when they turn eight, so there are tons of kids that have to learn from the missionaries. It's actually pretty fun teaching them (although I wish my companion were better at teaching kids), but we could be out teaching new families and such.

As for Elder Rakotonjanahary, he has admitted that he isn't great at teaching children. The fact is that he teaches them exactly as if they were forty pastors that spent their whole lives studying the Bible. Which is how he teaches everybody else. But that's a different story.

The short version is that now we have like nine children that we are teaching. Most of them can learn together at once, so that saves us some time. They are all pretty well-mannered and listen and answer questions better than most adults. 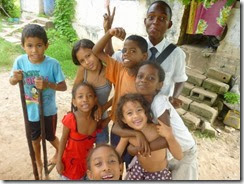 The kids have also been to primary for a good portion of their lives, so they know the basics of the church. All we have to do is straighten out a few misconceptions.

After we taught the big group of kids, Elder Rakotonjanahary found a dead spider in a tree and we took some pictures with it. I have to admit that grabbing it was probably the most terrifying experience of my life. I kept having this fear that it would come back to life and eat me.

The member that was with us (Nirine), who was holding the spider at the time, didn't help at all. He kept twitching and pretending to freak out when I reached for it. The little jerk. But Nirine is one of the funniest people that I know, so it was all good. 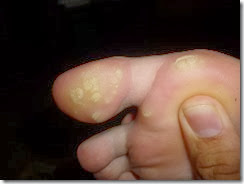 My final news is with regards to my feet. There had been some warts growing on my toe that were starting to get painful, so we had to go to the doctor to get them removed. Not a pleasant experience. They stuck a needle of anesthetic in to prepare it to be cut out, and I'm pretty sure that the needle hurt more than just cutting it out would have, but it's done now, and my foot is "heeling" up pretty well. Ha.

My companion has also had to get some dental work done, so we've been pretty busy for the last little while going to and from doctors. That being said, our stats from this week were still quite good, and this coming week is looking even better. 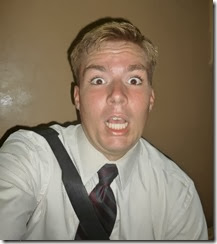 Have a great week everybody!

PS: The pictures that I sent are:

- a picture of my foot before the operation.

- a picture of my fear before the operation.

- Nirine caught a frog one night while he was with us, so we snapped some pictures. And then gave it to the person we were visiting to eat.

- pictures of us teaching one child with her parents. Her dad has been inactive, but is just now starting to come back to activity. The mom has always been diligent.

- pictures of us teaching the group of kids and playing with the spider afterward. 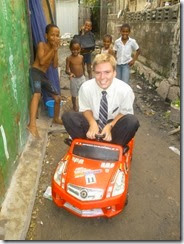 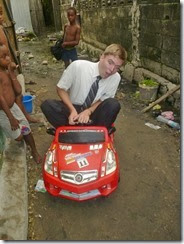 - pictures of this sweet little go-kart thing at one of our investigator's house, the one titled: "Cruising", and the other: "oh no there's a green shell bouncing across the road". I'll let you decide which one is which.