Our "Most Thunderous Investigator Award" goes to this guy we are teaching named Alex. Like "Alex the lion" from that one movie. He is a member of this church called "Let my people go", which prays on saturday, screams and shouts during prayertimes, and is just generally... odd. 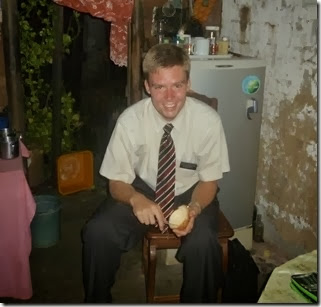 In the end my head was spinning just trying to straighten out his own contradictions, and we left him with a Restoration pamphlet and commanded him that he should read it. Alex seems like a really good guy, and pretty religious. So hopefully he'll read the pamphlet and learn a little bit.

I have realized recently that while I point and laugh at some things that other churches do and believe in (metaphorically), what they do is no more weird to them than what we do is to us. It's what they know and are told, so they follow it.

I have also learned that many people do not actually even think about their religion. At home, at work, in church, their minds are always away from church. We are commanded many times to think about what we have been told, such as Christ commanded when He visited the Nephites. Being aware of religion is good, but it's not going to get you anywhere if you don't mull it over and reason it out in your minds.

That being said, if there is one thing that I'm getting good at on my mission it's using my brain to actively think about the gospel. I mean, I've taken a step back and tried to consider God not having a body, or the idea of the Trinity, or things like that, and I just can't see it. It's just too confusing and weird. And when I ask other people about it, they say, "that's why the scriptures say that nobody comprehends Him!" Okay, maybe YOU don't comprehend Him. 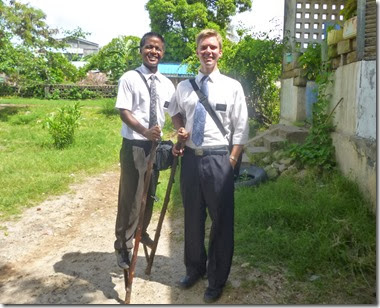 It's like Elder Stokes once mentioned from his studies (I think from Jesus the Christ?). The Jews, before Christ came, wanted things that were confusing and hard to be understood. So God gave them that. Nowadays, the gospel is decently clear, but people still seem obsessed with complicating the truth.

We taught a recent convert named Sandy this last week. He has been slipping into inactivity, and we have now found out that he was holding on to his old beliefs from before baptism. He used to be a Jehovah's Witness.

We decided to just start going back over the missionary lessons with Sandy to help him sort out any misunderstandings. The first point was about who God is. Sandy had a problem there. We talked back and forth for a while, and ended up talking about the resurrection. When told that everybody would be resurrected, Sandy said that that was wrong. We showed him a verse in 1 Corinthians 15 that says that "as in Adam all men die, so in Christ will all be made alive" (thank you random studies from that morning!).

Sandy claimed that that might still mean just a small group, only the elect, will be resurrected. My mouth was hanging open as I thought, "that's exactly the opposite of what the scripture says!"

That's something I'll never understand. People that blatantly disregard what the actual scripture actually says. That's one of the reasons that Bible bashing sucks, and I'm happy to say that I am participating in less and less of those.

We are going to try to help Sandy understand more about the Book of Mormon, and hopefully he will remember the way that he felt when he decided to get baptized.

Mission President came to Mahajanga on Saturday and Sunday. We had interviews with him on Saturday at his hotel room at this AWESOME hotel, and then met him for church on Sunday.

He coached our branch council, which had not been going very well before, straightening them out and making sure that everybody understood their responsibilities. That was awesome. And he did a bunch of interviews about the Melchizedek priesthood and temple recommends, which should all be good, and interviewed a couple that had had some problems in the past but is now ready for baptism. All in all, lots of interviews made for an effective trip!

We also set plans for two of the young men, Faly and Ulrich, to go on missions later this year. Ulrich almost didn't make it because he was baptized when he was 24 years old, so he won't even be able to start a mission until he's 25, but mission president said that that won't matter, as long as he enters the MTC before turning 26. So Ulrich will be able to serve a mission after all! Awesome!

So that's pretty much been our week. It sounds like Mom was pretty lucky to fly out of Oregon before the snow hit. Are you aware that that might be more snow than I saw in my Winter trimester at BYU-Idaho? In IDAHO? And Madagascar, since it was first created, has had about as many total inches of snow as Dallin H. Oaks' head has hairs? I swear, snow avoids me. But I hope it was fun.

Plan for the best week of your lives, and you just might have it!